Today was frustrating in many ways, but I can still give you my "trailer philosophy" spiel.

It wasn't possible to do as good of a mock-up as I wanted. Duct tape won't stick to the fiberglass at all to hold the cardboard, and the spray adhesive I bought to stick the cardboard pieces together wasn't holding very well either. Things I'd previously put together would fall apart when I turned my back. 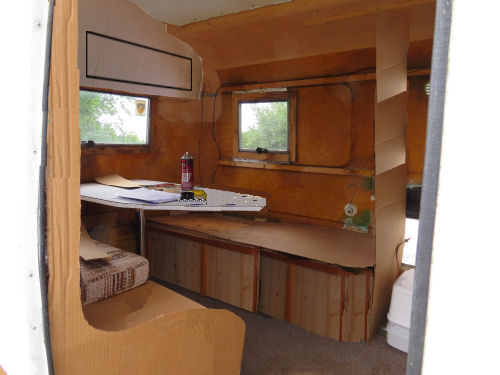 In addition to that, I discovered when I went to treat for the wasps that I was out of spray. One of them was getting a bit aggressive today, and I didn't feel like fighting it for the space.

I went to the store and bought more storage units, and wasp killer. Just a while ago, at dusk, I covered every square inch of skin, and put on my head net, went out and sprayed under the ceiling board (not sure what else to call it- another addition by the previous owner). Never saw a wasp at all. I was expecting several angry ones to come roaring out of the open end at me. So I guess that is good. But I need them to be dead or highly disabled before I take that board down, so I sure hope they were all at home.

Anyway, all of these pictures had some of the "mock-up" done digitally. I'm glad I took pictures as soon as I was done with as much as I could because more of the glue had come apart when I went out just now to spray.

The whole planning exercise was very much worth it, though, because I have avoided a couple of space usage/access errors I might have made.

First, some philosophy. The way I'm redoing this trailer has nothing at all to do with resale value. The level of primitivity (is that a word?) will not appeal to most people. What I want is to:

1-   make the interior into a portable office so I can sleep, write, work on the computer

2-   keep the weight of the infrastructure to a minimum, foregoing some amenities most people think are necessary

Let's talk about design features for #1. Still looking at the picture above. I know I'll never switch the table down to a bed every night and back again every day. So that had to be "fixed." Solution- the long couch you can see across the far wall is long enough for me to sleep on. However, the table can still be put down and the back cushions put in the middle to make a crosswise double bed if Marie or someone is with me.

Second issue- the table was way too high for me to write/compute at. Solution, easy- I already bought a shorter post for the table, and the one you see makes it a perfect height for me to work at.

There needs to be lots of surface space. Solution- the shape of the table is going to change a little to make it longer. I tried to stretch it digitally, and sort of succeeded.

The narrow "bar" going up the side to the left of the door is a plywood structural component that will go across the entire top of the trailer and fasten to the other side. 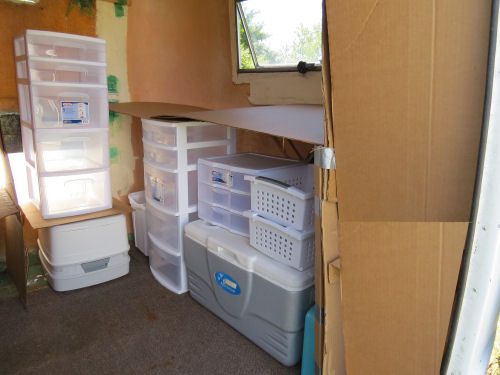 On to #2- the weight. I've been researching what people have done with their little trailers for hours and hours over the past few years. Almost all of them include miniature appliances that take up huge amounts of space and add a lot of weight. I did find one person who used these plastic drawer units successfully. I decided this was the way to go for me. Don't worry about shifting and the drawers coming open while traveling. I've got all those issues solved in my head.

I'm taking out the propane tank. It's not worth messing with just to cook a little. I have my little Coleman stove, and if I can plug into electricity, I'll have a hot plate and mini crockpot. I already bought a tiny ceramic heater (about 8" square) that heats the trailer just fine in cold weather. I'm going to get a tower fan for cooling. We learned that fiberglass trailers don't get nearly as hot inside as metal ones anyway.

I'm not putting in a water tank, sink, or graywater tank. I have a 2.5 gallon water jug, and found a place to order another one the same size if I want (haven't decided yet). It's much easier to carry a small jug to a faucet than to take a trailer to a hose. I have a dishpan.

I'm not putting in a refrigerator. The cooler I have is "X-treme" and holds ice very well even in very hot weather. I don't plan to keep things that need a lot of refrigeration. I know how I eat "on the road," and we (Marie and I) have been car camping out of the cooler for years. Low tech, and works fine.

The tall space at the left of the picture (straight on when you open the trailer door) is the "clothes closet." Essentially, the porta-loo is at the bottom below the shelf. If you need to use it, pull it out and lock the trailer door (since the whole trailer isn't bigger than a lot of bathrooms!). That drawer unit is for clothes and personal items, with a space to the left with hooks at the top for hanging a few clothes "in current use."

These two segments will have curtains to cover the drawer units. Sort of 1930's retro cabin kitchen look. Digital mock-up. 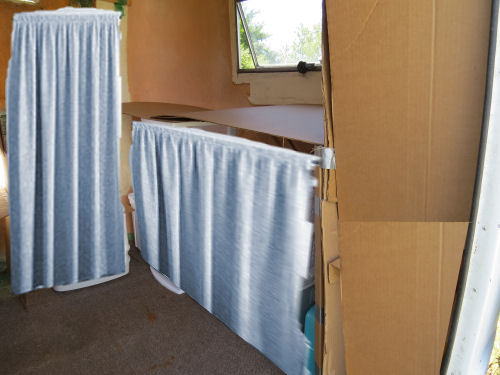 Storage- #3. As you can see, these drawers give me lots of compartments without adding hardly any weight. All the space under the far couch (except the wheel well, of course) is now open for storage. There was an unusable water tank under it before. The near couch has the electrical fuse box under it, but there is still a bit of storage space.

There is going to be a "broom closet" just to the right of the trailer door as you enter. This is a good use for this oddly shaped space, and as you can see will hold snowshoes as well as brooms (wink!). If I want to take the skis anywhere, they'll have to go in the car or flat on the floor. They're too long to stand up the trailer! It will be the one space with a "real" wood door. That's partly so things can't be shifting, and partly so there is a flat surface on which to mount a mirror.

I'm still conflicted on whether to rebuild one of those overhead compartment spaces over the rear end of the table (cardboard mockup digitally added in first picture). I really don't like these spaces. I don't like doors that lift or doors that pull down. Doors that open side to side are too long and get out of kilter easily. Sliding doors are a possible option but difficult because of the rounded shape (you have to have small access openings). There is a bunch of space up there, and all these trailers come with some sort of storage compartment to use it. I don't have to make up my mind about this just yet. An open shelf for books would be perfect, but they won't travel that way. Maybe some sort of snap-on canvas cover so they can't fall off.

Broom closet picture- really a bad pic, and bad job with the cardboard, but I think you can get the idea. Towel bars, hooks, etc, for kitchen can go on outside wall of broom closet facing the kitchen counter. 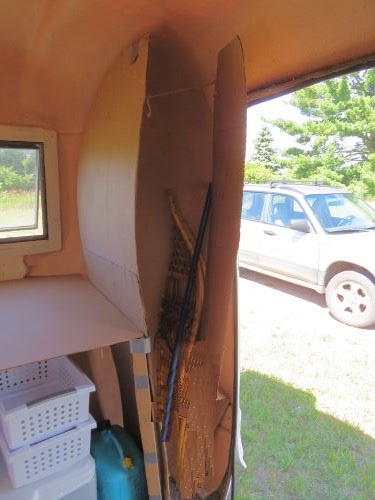 Function- #4. Well, I've thunk and thunk, and drawn pictures by the dozen and looked at what at least 100 other people have done with these tiny trailers. There are about 2 basic floor plans that give you seating, bed, and kitchen spaces. After that, it's just tweaking the details. I did see one that was truly unique, and although I like unique, it wasn't a very practical idea for how I want to use the trailer.

Now for the situation that is making me pretty unhappy today. The exterior surface has deteriorated a lot in the 3 1/2 years since I bought the trailer (how can that be?). I may have to switch from interior to exterior thinking. If I need to remove the windows and prep the surface and repaint (or gel-coat, but I'm thinking paint), now is the time to do it when it's pretty well stripped down. I'm being told I can just clean and wax it for now, but it will still need to be painted in a couple of years. And I do have three holes in the shell to patch, one of them being that large one that was behind the air conditioner. I was prepared to just let them be filled but ugly for a while, but maybe I need to do all this now.

I've been reading more and watching more videos today. At least we have unlimited data now, so I can do that without guilt.

This has gone on long enough, but that's 30 months of pondering and sketching and researching boiled down to my (mostly) final decisions. And how am I going to make time to do all this?

You have this planned out well. By the time you're done with this you'll be an expert on the subject