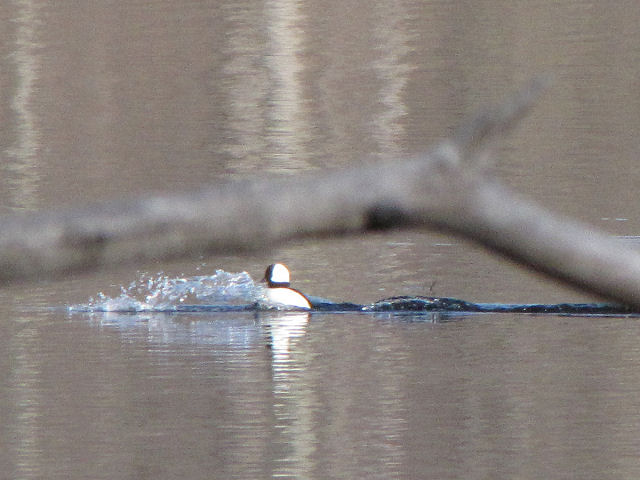 I'm having a hard time getting all of these photos processed and labeled properly. I've learned SO much this week! The cute little guy above is a bufflehead duck. I have learned that it is a type of goldeneye duck. I also got some video of one on Nordhouse Lake. There were lots of ducks there, including mergansers (I couldn't get pix), and the one you can see below, a ring-necked duck. I really don't know much about waterfowl, and I don't think I've ever seen this one... at least that I knew what I was looking at. 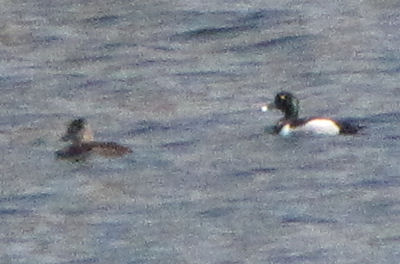 I had to hunt through my bird book. I know it's name is "ring-necked," but the book says that distinguishing features are peaked head and a bold white stripe around the bill. So there you have it! With a brown mate, of course.

This is all leading up to a not-very-good video. But hey, it's fun because I took it! You can see the bufflehead acting duck-ish, and then the ring-necked ducks show up.


Now for some LBBs. I hang around with enough real birders to know that means "little brown bird." Yeah... here's one. 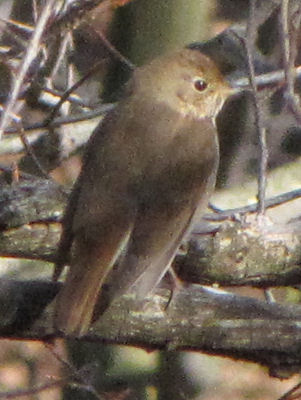 I think this is a veery. I sort of know what their song is- a descending set of whistles. This one wasn't singing for me. In fact, I couldn't tell what it was till I got the pictures on the computer. Maybe I still can't tell. Maybe it's a winter wren with it's tail down, but I don't think so, because it never put it's tail up. Maybe one of you fine readers will know! That's one thing about having a lot of zoom. I now can actually take pictures of birds. That usually means that I can take not very good pictures of birds.

Nevertheless, being able to take the pictures myself and add that to the memories of the observations may mean that I learn more birds.

Finally, for today, I'm just linking to a video that I did not take. And the video isn't the interesting part. But it was taken to capture the song of the winter wren. We heard one on the hike, Saturday. One of the other hikers knew what it was, and I may actually remember that one now because it was very distinctive. That's one thing about bird songs... my audio memory doesn't seem to be good enough to remember something to look up later.

I'm enjoying meeting these birds. The shot of the little brown birds is wonderful, Shark!

I love waterfowl watching. Before I had little kids I'd go for many trips to the delta and flyway in CA to do birding. When they get bigger we will for sure go and do more again. Buffleheads are very cool to see. We had a few at a stock pond nearby this winter. Birding is FUN!

To me, it looks like a young fly catcher, but I'm not expert.

Wow bird days. When is mine?

it must be bird day, I've seen quite a few posts today with birds in them. That's ok though because I love them all.

Hi Carmen- Hope you came back to see the video. I wish I really could be sure what the LBB is. I'm currently leaning toward the wren.

Julia- You have to get up in the morning to be a real birder. Not me!

Ann- yes, they are migrating. That, and mating are the reasons that spring is so great for seeing birds!

Bring on more of the bird days. I love that little brown bird, he is exquisite.

Jo- exquisite? OK, then it has to be the wren! Not scientifically, of course, but that's how I feel about wrens.