Where Am I Going?


I was going to show you several flower pictures today, but I'm getting bogged down in getting them up on the photo web site, and I don't want to let a little discovery slip by without mentioning it. But first, with some digital editing I can bring you a picture of Ellen and me from yesterday, together.

We've also discovered that we share a love of poetry too. We got to talking more about poems for children and she pulled out a copy of A.A Milne's When We Were Very Young. That was one of the books that I had read to me, and then read myself, what must have been 1000 times. But I haven't looked at it for quite a few years now.

Here's my discovery... So many of the same poems that I remember as my favorites still speak to me deeply now. Yeah, I know they were meant for children. But poems for children didn't used to use grade level vocabulary and word length. They use themes that speak to children, and are sometimes funny just because of their meter, but they sure aren't One Fish, Two Fish, Red Fish, Blue Fish (OK, I like that one too, but it's not the same). These are poems that use language. I would love to quote a whole lot of them to you, but I'm going to settle for one stanza of the poem "Spring Morning." Seems to still pretty much speak to who I am.

Where am I going? I don't quite know.
Down to the stream where the king-cups grow --
Up on the hill where the pine-trees blow --
Anywhere, anywhere. I don't know.


I'll end with a picture of the common toothwort, Dentaria diphylla. It's a cousin to the cutleaf toothwort I showed the other day. Flowers pretty much identical, but look how different the leaves are. 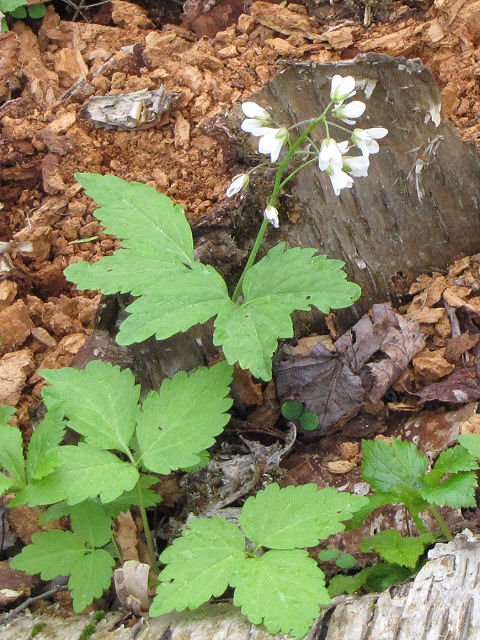 Just one final question to ponder... Was I shaped by the poems, or was I already programmed by age two or three so that certain poems were more or less destined to be my favorites?

Robert Frost my favorite.. Have a great week

I would love to hear the whole poem "where am I going" I'll have to see if I can find it.

Same here. Grew up with Longfellow and his poetry still touches my heart.

I think that by someone taking time to read poems to you, then you were destined to have those poems as favorites along with the favorite memories.

And..I love One Fish, Two Fish, Red Fish, Blue Fish too! I read it so many times along with Go Dog Go, to my sons and now my grandchildren.
Maybe I will look for A.A Milne's When We Were Very Young to read to them and to me.

Thanks for the visit and comment.
Have a great day.
Pam

I never cared for Dr. Suess. I always thought his stuff was a bit too wacky and a lot of his words didn't make sense. I think poetry for children doesn't have to be silly or wacky either. Lately, I have been enjoying Mary Oliver.

I don't know the answer to your question but I think it is a little bit of both. I know, easy answer. I love Dr. Suess, they don't often mean much but they were my childrens favorites if for not other reason than I always got tongue tied and they giggled and giggled.

Hi Joe- Yes, Frost is a good one too.

Ann- I found a few Milne on line, but wasn't sure if it's still under copyright.

Hi Pam- thanks for stopping by. I know kids of any era would love Milne.

Hi Jen- Thanks for stopping by. Seuss is great for its exploration of the sounds of language. I vote for some balance with more meaning too.

Milne is still popular over here, still in print, I have lots of favourite poets, the one that comes to mind is William Blake I love the Tiger.

I think some things intended for children are always the best. This poem is a good one. I have always been more influenced by music in the same way as you have by poetry. I think the flow of the words is the same though.

Carol- Yes, the Tiger is a good one!

Ratty- The things for children really get back to the basics- not much masking of those with details that complicate.

I guess I missed this post first time around. I've written a couple of poems for children. They are not in my poetry book, though.

Carmen- I find that poems designed for children often speak to the basic parts of who we are rather than complicated "issues."