Five years ago (wow- I've been blogging since before then!), I did a post on Big Bluestem, Andropogon gerardii. I mentioned that it had another name, but almost didn't get around to saying that it is also known as turkeyfoot.

In those years, the patch in my backyard has grown. It's an impressive jungle in August and September, as the stalks get more than six feet tall. It's native, and I'm happy to have it. It's thriving so well I don't feel guilty about mowing my trail through the middle of it. I like to walk through the grassy forest. 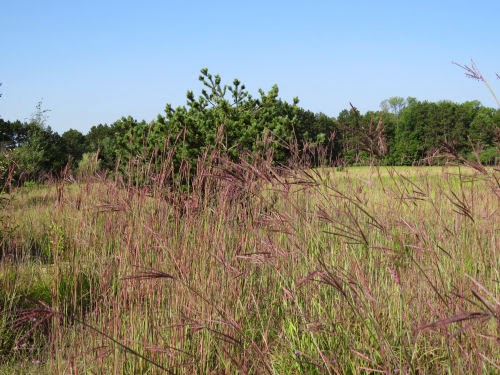 You can see that it's purple-ish in hue- thus the bluestem. And when you see the seed heads against the sky, there are the turkey feet! But what are all those little dots? 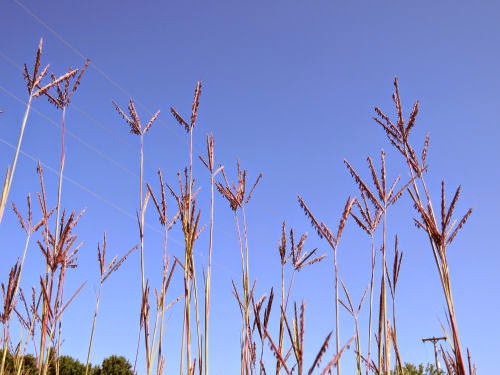 Those are the anthers, spreading pollen all over the place- making more turkey feet! 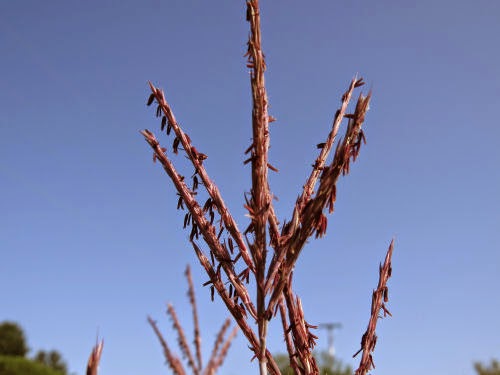 Sadly, it's not an edible plant. But, I'll take pretty and native.

A wonderful grass, but it doesn't grow up here in Ontario.

I can definitely see why it called Turkeyfoot. It sure looks nice against that blue sky

hello sharkbytes its dennis the vizsla dog hay i hav never seen a turkee but trixie has and she ashoors me that this is in fakt wot there feets luk like!!! wow those turkees must be jinormus!!! ok bye

I think we have that over here too. it spread very fast