Day one... we walked to a nearby McDonald's to get dollar sundaes, and on the way back we looked up. Good thing the hot air balloons were higher than they looked. No crashes or entanglement in wires occurred. 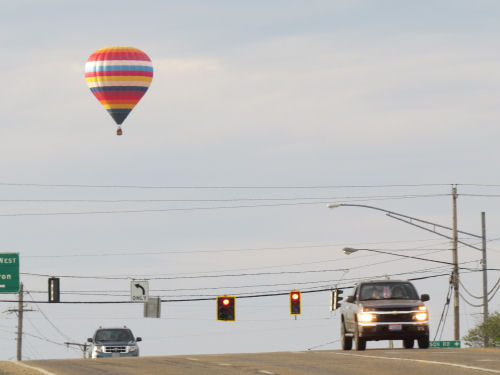 Toward the end of the hike, we approached this large blue building. Do you know what it is? 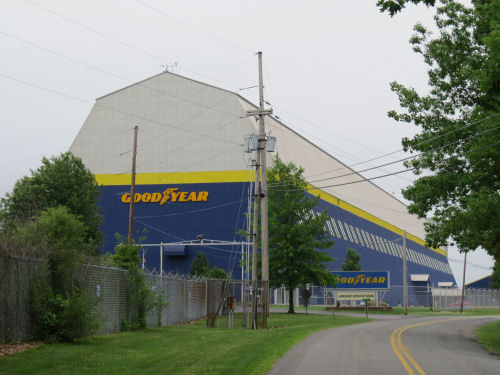 It's the hanger for one of the Goodyear Blimps. This one is "The Spirit of Goodyear." 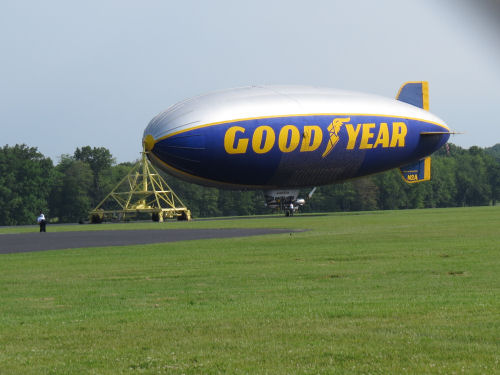 The map/guide said hikers might get to see it if they were lucky. We were lucky! We didn't see it take off or land, or even in the air, but we watched it move with the breeze on its mooring and took pictures. They were preparing it for a trip somewhere because it had a convoy of trucks and company vehicles lined up ready to move out.

In this shot you can see the light grid on the side that they use to spell messages. 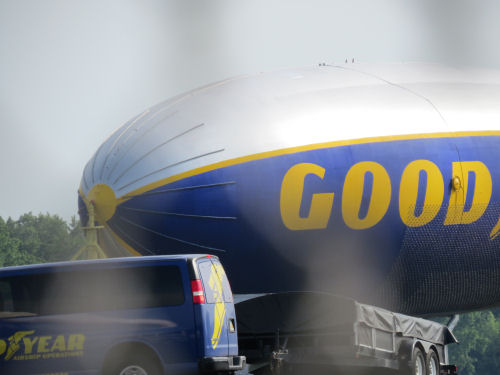 Apparently this hanger is also the home/construction site of a new breed of blimp we did not see, a semi-rigid airship. You can watch a time lapse of that project- Building Wingfoot One. The hanger is located on Wingfoot Lake. I'm guessing the lake was named for the Goodyear logo.

Once, long ago, our family had a reservation to take a ride in the one based in Florida (there's also one in California). But the flight was cancelled because of strong winds. So close! It was neat to see this one.

I've seen many a clothes hanger, but this is the first blimp hangar. That's an interesting story and I like the pictures.

They have a balloon festival every year not far from us. It's pretty cool to see the sky filled with them.
I had no idea that a blimp had it's very own hangar

They have a balloon festival every year not far from us. It's pretty cool to see the sky filled with them.
I had no idea that a blimp had it's very own hangar

Though I've never seen it nor even pix that I recall I did recognize its purpose! Never ridden in a blimp, but I loved the trip in a hot air balloon.