Because I am planning to do this upcoming hike solo, and in case I want to take long hikes alone in the future I want to be able to at least keep a minimal charge on my phone. After all, there's this big sun in the sky sending power down all the time, if I can just grab some.

You may remember that I won a solar charger two years ago (see link below). I said right up front it would probably not be a backpacking item because it was too bulky. Well, it was a complete bust. It wouldn't even charge the phone a little bit. I gave it away.

But then I saw an ad for this little thing, and it only cost $20. I'm willing to try something at that price, and it was getting great reviews. It's just called Solar Charger. It's about 3" x 5" and less than 1/2" thick - nice size. 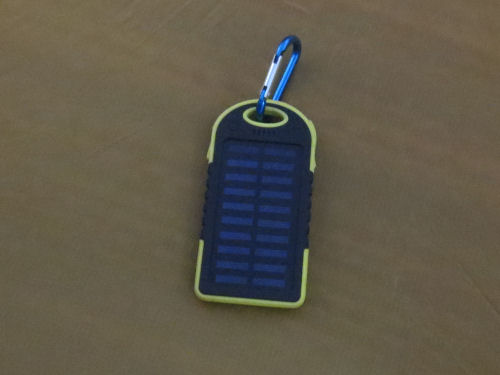 But it came with NO directions. It was supposed to have a flashlight. I put it in the sun and it seemed to charge. The little blue lights lit up when I pushed the button. It did come with a cord, and a carabiner, although the one supplied was too small to go through the hole. I replaced it with the one you see here. 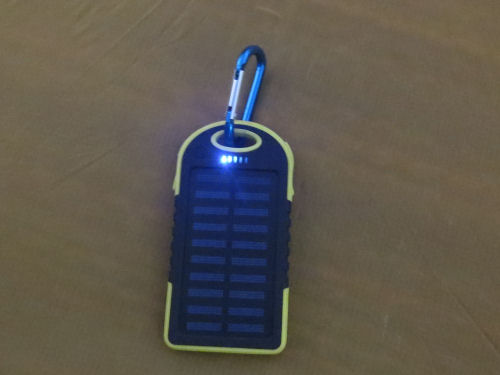 But I couldn't get the flashlight to turn on, and it wouldn't charge my phone at all. Bummer.

Ester managed to find some directions on line, which I can't find again, but no matter. You push the button twice in succession to turn on the flashlight. 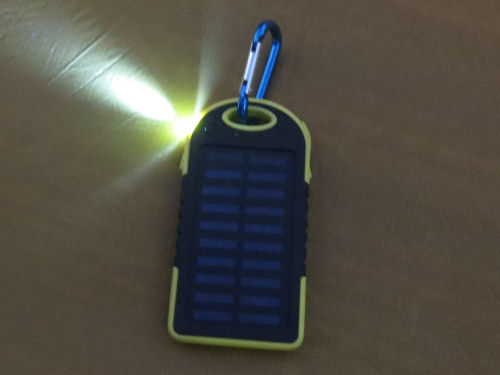 I don't think I'd want to use this much because it would probably deplete the charge pretty fast. But the big issue was still to charge the phone.

Brainwave! I tried a different cord. It works. So the cord that came with it is no good either. But I've been trying a number of scenarios with my own cord. This picture is not an accurate representation. There's no way you'd ever get a phone to 100% with this. The phone was fully charged when I wanted to take a picture. But if you look closely you can see that it does say "charging" with the phone plugged into the charger. 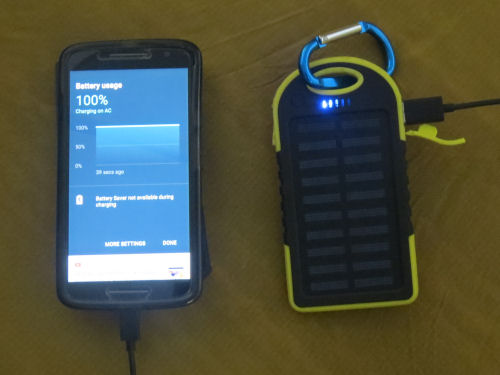 Today, I tried to keep it plugged in while walking to see if it would just transfer the energy it was taking in to the phone, but that did not seem to work.

I think the bottom line is that it will allow me to keep the phone at a level where I can post a couple of pix on Facebook a day and send my position to someone for safety, and still have enough charge to send a message if I need help (and can get a signal, which is probably going to be an issue).

So, for the price, I think it will work. Weight with carabiner and cord: 6.5 ounces. Acceptable.

The other electronic problem is the camera, which takes special batteries and can't be charged without an outlet. I'm going to take three and hope they will last for the 7 or 8 days between civilization visits.

In other news: I've been trying to get this hike planned, but it's a challenge. There's not a lot of information, and there could be some problem areas. I'm pestering some good friends a lot for info. Stay tuned.

I bought some kind of charger once and it didn't work at all. At least this one will give you enough of a charge that you'll have your phone in case of emergency. I don't get why they wouldn't include some type of instructions. I bought something else that had no instructions included.

Joan. One thing I have discovered with a phone in the backcountry with no service is that the battery goes down fast looking for a signal. Set the phone to airplane mode and communicate via text. Text does not need a strong on long signal.