What do those three things have in common? Today was not the day I had planned AT ALL, but it's all good.

At 12:30 in the night a huge flash of lightning woke me up. Uh-oh! The paint on the trailer was probably dry enough to not be harmed, but all the hardware and gaskets were off the door- big hole instead of the latch. So out I go in my pj's and sandals to put the door back together.

We must have gotten a good rain because everything was totally dripping wet this morning. No getting out there early and putting on the next coat of paint!

Cathy said, "Why don't we walk around Pentwater this afternoon and look at gardens?" I remembered the walking tour Ellen and I had done a number of years ago (see link below), but the guide was Ellen's, not mine. Called the C of C and they have an updated booklet.

At eleven, I went to check the trailer, thinking I might at least get the light sanding between coats done. Getting wet didn't seem to hurt yesterday's paint job, but the yellow seemed just a little softer than would be good to sand. So... no trailer work today! Off we went to Pentwater.

We enjoyed all the beautiful plantings in Pentwater. People seem to go out of their way to create lovely gardens in that town. 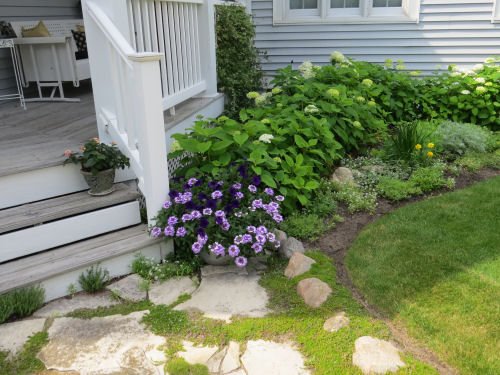 We walked to 48 of the 49 locations on the tour. The one we skipped was a church we both knew, so we read about it, but didn't feel the need to walk the extra blocks. I'll try to show you different houses from the ones I featured the last time.

This house is huge. Federal style built around 1870 as a resort hotel. The guide says the porch was added later. It looks to me as if the original was the large square, and perhaps the attachment at the back of that was the summer kitchen. Or perhaps it was added later because the section farthest away is a carriage house/garage. But we couldn't tell if that was an original building or something newer that was made to fit the style. There is also a big enclosed sun room on the side you can't see in the picture. Impressive house. 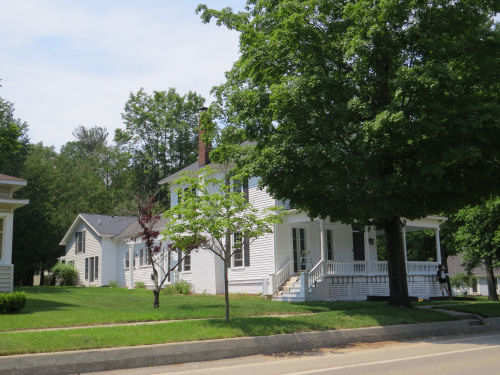 This one is called Pentwater Cottage style, also built around 1870. I'm not sure what constitutes that particular style, but I've always thought it is a very attractive house. In the spring the yard is full of blue glory-of-the-snow flowers. 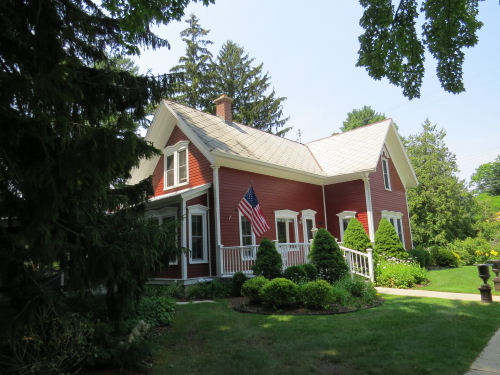 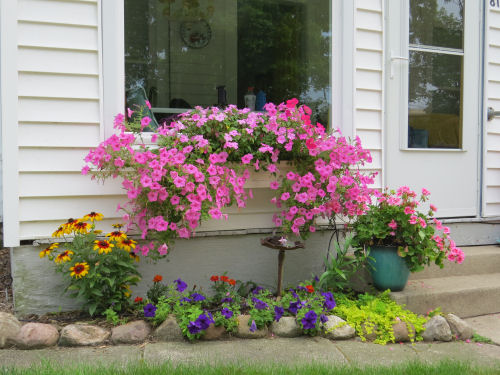 This one is labeled Early Victorian. I'm an architecture semi-novice, but I would be interested in knowing how it got that designation. This does not say "Victorian" to me. However, it has an interesting history. It was owned by the daughter of Charles Mears (one of the early lumbermen of Pentwater), who wrote a history of her father (for whom the State Park in Pentwater is named). She also donated the land for the park. 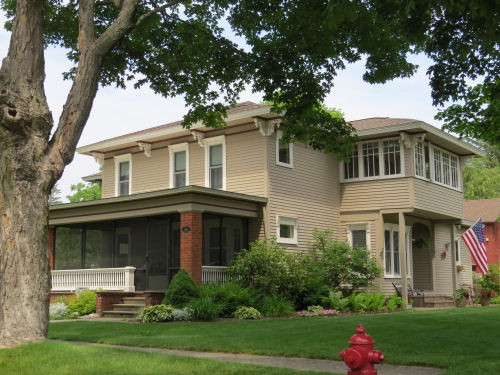 Yup, it was hot, although always cooler near the lakes. We broke up the walk with a stop for ice cream! 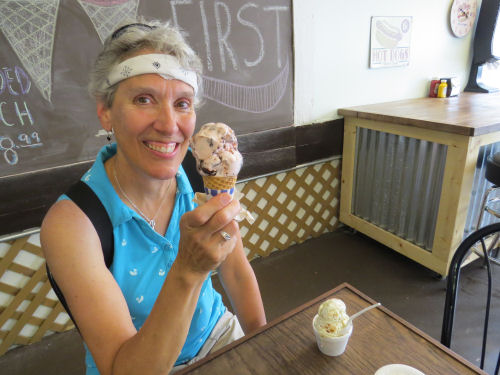 And I'll end the house tour with a Folk Victorian house. This was a new label for me. But I looked it up, and it's basically the poor man's Victorian. It was popular from 1880-1910 when the Craftsman look became all the rage. People built simple practical houses and spruced them up with some Victorian trimmings, often mass-produced, as mills became mechanized and railroads could deliver lumber and trims across the country. 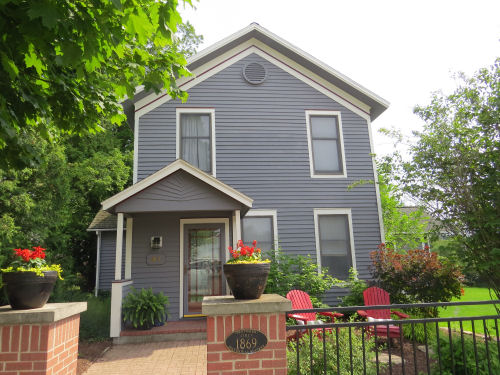 One more flower picture. This just says "summer at the lake" to me. 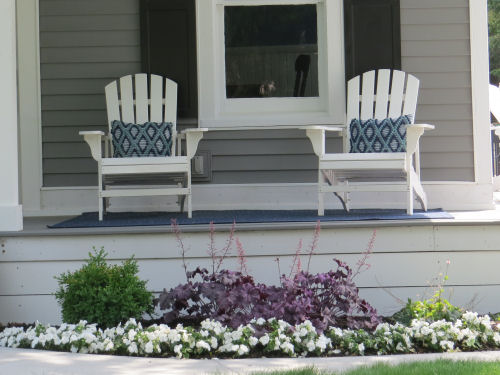 We walked something between 3.5 and 4 miles. We were more interested in the houses and gardens than our mileage. But we were walking (except for the ice cream break) for 3 hours.

In other news: we contemplated a bicycle ride. So I spent some time getting my bike out and checking it, but it needs a new tube which is now purchased. But that meant I had to fire up the air compressor, so I also topped off my car tires and the trailer tires. Since I couldn't sand the trailer, I did do a little volunteer stuff. After the hike I went to buy some groceries and the tube. So... nothing went as I thought the day would go, but it was great. And just after I got home the skies let loose with a real downpour! Supposed to rain for two days, so I won't be painting any time real soon.

I like those houses. They all remind me of houses I see in the next small town over from me.

Ann- it's a neat tour- I love old houses, and having the book to tell you local history about them was neat.

Lulu- It is ice cream by the local (made in Ludington) producer, House of Flavors, which trades off with another place (Mooville) at being voted the best ice cream in Michigan. I had key lime pie and Cathy had Amaretto Black Cherry Moose Tracks