Tonight, I'll take you back to Camp Comstock. We'll talk about my first year at the overnight camp. This was the summer of 1958, and I'd just finished 5th grade. There were huge changes going on in my life.

Let's clear up one detail right away. These pictures are nothing wonderful. Their only claim to fame is that they are authentic. I had gotten a Brownie Camera for my birthday in April, so suddenly I was the one taking the pictures. I'm not in any of the camp pictures. I did find a couple from that school year, and I'll stick them at the end. This was labeled "the girls of the Frontier Unit."

I'm not sure what the cluster of people on the left is doing. This might have been some kind of first aid drill, since it looks as if there is someone on the ground. You can see Cayuga Lake in the background. And it sure looks like we had just had rain. (see note about Duchess) 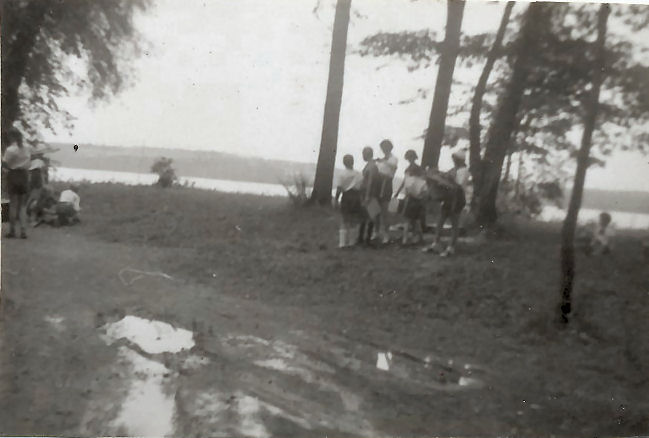 Frontier was the first unit everyone went to. It was located on Crowbar Point at the southern boundary of Comstock. If you walked past that point, you entered Camp Bailiwick (see link below for the explanation of all this if you missed the earlier post and if you care). It wasn't until years later when I was a counselor at Bailiwick that I really understood you could connect the camps on foot. As campers we were definitely not allowed to stray.

Here's the campfire circle at the Frontier Unit. The lane leads north to the Lodge. Every girl in Frontier was either ten or eleven years old, and had just finished fifth grade. Somewhere, I have another picture of Crowbar Point from that unit, but I could not locate it today. It shows the Adirondack (three-sided) shelters. They had roll-down canvas fronts and standard metal camp bunk beds. This was one of the two cushiest units in the whole camp. I guess they wanted us to have a little more comfort since it was the first extended time away from home for most of us. The camp session lasted two weeks. 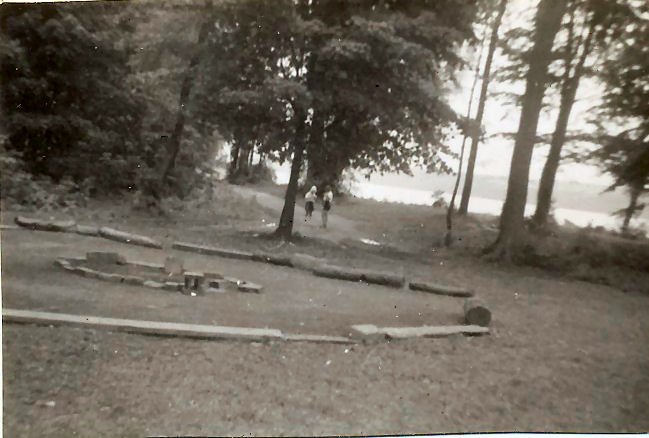 Here are my counselors that year. Pixi and Tommy taking a pose. 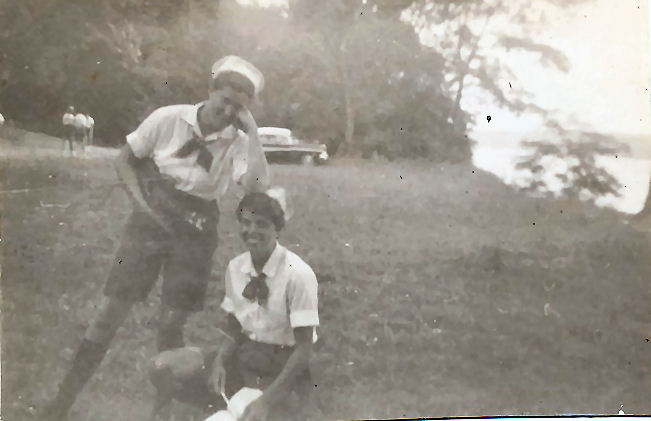 And Duchess. Of course, we never knew their real names. In the picture above you can see that Pixi is holding a ukelele. I'm sure at least half of the counselors played a ukulele. Probably most of them had instantly learned how when they were hired. How else would so many college girls have known how to play a ukulele?

I do remember Duchess. She knew lots of songs. Of course, almost all the camp songs were new to us that summer. Maybe we had sung a few of them in our troop meetings. Most of them were Girl Scout standards like "Make new friends, but keep the old, one is silver and the other gold." Of course that should be sung in a round. I remember huddling in our Adirondack shelter with the canvas front rolled down against the wind and rain while Duchess taught us "Tammy," a popular hit of 1957 which was actually nominated for Best Song, but I didn't know that! 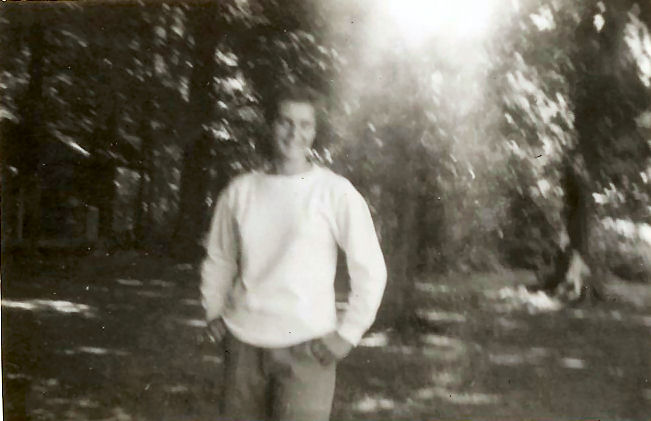 As I continue this series, you'll get a tour of the units at Comstock. Each one had a song. This is how the one for Frontier went:
We live way down on Crowbar in a unit called Frontier. Where everybody wishes they could come back each year. We work, we sing, we play. We learn more every day. Oh, Frontier, Frontier, down on Crowbar, we know you're best by far."

We ate almost all our meals at the lodge (although I'm pretty sure even the little squirts on Frontier were allowed to cook out a few meals). I don't have a picture of the lodge from that year. But you'll see more of it later. The units would often have contests to see who could sing their song the loudest.

My album says this is Jay, the Assistant Director of the camp that summer. It amazes me to think that these counselors, who were barely more than kids themselves, have to be in their 80s if they are still alive. I wonder if they knew how much they were changing little lives. 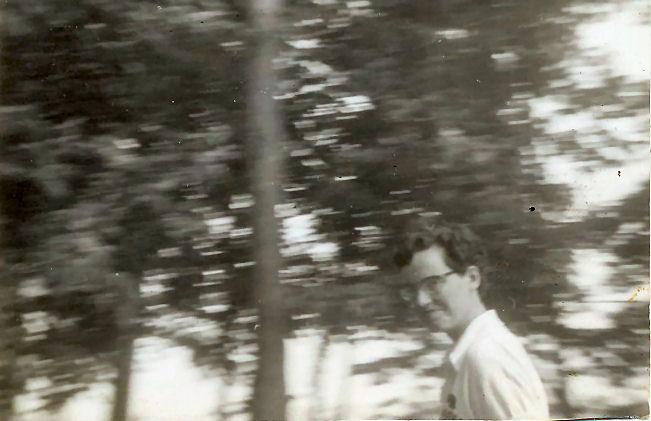 As I said, it was a year of many changes for me. The previous summer, when I was nine, is the year I felt as if I grew up. My first dog had been killed in the road, which nearly did me in. My Granny moved to the town I lived in because my mother needed to take a job. That meant I now had to spend school days in town with Granny til Mom got home from work.

This did not go well. The grandmother I'd always adored, and who adored me, turned out to be pretty horrible. She wanted a little girl who would dote on her, and what she was stuck with was a 150% tomboy who wanted to jump off roofs and build fires.

In the fall of fifth grade, I broke my two front teeth off on the gym floor. Of course, they were my permanent teeth, so I spent a lot of that year in a dentist's chair which included having the nerves burned out of those broken teeth. Fun. Then I got glasses, which I proceeded to break about once a month because I was so rough and tumble. I had a bunch of warts burned off my feet. I also found out that I was going to have to wear orthopedic shoes, maybe forever.

And at the end of 5th grade, just before camp, Mom switched eye doctors and he said I didn't need glasses, but I did have amblyopia- lazy eye. So, days before I went to Comstock, only my second time away from home for more than a couple of days, I started wearing a patch over my right eye, the good one. The upshot of that was that I could see almost nothing. But I wasn't about to admit that! I remember starting camp and just barely being able to follow the road out to the Frontier Unit. I quickly learned that it was a great aid in getting people to feel sorry for me.

Interestingly enough, the sight in my left eye improved very quickly. It started just before Comstock at 20/200, and at the end of the summer was up to 20/30. I do know that within a few days, I was easily finding my way around camp and not having any trouble participating in the activities. We got to build fires without sneaking around to do it (I won the fire-building contest). We took swimming lessons (I was distressed that I was only a green cap that summer- which meant intermediate swimmer). We earned badges, we learned to row a boat (and were promised to learn how to canoe if we came back another year), we studied first aid, we did crafts, we sang and sang, we hiked, and we had campfires in the evening. No dresses were involved.

I knew I was in heaven. These two weeks of every summer at Comstock became my safe place. I could be "me," and no one taunted me, or told me to act like a girl.

Now for the Joan of 1958. Actually, this is 1957- first day of school for 5th grade. I remember this dress. It was actually one of my favorites. The darker portion was a blue-gray. It only looks like a jumper and blouse; it was all one garment. I'm wearing saddle shoes, so I hadn't yet gotten the orthopedic ones. I still have my own teeth. 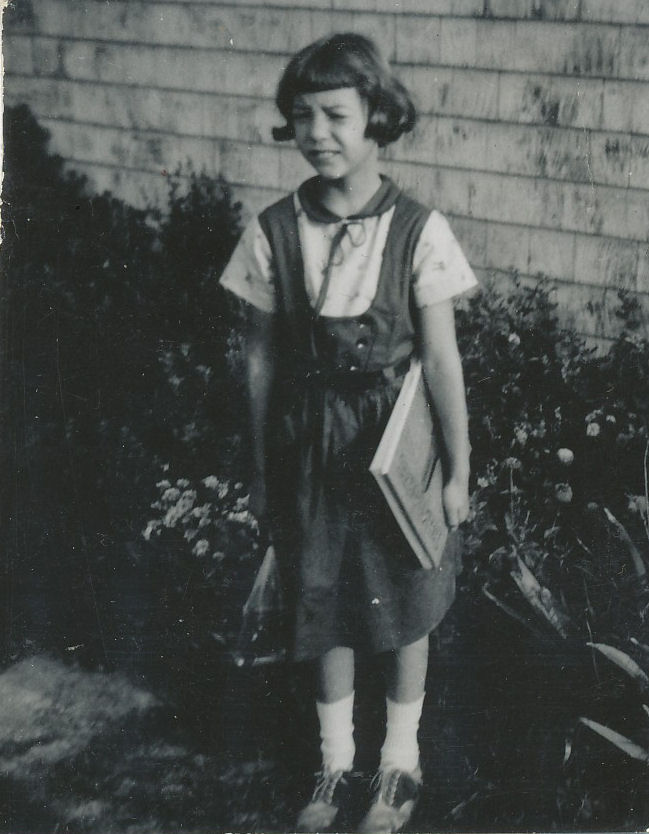 I did find one other picture from 1957-58. I'm in the swing my dad installed in the cherry tree for me. I don't remember this dress at all, but the moccasins I have on were ones I made from a kit. They were some early form of vinyl, laced with plastic boondogle cord. I loved making things! Look how big my feet were! They were the same size they are now, which is actually quite small, but I hadn't yet grown into them. I was certainly all elbows and knees. 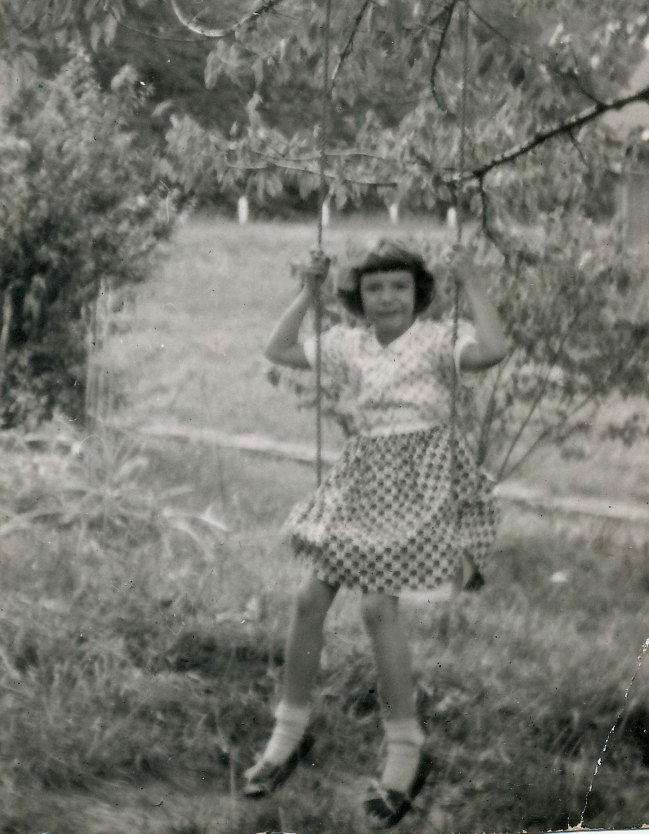 Don't spend time wondering about the dresses. Girls had to wear dresses to school back then, so I'm wearing one in a lot of pictures. But when I was on my own time, I'd already discovered blue jeans.

So now you've heard about my introduction to Camp Comstock. The next year's installment will appear on some slow blog news day in the future. There are a few places/people in my life that I describe as "they saved my life." I do not say that lightly, and Camp Comstock is one of those places.

In other news: I edited, I wrote a chapter, and I did a whole lot of putter-y things in the trailer. That included a run to Wal-Mart (which I hate) for three things I can only get there. They did not have any of them. Bother. So there will be yet another Amazon order in my future.

This camp sounds like a wonderful experience. I never went to one where we actually spent the night. It was just a day trip kind of thing.

Ah, the memories! Swimming, canoeing, crafts and campfires. Bracelets and other things. And you were a cute young lady, but Grade 5 sounds like a tough year!

Ann- I loved the resident camping!

Stew- Yes it was a tough year. I'm sure it's all part of who I am now.