When I was taking pictures of the Aphrodite Fritillary the other day, I realized that something else flew in and out of the pictures (see the second one?), 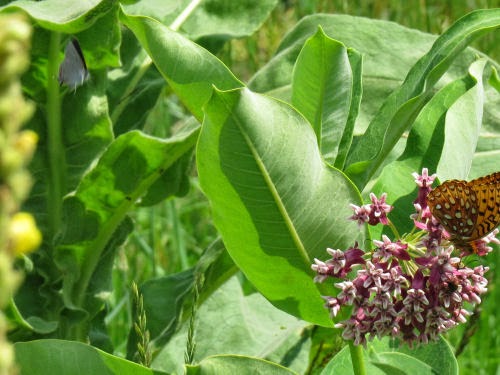 but I was concentrating on the big orange butterfly, and didn't see what it was till I got home and looked at the photos on the computer. It's a very common butterfly, but I've never gotten a good picture before, so I'm happy.

It's an Eastern Tailed Blue, Everes comyntas, or Cupido comyntas. I've showed you some terrible pictures of one before when I was trying to figure it out. In this one, you can clearly see the tails, and the large orange spots near the tails. A few years ago, you might remember that I volunteered to help with the counting of the endangered Karner Blue butterflies, and since then I've been paying more attention to little blue butterflies!

Nice capture of this little guy. I am sad to say I have never really noticed this butterfly, though I might have seen one.

Nice catch! So much beauty out there for us to enjoy if we only, as you say, get off the couch.

I've never seen one of those. how pretty