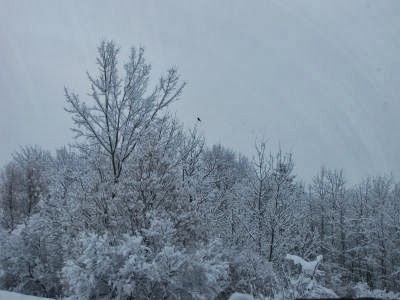 Today I'm dipping back into the photo archives a bit, but these are pictures that I like, but never had a chance to share them. The theme is black and white. I guess I'm on a color jag.

The picture above was taken on the ramp to the interstate as I was leaving for Philadelphia in February. I love the way the black crow is almost lost in the total whiteness of the snow cover. 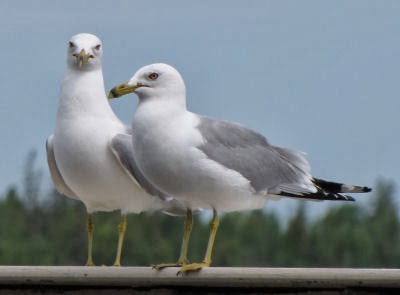 Instead of a white setting with a black bird, here are two white birds (herring gulls) having a conversation. They were perched on the railing of the waterfront walkway through St. Ignace, Michigan, which is part of the North Country Trail. I've always liked this picture, but it was no competition at the time for the cygnets in Fluffy Treats on an Urban Trail. I think the gulls were whispering about some strange hiker. 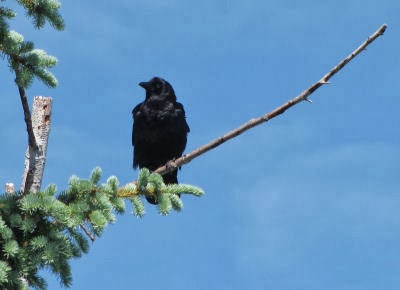 Oddly enough, just about one year later, in June 2010, Marie and I strolled the walkway again after our hikes in the Upper Peninsula. This time, we were watched by a black bird, a common crow. Although there are ravens in the UP, this bird isn't big enough to be one. But it's nice a glossy black!

No extra commentary... it's just there in black and white.

We too have many varieties of seagulls that have made their homes in land. I can remember as a girl seeing the smaller black headed gulls at a local reservoir and being excited that they had made it so far in land - but now many of these birds would not know the sea if they came across it they are well and truly established into the land lakes and water courses.

We are also experiencing larger proportions of walking birds - these are the blackbirds, the various members of the crow family and so forth. It is much harder to see many of the smaller song birds.

How times have changed - for at one time it was usual to see magpies only once or twice per week and almost impossible to see a jay and a raven! Now they are all fairly commonplace but sadly our happy little sparrows are quite sparse and the chaffinch which flew in fairly large flocks comes only occasionally to the feeding table.

Black bird and white bird, they are still a bird.

But the black one is not my favourite.

Another snow picture. Neat! I don't mind looking at them this time of year.

Love the gull photo but I think crows are much more interesting creatures :)

It is kind of nice to see a snow picture, makes me feel cool. LOL, The sea gulls are neat looking. Used to see lots of those when I lived on the coast.
Have a great day.

The snow picture was kind of nice to look at on such a hot day. I love the picture of the seagulls.

Those photos are all lovely! We enjoy watching birdies - especially big ones like those!

Polly- Thanks for stopping by. Here on the great lakes we have many gulls, but these are the most common. Lots of sparrows, but of course a few are most common.

rainfield- black is not my favorite color at all, but the large black birds are pretty impressive (and smart)

Chuck- it must have helped... it was a little cooler today.

dawn- crows are a lot smarter, that's for sure.

Marg- we have almost all boring herring gulls. Maybe I can find a better one some time.

Ann- as messy and provoking as they are, once in a while they manage to look intelligent.

Hi Beaded Tail- The big ones have a different aspect from the little guys, for sure.

Crows get such a bad rap sometimes, but I think they are incredibly fascinating and intelligent birds. Not as beautiful as ravens, they're still pretty to look at. Great pics!

Jenny- I find the ravens more interesting... maybe just because of their size, but both are too smart for their own good!