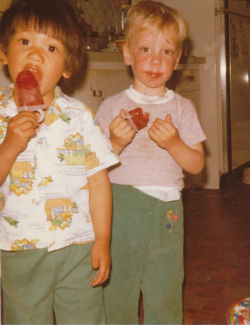 Meet David. He's the cutie on the right. The other little guy is my Steve. Yup, this was a while ago, 1978 to be exact. But this was the year I met David. His mom is my best friend and hiking buddy, Marie.

Dave, unlike Steve, really enjoyed camping and hiking. By the time he was a senior in high school, he went on a camping excursion with Marie and me. He didn't think that it was weird at all to go camping with two adult women. So the next year, when we took our first long hike on the NCT, in Pennsylvania, Dave went with us. 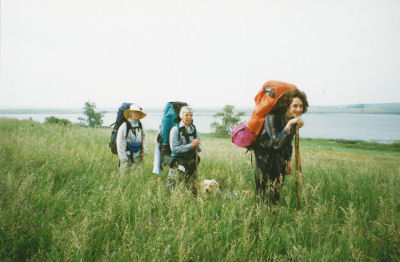 The next year, in 1995, Marie, David, Mathilda, Chips and I all went to North Dakota for our first hike at the western end of the trail. Can you feel the wind? 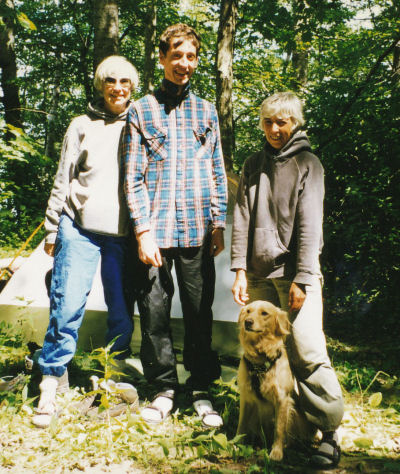 The next year, we girls went to the Adirondacks of New York. Dave needed college money, and had to pass on that trip. He was crushed, since big rocks are one of his loves. But in 1997 he joined his mom and me for a trek through the Chippewa National Forest of Minnesota and for some serious bushwhacking. By then, he had met Rachel, the girl who was to be his wife in just a few more years.

Where is he now? He's our Philadelphia connection, where we all go to stay when we go to the Flower Show. He and Rachel have two little girls, Anja and Mia, whom you have also met before. This last picture isn't very good, but I guess it's the best I can do for a current shot. This is a Monday morning on the way out the door to walk the girls to school, so everyone is bundled up. David is the tall one with the scarf (in case you can't tell- haha), Marie is on the right with Anja hugging her. Mia is in front of David. 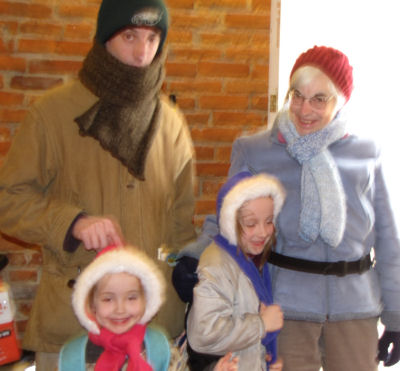 David definitely holds one of the special spots in my heart. He's a computer programmer, and customer support rep. Oh yeah, and a great dad!

Included here is an excerpt from my book, North Country Cache, which includes David:

"A solidly built man in jeans, brown work shirt, red suspenders, and an engineer's cap grins impishly from under its brim. With a slight European accent he greets us... The garden tour is first. 'Radishes came along better last year. Tomatoes are lookin' good though.' He draws David into his confidence, showing him stealthily the mechanism to control his underground irrigation system. 'Now I'll show you my winter hobby. You ladies go in the car. The young fellow can ride in my truck.' It's hard to be offended, to accuse him of being sexist. He seems to treat it all as a joke, but one that we can be in on if we want. In a world where he is confronted with the reality of three women and a just-past-boy who are planning to camp alone for two weeks, perhaps he must find a bit of security in the old ways."

From chapter 6, "Where the Trail Begins."

He became a tall young man! Great dad are rare nowadays and need to be cherished.

wow, thanks for sharing the beautiful story of David Sharkbytes, love it that he did not mind hiking with two older ladies, he must really enjoy hiking and nature.

Enjoyed the story about David. It's nice when kids grow up enjoying the same thing as their parents and don't mind hanging out with them.

So lovely to meet and read about David. Thanks for sharing your memories.

Thanks for introducing David. What a fine young man he is.

He did not mind to hike with two adult women since the hike itself must be very enjoyable.

Those are great pictures and it was great meeting David. Love the picture of the two little boys.
Hope you have a great week end.

What a neat blog; I feel a real connection with this story. The pictures really enhance it, too.

Loved meeting David. How wonderful to know a person his whole life and to have seen him develop into a great adult. And to be a hiking buddy besides! :)

betchai- he's always marched to his own drummer

Glynis- my pleasure... he's one of the keepers

rainfield- it was a GREAT week. Maybe I'll have to feature that adventure some time (I'll have to find the pictures)

Marg- they are SO being little boys in summer, aren't they? We could solve most anything with popsicles that summer! And the homemade ones were healthier

Sandra- Oh! You are the writer of that lovely poem. Welcome!

Ivy- In no time at all we'll be saying things like that about Marguerite!

What a nice young man David became. It's nice that he shares the love of hiking that you and Marie have and that, even as he grew older, he didn't mind joining his mom and his "aunt" on treks! Steve was just not interested, it seems, but, then, our kids don't always follow in our footsteps.

I'll be the also has some great memories of those past hiking trips.

Carmen- Yup, isn't is interesting that Steve doesn't really want to recreate that way at all, but David loves it.

I love stories of people like David who love to hike and be out doors and knowing that it all started when they were young is awesome!

Julia- David was such an unlikely child to be an adventurer. He's a somewhat poorly coordinated genius (seriously). But he made Eagle Scout, has great outdoor skills, and loves climbing rocks!