Some Special Plants from Loda Lake


Since we get Sundays off from the A-Z Challenge, I'll bring you some special plants from Loda Lake. I think I'm holding out some more for "W" day, too.

There is a natural diversity of plants at Loda Lake, and the Forest Service is working hard to restore some plants that were recorded in the area in historic records. The area was clear-cut around 1900-- most of Michigan was. Then homesteaders came and tried to farm, but the soil was too poor. Most of the farms failed. The land was bought by the relatively new U.S. Forest Service. Think of a forest with no trees! It was all very different from what we have now.

Loda Lake was acquired in 1939. There are remnants of a large estate and two smaller tenant farms. All the buildings have been removed, but the foundations remain. Around the two small farms, oak savannah is being restored, including prairie plants.

So, our first little treat is Hill's Thistle, Cirsium hillii. This plant is completely new to me, but with the distinctive basal rosette, I might remember it. Of course, late in the summer it will have purple tufts of blooms. It is a rare species, requiring open sandy soil. 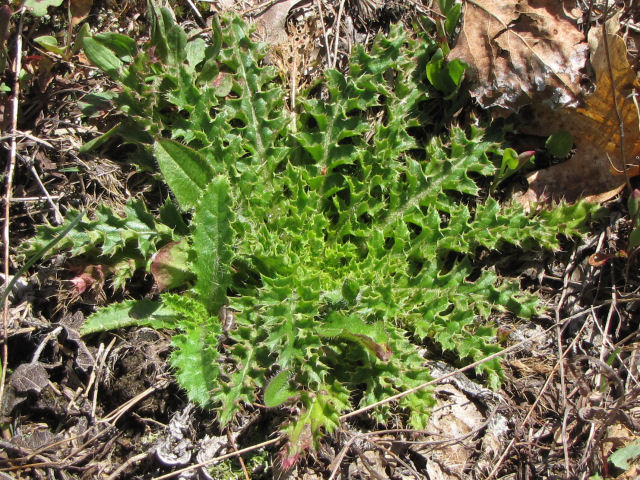 Next, here's a new fern. I didn't put this one on my photo pages, because I'm taking the botanist's word for it that it is Goldie's Wood Fern, Dryopteris goldiana. To be honest, it doesn't have some of the features noted in the field guide, so I'm just not certain. But, it's a pretty little thing. 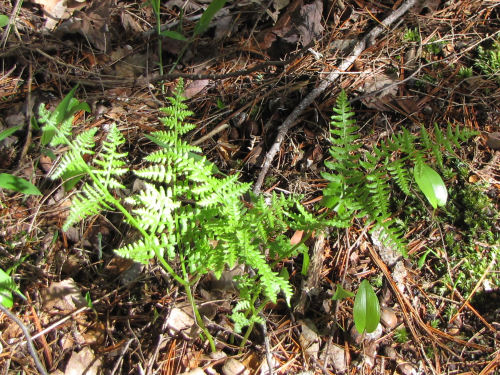 Finally, the hit of the day (with me, anyway). There is a genus of ferns called moonworts. I've showed you one of them before. None of them is common, but the most often seen is Grape Fern, because it does get larger than the rest. I've only seen them a couple of other times. Yesterday, we must have seen two dozen!

All were just beginning to unfurl. That "tongue" in the middle is the fertile frond, the one that bears spores.

If you do follow the link below, you'll notice that it's very different from that moonwort. These look more like other ferns, but they are all in the genus Botrychia. This one is Botrychia virginianum 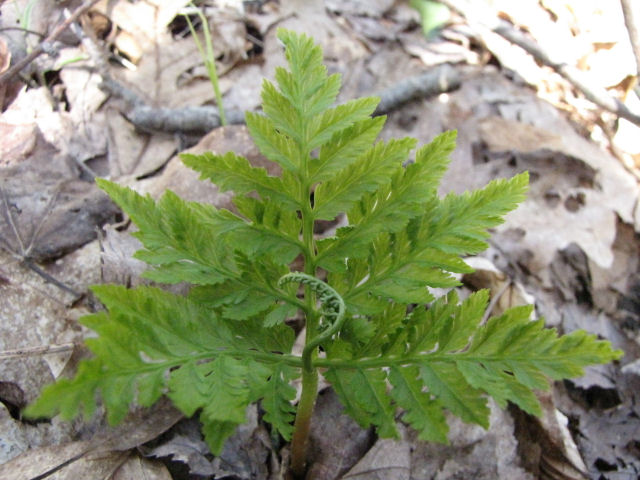 I do have pictures of this fern when it's mature, but I'll have to hunt them up and show you another day!

The first fern reminds me of the Rattlesnake ferns we have here in GA.

i love ferns--if i had a front porch, i would put up hanging fern baskets

Lovely pics and interesting post! Thanks for stopping by my blog!

The Hill's Thistle looks like what we get around here all the time. As a matter of fact my one flower bed gets overgrown with it if I'm not careful.

That first one looks like it'd be so painful to step on with bare feet! Those ferns, though, are beautiful!

I find it funny that Freud had a fear of ferns!

The photo's absolutely make your posts! Do you take them all yourself? Absolutely lovey!!

Loving the nature theme going on in your blog! It's nice of you to stop and capture the beauty of our land! --Thanks for stopping by my blog. :)

I leapt on over to vista you, too, Sharkbytes! I love that you are posting pictures of native plants as well! Good luck finishing up your A to Z Challenge.
Nutmeg

Very pretty. Who knew there were so many varieties of fern??

I love ferns and these are pretty cool!

I love the little curly part on the last picture!!