I'll tell you the moral of this story right up front. Sometimes there is just no point in dreading a job for three, yes 3, years and putting it off.

If you are a dedicated reader you MAY remember the disintegrating electrical box from the kitchen which required that I cut out a piece of the ceiling drywall so I could fasten a new box in place and then repair the hole in the ceiling too. At that time I mentioned that there was one more of those broken light boxes. Guess what. It hasn't fixed itself.

The primary kitchen light has been hanging about an inch below the ceiling, and not level, ever since then. So, today was its day.

When I got the fixture separated from the box, it turned out that the box itself was fine, but it had become detached from the "wing" that holds it to a joist.

I figured I had choices. I could take the box out, cut a hole in the ceiling and do that whole thing again, then rewire the fixture. Or, I could just do some cheap fix to hold the box in place. That fixture isn't heavy at all like the other light was. 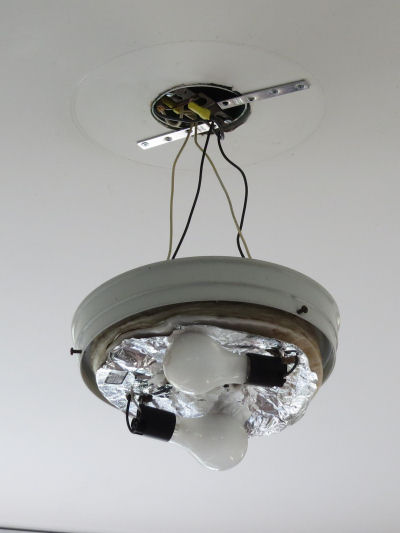 For $2.49 the dreaded job was conquered. Not bad. Notice the base of the light is now flush with the ceiling where it belongs. 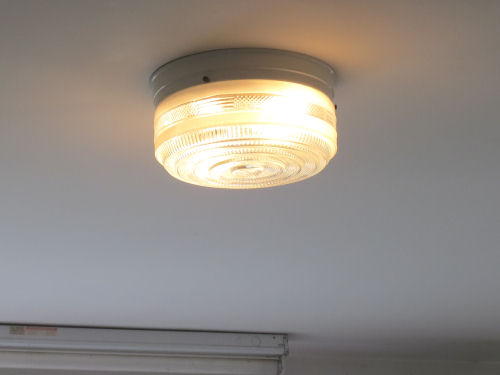 Our kitchen light is currently just a lightbulb in a cheap plastic socket.

You are simply amazing with all the things you can do yourself. I would never even attempt to rewire anything. With my luck I would electrocute myself. I am however very good at putting off jobs that I don't want to do.

Well done. Many jobs are like a leaking roof. You can't fix it in the rain. When it is not raining, it doesn't need it.

Stew- that works too, but maybe not enough light to cook by!

Chuck- yes, and maybe I got the tiny leak in the roof to FINALLY stop too