Did You Ever See?


...a lassie go this way and that way? Oh wait, that's not where I was going with this post.

Today was a project day. Lots of little repairs that have to be done around here. Mostly I forgot to take pictures, but that's OK, they are pretty boring. I'm sure you have similar stupid needs at your house.

First, I tacked up a piece of fascia cover that blew down in the windstorm last weekend. That involved getting a friend from church to help put up the ladder because, sigh... I can't handle the extension ladder alone any more. Done.

Then, I cosmetically covered a water stain in the kitchen ceiling (not related to the roof project). The cause of the stain has been long fixed, but the ceiling damage was small, but ugly and annoying. Done

Last on the list was to figure out why the light over the kitchen table was falling out of the ceiling. It was something of a mystery. Until I got the box out. 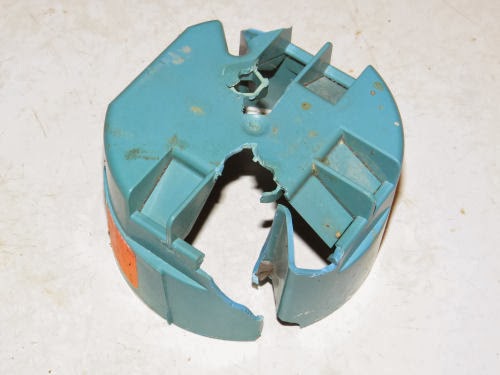 Did you ever see one of these boxes disintegrate like this? All those broken places were like that when I took the box out. It just came apart in my hand. The reason it was falling was that the screw holes had broken out larger than the screw heads. The helper people at Lowe's said they had never seen anything like it. I hope we don't have a house full of them. I know there is one more to do. So far it's not as critical as this one.

This light is heavy. And I had to have a way to take the weight off the chain to get the light detached. Voila! 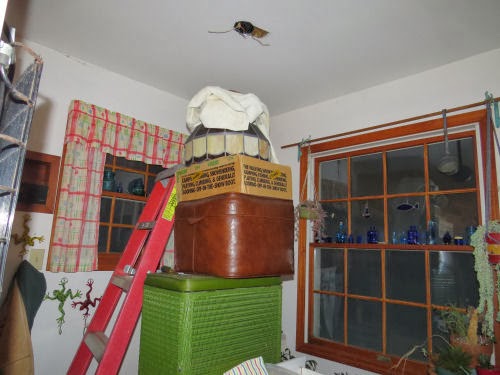 Then there is the little matter of getting the new box back in the ceiling. Well, getting it in is easy. Fastening it to the bracket is impossible to do after the ceiling drywall is in place. Hmmm. Had to cut a space for my hand beside the hole. Even then it was really difficult, but I did finally get it fastened.

But by then it was getting dark. And, um... I had to turn off the electricity to play with the wiring, right? (Let's hope I'm bright enough to do that.) So... end of story for today. I'll have to do the plaster repair and hang the light tomorrow.

I really HATE little jobs like this. So pat me on the back folks, and keep me motivated to finish this dumb light tomorrow.

(And all the mess from the colored "tiles" is still out because that isn't done either.)

you never fail to impress me with all you can do. I wouldn't have a clue as to where to even begin with something like this. It's a good thing my husband does know but getting him to do it is a whole other story

Here's a BIG ol' pat on the back for ya! I know from my own experience that these "little jobs" are always bigger than they first appear … and anyone who tackles them themselves is Aces in my book!

Good job, and best wishes with the finishing touches in the light of day!

It isn't only that you are handy, but you are creative as well.

Box damage looks like ultraviolet deterioration. Could it be cold crack? Some plastics get very brittle in cold conditions. Perhaps it was a product of weight and time.

I have a list of those little projects to get done too. Ugh. The little ones usually take the most work too. Go figure.

I'm like you, sharkey--I figure out how to fix stuff. When we were growing up, there was no money to have someone else do it. We just figured it out ourselves. I think I'm better for that.

Ann- yeah, my hubs has no clue.

Vanilla- the two clashing halves of my brain that prevent me from ever sticking with anything very long. When one side is happy the other is bored and cranky.

Chuck- yes, it got brittle, but the question really is WHY?

Lin- we could conquer the world!

It seems like all those little repairs end up being so time consumming.