Back to Midland to Mackinac - Day 3

It was a pretty amazing day, but I'm beat. I hiked 14 miles, but only 5 of them were actually on the Midland to Mackinac Trail. Those miles were so difficult that I chose to take a longer road walk back to my car in both the morning and afternoon. In both cases, I walked the longer road miles faster than the trail miles.

The temperature was perfect- in the 70s, and the only wildlife I didn't like was the deer flies. But I kept my hair covered with a bandana and foiled their dive bombling.

I didn't get pictures of a lot of things, but I got a nice variety. Here's a Red-spotted Purple Admiral. I also saw Fritillaries, and I another orange one that I couldn't ID on the fly (literally). 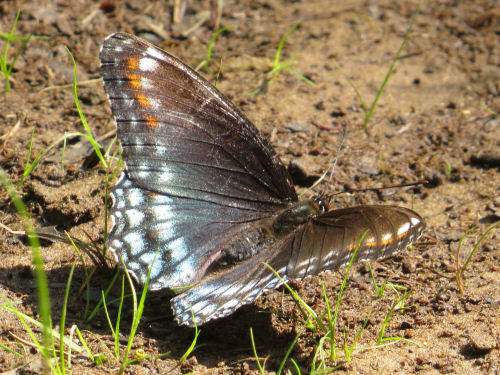 I guess the next spotting was a Ruffed Grouse. It did not fly up, but did the pretend broken wing thing, so I suspected a nest nearby. The baby had fledged! I use the singular because I only saw one, but it flew right up beside mom. Mom landed and made a strange mewing sound. I've never heard that from a grouse before.

After that, a Woodcock flushed up right in front of me!

I loved the tamarack with the purple cones just forming. 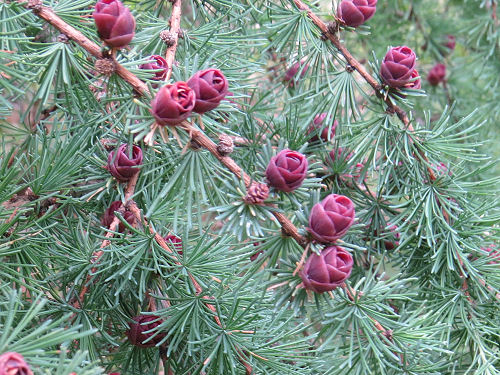 This section of trail was a piece that was totally flooded two years ago, so I hadn't seen any of it. This was from Estey Road north to Guernsey Creek Road. I made it through, but it took me 2.5 hours to hike 2.8 miles. But it was wild and quiet and adventurous. I added quite a bit of blue flagging tape to help other hikers find their way with a little less trouble. Someone had been through recently enough to leave broken ferns. That helped me a few times. 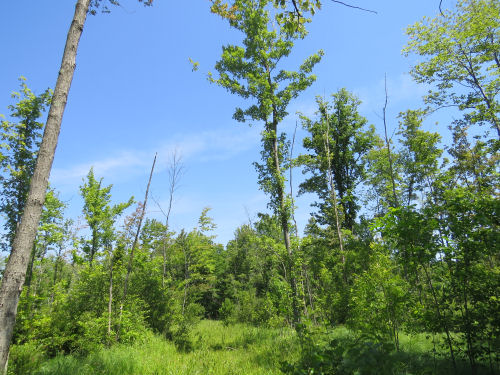 Don't think that the road walks to return were so bad. Most were quite pleasant. This is Eastman Road. 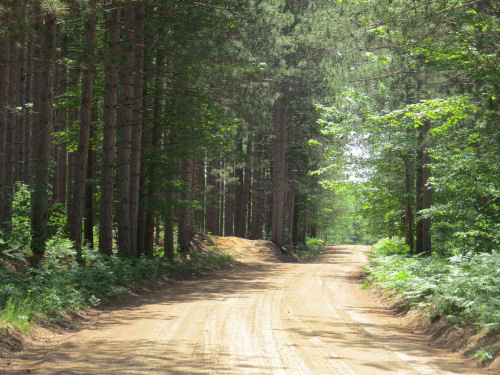 After that, I decided to go back to the southern end of the piece I did on Monday. It seriously needed some additional flagging tape. I only found the trail on Monday because I'd spent a ton of time two years ago exploring all the places the trail was not. Perhaps foolishly, I decided to hike in from the next road south to see that section again. Hoo boy. It skirts a big wetland with treacherous footing, and then I had to hunt for blazes a few times. One benefit of that was finding this huge Black Oak. There are quite a few big ones in this section. The big oak also served as a landmark as I hunted for a blaze. 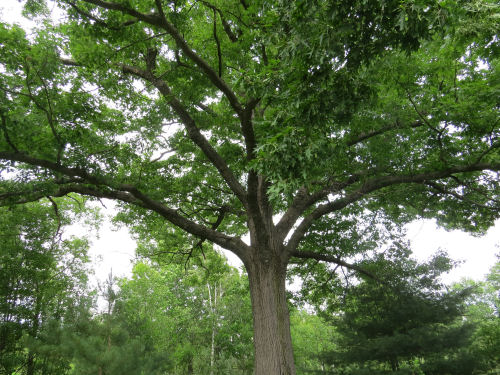 I went in as far as that infamous clearing and hung long streamers of blue tape that can be seen from each exit of the trail. Then I contemplated if I wanted to hike the two trail miles back- They had taken me over an hour to hike, and I'd gotten pretty wet getting around the wetland. I decided to do the 3 mile road walk back, which was also a bit of an adventure. The first mile was on a really old woods road. I briefly thought it was going to disappear into a huge marsh, but it did curve around that. Then it came out to the "real" road on private property. So, it's probably no longer a public road. Fortunately, I didn't get yelled at. After that it was a piece of cake to get to the car.

Found this cute little Northern Water Snake in the middle of the road. Someone needs to explain to him that he likes water. Anyway, I scooted him to the edge so that he might live long enough to find some water. 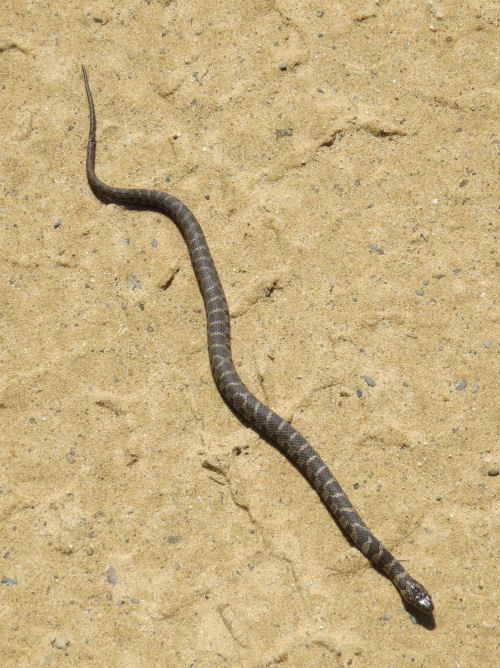 This lovely wetland with Bullhead Lilies didn't slow me down. What's a little unusual about this is that the water must have dropped after the lily pads grew. The leaves are standing quite upright instead of floating on the surface. 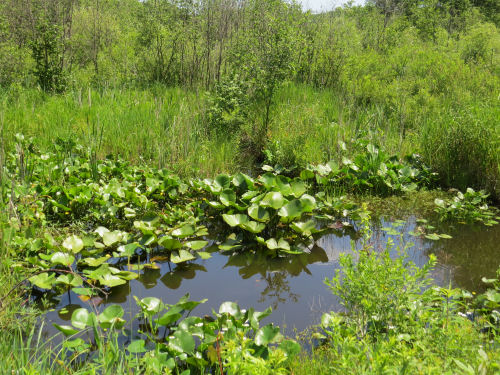 I did get held up there for a few minutes taking a picture of the Twelve-Spot Skimmer dragonfly. 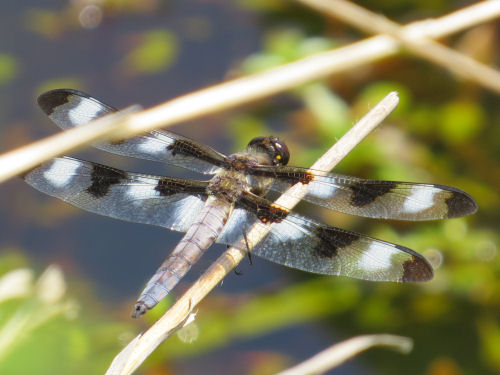 I think I earned my dinner today! I made a new skillet meal that will last me a couple of days. 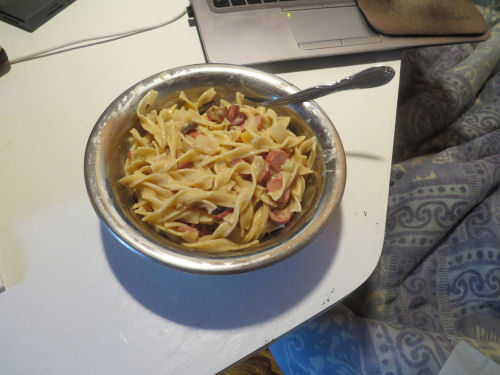 Anyway, I did 9 road miles and 5 trail miles. Tomorrow will be a little less ambitious.

That is some day you had. The purple cones look like rose buds.

Ann- I thought they did too!

Charlee: "Ahh! That butterfly and dragonfly are more the size we like."
Chaplin: "Yes, not so big and scary."
Lulu: "Are you sure? Maybe they're enormous and you just can't tell from the pictures."
Charlee: "Stop trying to spoil our enjoyment of the insects, Lulu!"