This is a great year for finding various kinds of bedstraws.

Yesterday, at the park, I found Small Bedstraw, Galium trifidum. This is also a nice find. Not as amazing as the Indian Cucumber Root, but the Coefficient of Conservatism is 6, which is not shabby- definitely not a weed. 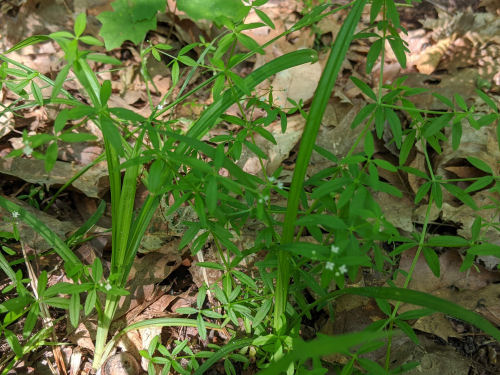 The leaves, and the whole plants are, well... small. I need to go back and verify something that I can't quite tell from my pictures. If the stalks grow in threes from the axils (trifidum), then I'll be sure. Like all the other bedstraws, it has small white flowers with four petals. However, the density of the flower clusters can also help with the ID. 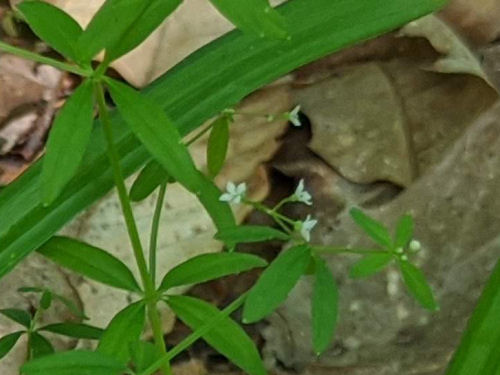 The other one I haven't shown you yet is probably the one that a few people said they recognized. This is Cleavers, or Goosegrass. It grows over other plants and forms mats of annoying stems. It's very rough, almost prickly. Galium aparine. By contrast, its C of C is 0. The only positive thing about that is that it has a number. That means it's native rather than alien. But it hasn't much value. What does that mean? It's not fussy. It will grow almost anywhere under many kinds of conditions. It doesn't require much of any special environment. It's equally happy in dry disturbed soil as it is in damp forests. It's not going to become threatened. 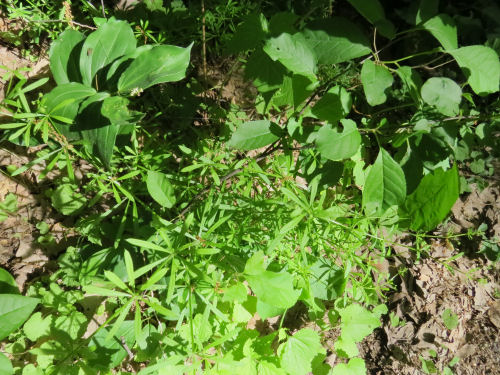 There are generally 7-8 leaves in each whorl, and the plant is coarse. Even the seed pods are rough. The picture isn't focused perfectly, but you can see the little bristly balls. 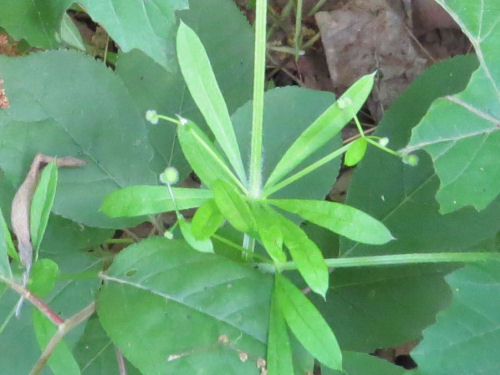 That's five of the 21 species known to grow in Michigan. Not bad. A few of them are outliers where one exemplar was found in one county.

In other news: Today was kind of a bummer. I wanted to join a group with my kayak, but the fittings on the crossbars for my rack don't fit on this car. So... no kayak trip. I did get out and mow and rake while it was still relatively cool. After that, I mostly worked on the data book and did some writing. And I have a meeting next.

Posted by Sharkbytes at 7:31 PM