Parent of the Amazing Baby 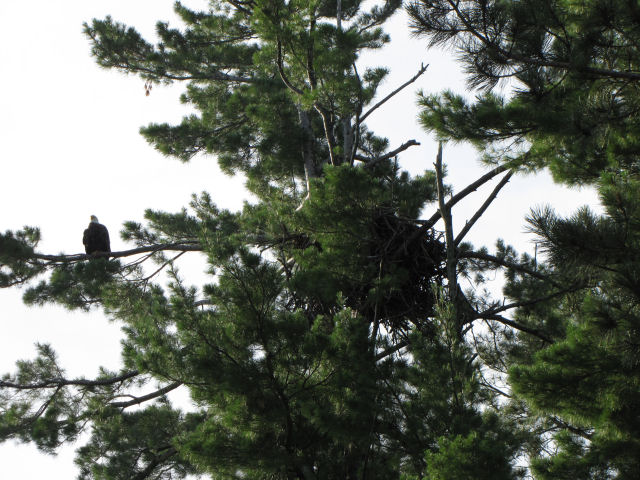 Some of you guessed! Here's one more hint before we zoom in closer. This is one of the parents on a branch to the left of the nest. The nest is just about in the middle of the picture. 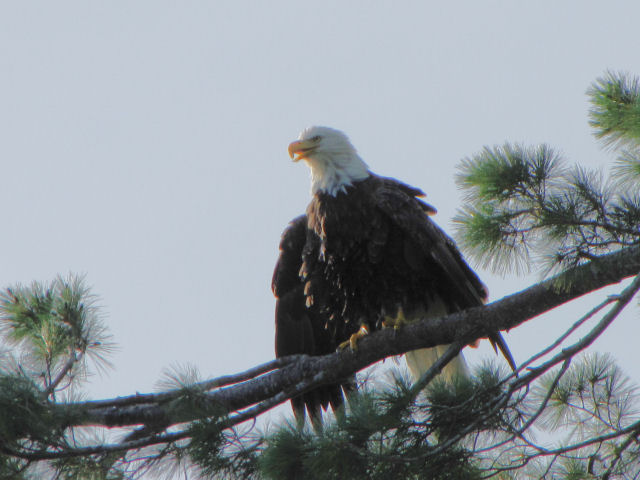 Yup, it's an American bald eagle! There is no way to tell males from females by their appearance, so I can't tell you if this is mom or dad. The females tend to be quite a lot larger than males, but we never saw both adults together. 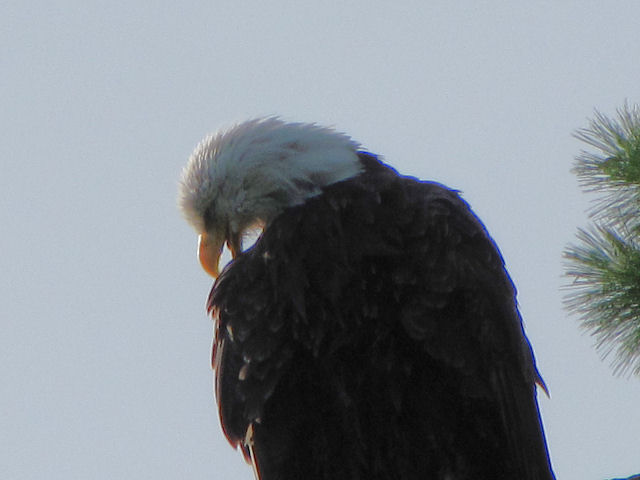 Here is a closer view. I know that these are "just" typical eagle pictures. But of course what makes them special to me is that I took them, and not in a zoo or nature preserve. The Trouts, whose home we were at, live right on a small lake. The eagles chose to nest right beside their garage, in the midst of an area of cottages. While we tend to think of these birds as needing lots of privacy, this pair was totally comfortable with the human population.

Finally, this picture is at the edge of an island in the lake, just across from the Trout's home. It's not quite in focus, but I kept it because it is at least different from the others... how often does one see an eagle standing on the ground? It apparently felt pretty safe on the island, because we saw it several times, gliding in low over the water, and then landing in the shallows.

At any rate, this was an awesome experience! Tomorrow... Trail club outing at Pentwater Pathway

Shark, that is REALLY exciting. I have never seen a bald eagle and we do have them in CA. They are so incredible!

They're not just 'typical' eagle pictures. I'd love the opportunity to see them this up close in the wild :-) Brilliant shots.

Wonderful photos, some folk (like me) would love to see them in natural surroundings as you have, they are obviously happy with the area.

I live at the foot of the Catskills and bald eagles are plentiful here. No matter how many times I observe them in the wild, I'm still amazed by them!

That's a great photo. Once when I was on the Lake fishing , in a row boat, with my father-in-law and hubby. An eagle came right down and snatched a fish from the water. My Father-in-law had never seen one in the wild before and was so please to have that opportunity.

That's just wonderful pictures of the eagle! I can't believe I wrote down hawk when in my mind I thought of eagle :-(

love the photos...can't believe I actually guessed correctly. Do not agree that they are "just" photos of eagles....

The photos are amazing, as was your opportunity to see them (the eagles). Thanks so much for sharing!

From the beak, I was sure it was a baby eagle. I don't know them well enough to distinguish between a juvenile bald eagle and a golden eagle. I have seen both here near my home, but they are only passing through. The golden was the most of impressive -- a really huge bird.

That's a really rare close up shoot of Eagle Sharkie! So cool!

Shark, these are awesome shots. I have seen one at our local zoo in San Francisco and they definitely have a presence. Your details in these are just amazing.

Simply awesome. How exciting that must have been to see them.

oh, wow, that is so wonderful! I wish to see a bald American eagle in its natural habitat too, not in the zoo. love your shots, Sharkbytes.

How thrilling and I'd be ecstatic to see a beautiful bird like that anywhere near our place here. He/she is magnificent, no wonder it's the national bird.

ya, i would love to see them in their natural habitat rather than in the zoo.

Carmen- You might see one sometime! They are becoming more common again.

John- Well, hey... when they sit and pose for a shutterbug party, we all came home with good pix.

Hi Duxbury- Yes, they really liked it there- nice lake for fishing and a tall tree from which to view it all.

Jo- The Catskills are great! You are near the east end of the Finger Lakes Trail. Thanks for coming by!

Icy- No big deal. You can see how far off my mind can be sometimes in today's post.

Loretta- I didn't realize you were guessing! Worked on your afghan this afternoon.

Judy- Welcome, fellow Michigander. It was super indeed. I almost forgot to share, but then remembered I had put them in their own file.

Hi Chuck- I spent the summer of 1993 on a pond with a golden eagle. It was awesome, and I got to see it up close quite a bit. But I didn't have a good camera then.

Vanilla- Thanks... but not so rare, except for me. The eagle is a popular subject for photographers.

Dennis- Are we big enough that those birds won't want us for dinner? I wasn't with mom when she took these. I think it's a little scary. Maggie

Hi Jo- It would take a really callous person to not be impressed by these guys.

Ann- We all spent a lot of time hanging out watching them whenever they were out of the nest.

betchai- There are quite a few in the midwest now. I know where there are 2 nests within 50 miles of my house, and I see one fairly often, but having this chance where they practically posed for us was very unusual.

Karen- the word majestic says it all, doesn't it.

wenn- I agree. Although I wouldn't pass up the chances I've had to see animals in zoos, it's always so much more perfect in the wild.

great i hope that people have to take care of our wilds. so that our future generation will benefits the beauty of them.

Awesome!! Ratty had it! Good for Ratty. I've got to look at eagles more often. ;)

I love the way bald eagles look. It has to be an amazing feeling to get pictures of one. I think I like that last picture the most because I've never seen a bald eagle on the ground.