More About the Iclandic Sheep


We get a day off from the alphabet on Sundays, so I'm going to show you more about the Icelandic Sheep.

As I said before, I had no idea sheep were so interesting and engaging. When Betsy (the owner) and I first went to the barnyard we were greeting immediately by Geri. She wasn't bred this year, but she's always the most friendly anyway, Betsy says. She came right over to be petted and to check for treats. 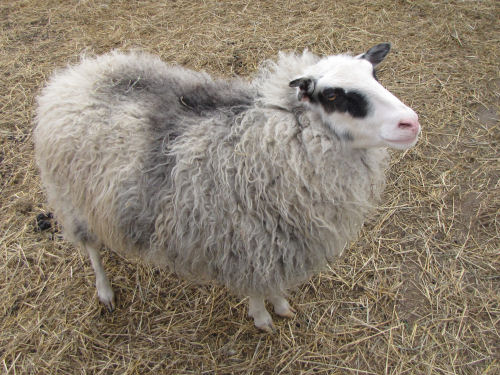 Some of the other girls held back until they decided I was a friend. 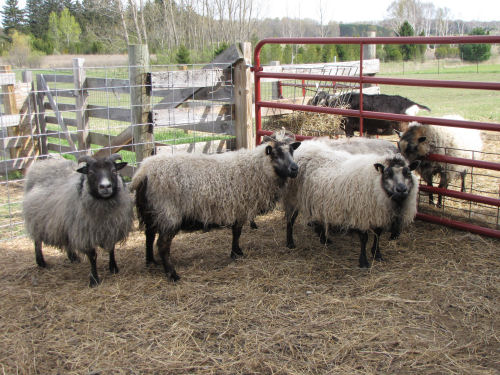 The first thing I noticed is that they all look different from each other. Even the two with the same coloring have different shapes to their faces. They are mother and daughter. Then Betsy said, "They have different voices, too." Since I'm not always great with audio, I thought I wouldn't be able to distinguish them, but she was not kidding! Sage's voice was terrible. She sounds like she's throwing up when she baaas. Geri was high pitched and exuberant. I can't really describe the others, but they were indeed distinctive. I'm sure I could name them all by their sounds if I spent a few hours there.

They know their names and come when called. Gives me new insight into "My sheep know my voice" and "He calls his own sheep by name." John 10:2-4

Here are a couple more close-ups. I think this one is named Cinnamon. 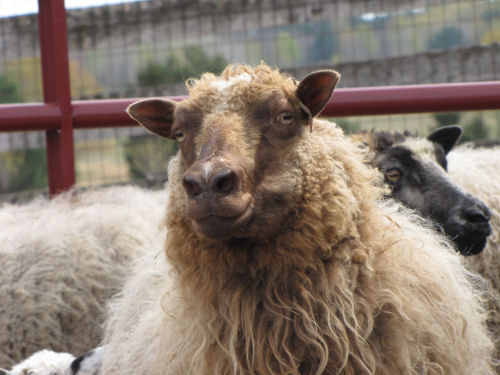 Next we have Tansy, just a "plain" white sheep, but even if she had more colors she has unique features. Definitely not plain vanilla. 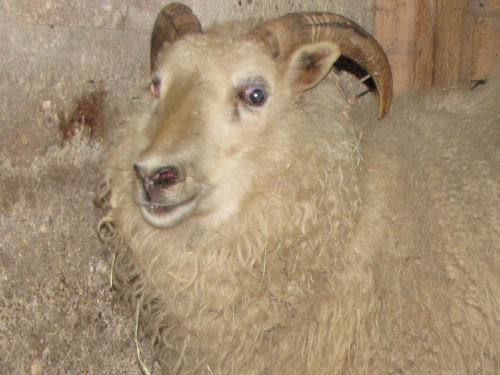 Betsy says they are very hardy, because, duh... they were bred to survive in Iceland. They like to be out in the snow. Also, because the breed adapted to Iceland's mineral makeup they need selenium in their diet. There isn't enough in the soil here, so they have to be given a supplement!

They are sheared twice a year. Betsy has washed and carded some wool, and hopes to learn to spin.

The main danger to them around here is coyotes, so they all go in the barn at night to stay safe.

You already saw Snickers, one of the day-old lambs, but I'm bringing him on again so you can see his black tongue. 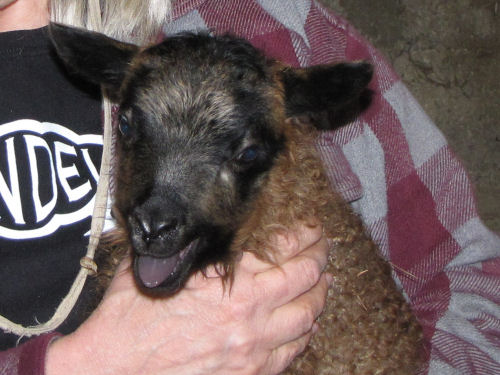 Finally, who was the daddy of the fine lambs? Well, part of the responsibility was Arthur's! But he doesn't get to stay with the ladies most of the time. 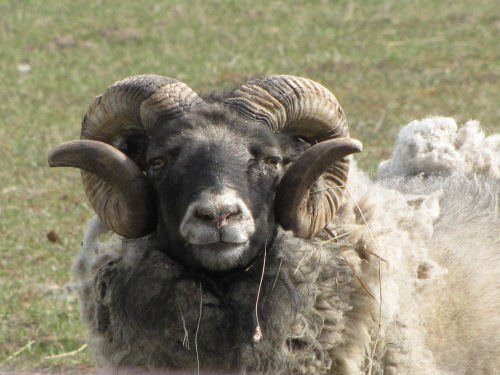 Betsy writes wonderful poems about farm life. You can find some in the Chapbook called "Three True Voices," available at Ludington Writers

Oh, they are lovely! I really like Arthur--he is a fine ram indeed.

I find it interesting that they all look so individual--sheep aren't typically like that, are they??

Maggie looks gorgeous. I especially love the pic of her sleeping, bless her. Lovely to meet you on this A-Z.

Great post and blog. I didn't know anything about Icelandic sheep, but I've been to Iceland several times, and it is a marvelous country. Absolutely loved it.

Thanks for sharing, and I'm following now...

I enjoyed reading about your lambs. Such great pictures!

I thought they were goats wen first glancing at them. They are super cool critters!

I loved all the pics!

Lovely discussion and great pictures of those Icelandic sheep. I really enjoyed reading about this excursion. Thanks for posting an extra blog (I took Sunday OFF!), and for visiting my historical theme,19th Century Tasmania!

oh they are wonderful. Arthur is quite the handsome one and of course Snicers is adorable.

Love the sheep. Thanks for posting.

Thanks for stopping by my blog.

wow. they are beautiful. i especially love the shot of the ram. btw the children's section is by far my most favorite part of the library. :)

Never heard of this breed of sheep before. Great pics and very interesting information. Enjoyed immensely.

I really enjoyed this article and the fine pictures. We had a sheep experience of our own last week when we met a lamb who lived in the house!
(Not my bag of wool, but it was a fun experience to meet the critter.)

Brilliant. Love them. The lamb looks like it's laughing.