N is for News from Dead Mule Swamp


I have to do it! Sorry to blast everyone with marketing on this blog, but self-published authors have to seriously toot their own horns. Books don't sell themselves. So...

In the past couple of years, I've begun writing a lot more fiction. The first mystery in the cozy Anastasia Raven series is News from Dead Mule Swamp. It's been out for six months, and is getting great reviews (which makes me happy and motivated to write more, of course). 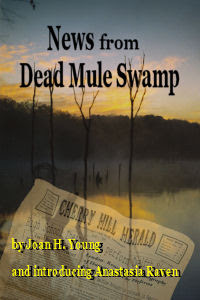 NEWS FROM DEAD MULE SWAMP
Anastasia Raven is running from the pain of a failed marriage, and hopes to hide from the world in an old farmhouse she has purchased at the edge of Dead Mule Swamp. When a hundred-year-old newspaper she finds inside a wall is stolen by Cliff Sorenson, and then Cliff disappears, Ana is convinced that the paper holds the key to the mystery. But what old news could be important enough to put Cliff in danger?

Only 99 cents at Smashwords or Amazon

Now, I have some other news about Dead Mule Swamp books. I'm officially announcing that the second full book in the series, Paddy Plays in Dead Mule Swamp will be available on June 1, anticipated price $2.99. 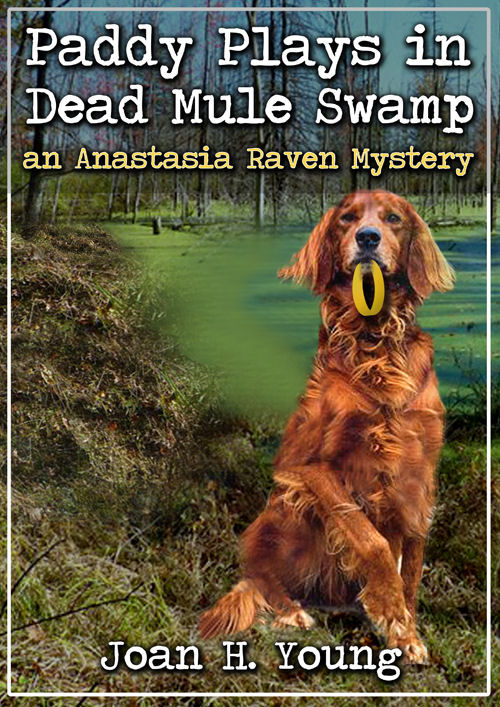 PADDY PLAYS IN DEAD MULE SWAMP
When Anastasia Raven agrees to keep Paddy, her cousin's Irish Setter for the summer, she didn't understand the mischievous nature of a large puppy. As a volunteer with Family Friends, she meets Corliss Leonard, and his granddaughters Star and Sunny, whose mother disappeared seven years ago. The girls fall in love with Paddy, but can the dog solve their problems?

And finally, I have one more story to announce. Unfortunately, I couldn't get the cover completed by tonight, but I'll add it in when it's done. This is a short story called "The Hollow Tree at Dead Mule Swamp." Chronologically, it fits between News and Paddy. This story will be a free download, so that anyone can get to know Ana and her friends in and around Cherry Hill.

THE HOLLOW TREE AT DEAD MULE SWAMP
Anastasia Raven finds a secret hidden in a hollow tree near Dead Mule Swamp. She thinks she's seeing things, as the discovery appears to have come straight from a Nancy Drew story. With some simple sleuthing, Ana catches Jimmie Mosher, whose grandfather used to own the house she has recently purchased, hiding money in the tree. But what else does Jimmie have to hide?

"The Hollow Tree at Dead Mule Swamp" should be available in about a week. Stay tuned!

I've had questions about cover designs- I designed News (and am going to add a border to make it similar to Paddy). The Paddy cover was designed by Farah Evers, whom I highly recommend!

You can "Like" Anastasia Raven Mysteries. I give away free copies each time another 100 people are added.

you are moving right along with this series. there's certainly nothing wrong with promoting your books on the blog, who better to give you free advertising that yourself :)

Hope your book is going to be the bestseller.

I love your latest cover. Wish you every success for your new book and continued sales for the first in the series.

Purchased the book at Amazon and look forward to reading it this weekend!

WOW! You have been busy! Congrats on all the books and thanks for stopping by my blog!

I agree with Libby....you have been on busy bee. So you are going to try to stop by everyone's site..Good Luck.

I would like to thank you for stopping by mine..:)

Your books sound great. AND you design the covers? Wow!

I'm glad to be introduced to Dead Mule Swamp! Thanks for stopping by my blog. Good luck visiting all!

I think it's very smart to slip a book promo post into the A to Z Challenge. And congrats for getting your books out there for the world to sample. Are you doing your own book covers?

Awwww - I love sheep! And I love Iceland (but not in the winter).
Good luck with the A-Z - and glad you liked my posts.

Hello there. Thanks for your dedication in trying to visit all the A-Zers. I'm from RomanticFridayWriters. You've a lovely blog and nothing wrong with promoting your book. Looks great.

Congrats on your book. Why not slip it in and promote the thing? :-)

your book sounds like an interesting read - congratulations! i also love the beautiful moments you find in your day - like sheep!

Love the idea of the interim story Joan. I'll definitely be getting that and then buying book 2 as I enjoyed the first one so much.

I think it's great that you're promoting your books. I for one had never heard of them before and they sound good. I love the dog on the second cover.

Good luck with all the books.

Your books sound great and there is a huge audience for them...they just need to know about them!