The county is closed. Literally. Pulled in the snowplows and everyone is told to "shelter in place." Record cold predicted for tonight. Many churches already cancelled for tomorrow. Thankfully, the wind has died down a bit. Some of the gusts today have been rather exciting.

My brain is in zombieland. It's been one of those Saturdays that I can't seem to ever wake up. Took no pictures. Hardly moved all day.

So let's forget about that and get some lichen basics started. Not that I know this stuff any better than you. I'm reading the book and sharing!

Three forms: Crustose, Foliose, Fruticose. Just like what the words mean- kinds that looks crusty, leafy, or with fruiting bodies.

The picture from a few days ago shows crustose growing on the bark in the background with the larger one foliose. In the middle is a crustose lichen on rusting metal. The pixie cups-third picture- are an example of fruticose. 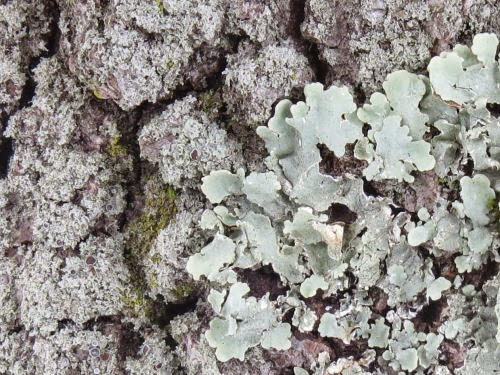 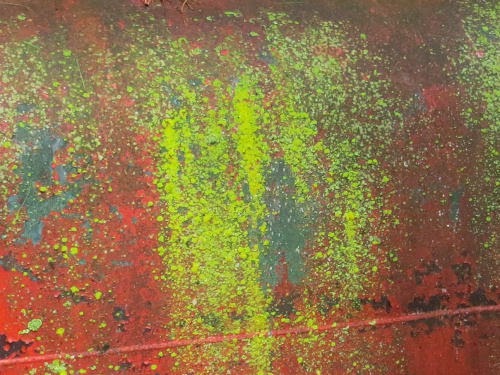 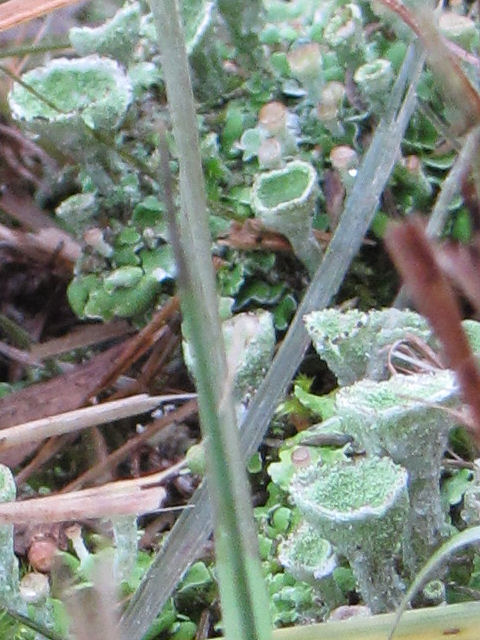 Three substrates: Soil, Rock (or engineered rock, like gravestones or buildings or rusting metal), Trees (dead or alive). I don't think that needs much explanation. It basically grows on three things. Paying attention to where it was growing will help with the identification, because different rocks and trees will have different chemistry. Thus determining which species will grow.

Tree, metal and soil shown above. Here's another one on soil, the common reindeer moss (which is a lichen). 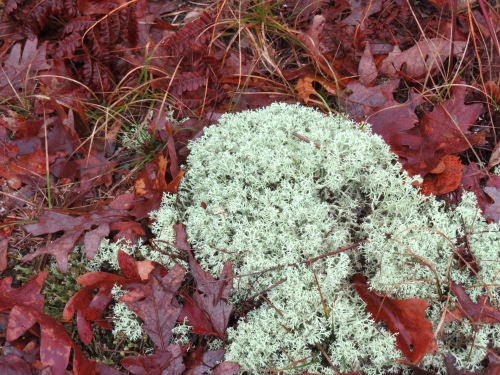 Two parts: The microbiont and the photobiont. These aren't as hard as they look. Bio= life. Lichens are by definition a fungus and an algae working together. Only the algae can photosynthsize (make something out of light), so the algae is the photobiont. The other part, the fungus, is the microbiont. Both are changed in appearance by the symbiosis, so that identification of the particular algae and fungus species is nearly impossible. Now that life forms have been recategorized, the photobiont may technically be either an alage or a cyanobacteria (which used to be considered an algae).

The relationship changes the character of the photobiont so much that fewer than 5% of lichen photobionts have been identified with certainly.

But one nice thing is that lichens can be studied in winter, so there's a pretty cool (haha) reason to learn more.

Lichens love the north. Over 600 species can be found in northern Michigan and Minnesota. That grades downward to about 100 species in southeast Michigan. That should keep me busy.

That actually helped me a little bit about lichens. I had no idea you could find them in winter. I've been looking at blog pictures of them for years wondering how to find them without having a clue, and now I know a little bit more.

I am trying to take all this in and I love the pixie cups.

Lots to learn in the lichen lessons. I know that I've seen plenty of it around here but most likely never gave any of it much thought.
We've got that cold weather here too. Right now it's -5 with a wind chill of -20

I have a little terrarium and there is some lichen in there--I can identify it from your photos!