I'm counting these as one day of work. Like everything else though, they have taken FOR-ever.

OK, the first one was easy once the paint was cured. This is a stick-on rain gutter strip. I think it definitely helps deflect the water from gushing over the top lip of the door. I don't have new door gaskets yet. For this summer, I'll just stick another piece of a pool noodle in there, but the gutter has definitely helped. I don't think water has been running down the inside of the door when it rains, and there isn't a piece of pool noodle in there right now. The adhesive seems to be holding. I had my doubts, but it's been on for about 3 weeks and doesn't seem to be pulling away. 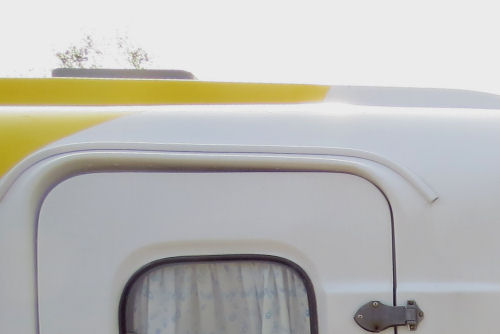 This is a little job that I wanted to do before we took our trip last summer, but I just ran out of time. I'm using a good-quality power strip with a circuit breaker for the electric box. It spent all last year just kicking around on the floor. Not good. Now it is mounted on the wall. That meant I had to fiberglass wood blocks to the wall to screw into. I have no clue what the finished wall surface there will ultimately be, but at least the box is off the floor, and the finished surface doesn't matter. 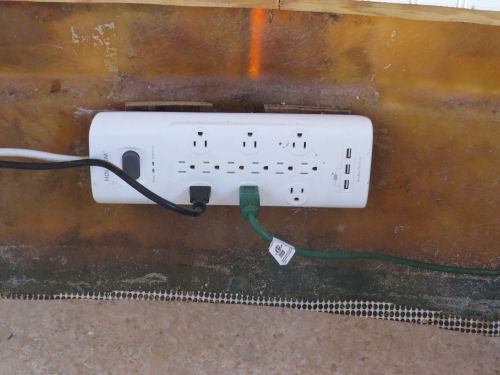 And the last project, also surprisingly difficult for 8 screws. 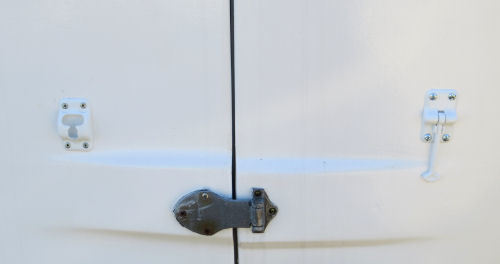 At first we were using a bungee cord to hold the door open. I hooked one end around the door lock pushbutton, and one end to the propane tank. Not good. It put too much pressure on the button. Then I got rid of the propane tank and there was nothing to bungee to that the hook would fit on.

Then we found a nylon strap with a hook on one end. That hook was large enough to go around the door handle. Better than the push button, but I still didn't like putting sideways pressure on the door latch.

With both of these fixes, the rubber window gasket could bang on the trailer wall, and every time it does, it leaves a black mark. Now that I have new paint that especially was not making me happy.

So, I bought this little doo-dad two years ago, but couldn't mount it until the door was rehung and the painting done. Check and check.

For the trailer wall side, I had to mount another piece of wood on the inside, then bolt that half on. The door is trickier. It's hollow and you don't just take it apart. Seemed like there were two options: rivets or riv-nuts. I think the rivnuts would be the better solution, but they take a tool I don't have, and you can't just buy 4 of the nuts at a time. Basically, those allow you to mount a tube with inside threads in a hollow wall. Think of a hollow rivet with screw threads inside. Then you can bolt into them. I settled for rivets. I thought the pressure needed to pop the rivets might be enough to damage the plastic of the hold-back, but it all went OK. I will need to coat those heads with something so they don't start dripping rust down the wall.

This is what it looks like deployed- holds the door open, but away from the wall so the gasket can't bang. 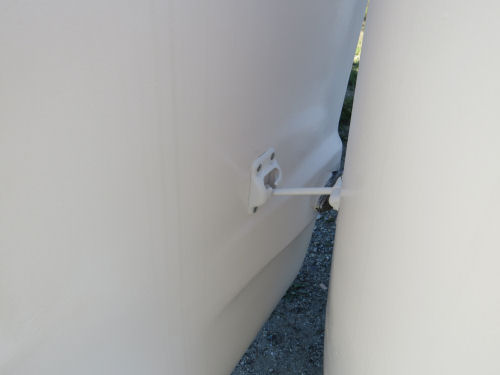 I can not believe how much time it took to do those three things. Actually the stick-on gutter was easy. The other two took forever- mostly because of needing to fiberglass wood blocks to the walls. That isn't necessariy hard, but it takes three steps for each block with drying time between each step. I have 3 large clamps, so I can do one step on three blocks at a time. Story of fixing this trailer.

In other news: I edited this morning, and spent the rest of the day on the trailer. Want to do one more thing yet tonight. I think I have figured out how to solve one major problem though, so that is good. Hoping that tomorrow is the twin of today with lots of accomplishement.

That rain gutter is a pretty smart idea.

Ann- I think so! And it didn't cost TOO much.