I tried two more poured "tiles" today, but didn't learn very much that was new. The results don't look much different from the first one I did yesterday. 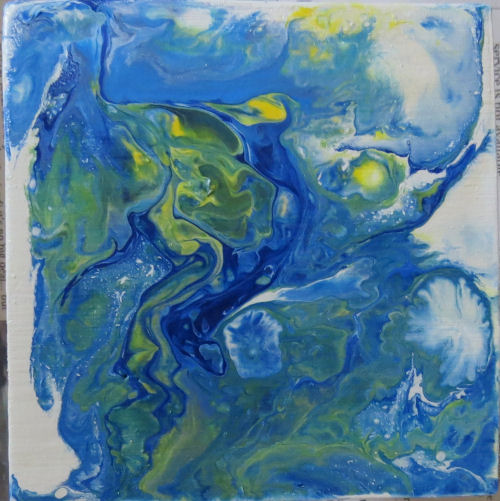 I tried the "pearl" acrylic paint, but the truth is that it doesn't really look any different from the white. Don't need to bother with that.

On this one, I tried dropping the oil on the top of the paint instead of mixing it in. It looked fantastic for the first few seconds after I did it, but then everything just blended as if it had never happened.

Well, OK, I did learn that there is so much friction on the wood that it helps to lay down a coat of wet paint on the surface just before you start pouring- it makes the poured paint move better. Otherwise, it gets "hung up" in spots and you have to touch them with a craft stick or something to get them to fill in. 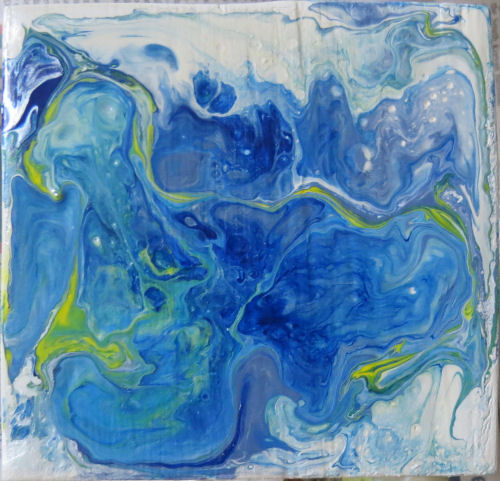 So, I guess I learned a couple of things, and these two tiles are a nice match with the first of my rectangular blocks from yesterday. Still, it sort of feels like wasted time.

In other news: I wrote a chapter this morning, and edited a little. The afternoon was spent on the trailer. In addition to these tiles, I worked a little bit on two other trailer projects, but not enough progress was made on anything to show you yet. I have all three projects done to a point where they are waiting for something. I know... just keep chipping away and eventually progress will be visible. It was really humid, but a little breeze came up, so I kept plugging away. And I got stung by a bee. I have a meeting tonight.

Posted by Sharkbytes at 6:41 PM

Love the look of these.

Thanks, Ann- I like them too, as artsy, but they are not the look I'm going for on this project. But, I'm pretty sure I know how I got that second look from yesterday.