The interior electric service is all wired as far as it's going to get for this trip. It's actually pretty much done, except for one tweak later. I'm counting it as one day of work. I think that would be a reasonable amount of time after I finally got all the pieces collected and the wood attached to the ceiling.

The big news is that the permanent 120V overhead light is in place. I've had this a long time, but needed to mount another piece of wood to the ceiling for the switch box. I thought a LOT about where to put the switch. I realize that "by the door" is the traditional answer. But mounting the box in that location was going to be a nightmare. Putting it in the ceiling beside the light makes a lot of sense and it's only one step from the door. It's not like we "come home" after dark very often.

Again, I don't yet know what the surface covering behind all that will be, but whatever it is will be thin and flexible just to cover the insulation that isn't there yet. Worst case... I have to move the box a little bit. The light is on a bracket, so it will easily adjust. 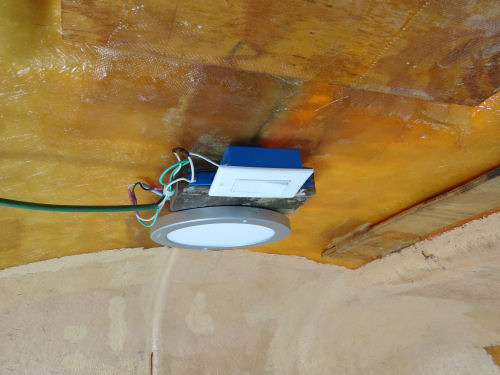 I wanted to see how bright it was in full nighttime. I woke up at 4:30 (did get back to sleep after a while), but while I was lying there, I realized it was a perfect time to find out. Here you go. No flash. Looks just like daylight except for the black windows. This is a winner! We've been using a clamp-on workshop light. This is a vast improvement in the quality of light itself, and the elimination of one more loose dangling cord. This light is making me inordinately happy. LED of course. 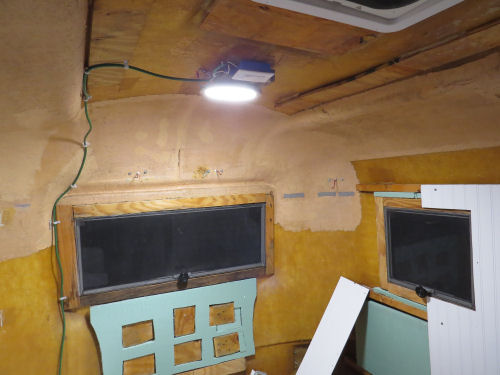 As far as the outlets go, two of them were installed last year- see link below. I just had the two kitchen outlets to add. This one was easy. It's probably in its permanent location, but even if it's not, it won't be difficult to move. I finally found a construction adhesive that sticks to the interior rough fiberglass. So I just glued the wood to the walls. If we like the outlet in this location, I can add fiberglass later. If we want it moved a bit, I can just buzz the brace off the wall. 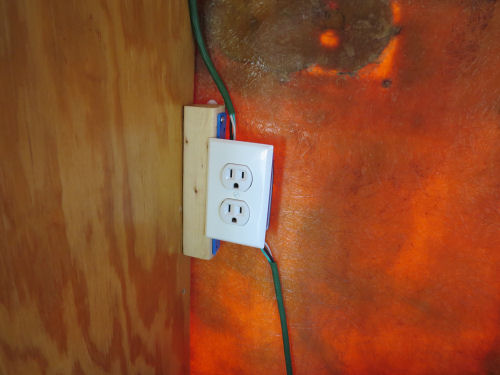 The adhesive that works is Loc-Tite. I bought the least strong/cheapest the other day to try it out. (Liquid Nails doesn't stick worth beans, and neither did something else that I forget right now. I haven't found any tape that will stick to it- even to hold something momentarily. The auto adhesive sticks but it's black and a total mess to work with and expensive) Anyway, today I bought a tube of the best quality Loc-Tite because it's making everything easier already. Maybe the good stuff will hold wood blocks to the wall well enough that I won't need to fiberglass unless they are going to have a lot of sheer stress. 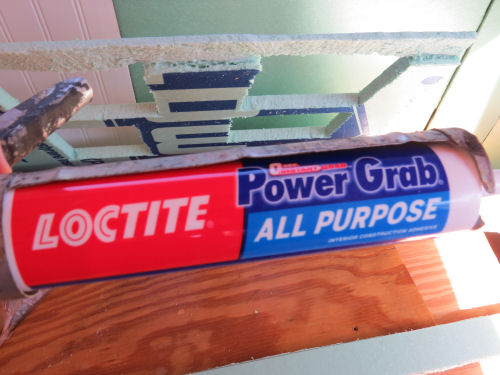 I thought the other outlet wasn't going to happen yet. The stores seemed to be out of single gang shallow boxes, but Lowe's managed to rustle one up today. I had previously bought two, but hadn't thought about the switch for the light, so I needed three. This outlet definitely won't be here, but it's fine for this trip, and I left plenty of wire. It's ultimately going to attach to a structural piece that isn't in place yet. 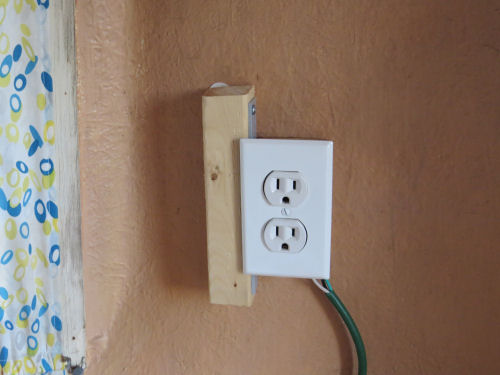 In other news: I edited this morning, but then I concentrated on the trailer again. I did have two NCTA meetings, and two trips to stores. That's what happens when you've just gotten home from shopping and discover your can of polyurethane is all dried up. Sigh. But other than that snafu, it was actually a productive shopping trip- especially the electric box. Of course, I dropped another $70 on hardware and miscellaneous stuff. This trailer is a lot like a boat- a hole in the surrounding environment into which you pour money.

You never cease to amaze me with all the things you do.