Rollin' in the Sonshine - 2021 Interior Tour

I am on my way, although I'm not yet sure how I pulled that off. If I haven't forgotten something major it will be a winner.

These pictures were taken in a big hurry, but you can at least compare to last summer if you are tracking the progress.

The obvious interior difference is the table. It's really neat, but it makes it hard to get pictures because it's so glossy! This is the right side, which doesn't look much different. However, the wall is now done correctly. There are nice hooks mounted at the top edge of the white. These pictures don't show the overhead light, which is a huge improvement. You can just see the corner of a small mirror that is added on the divider wall. The cushion covers are still just pinned on, but the extra spaces are now filled with foam instead of old pillows. That doesn't look much different, but it's much more functional.

And there is the little sunny pillow gift from blogger friend, Lin. 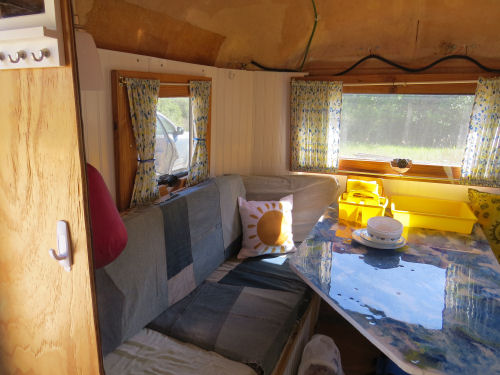 On the left side, there are huge improvements, but you can't see most of them. The bench underneath the cushions is all new. You can see a little of the white front instead of the old broken paneling. The wall is in place, but not completed. But over half of it wasn't even in place last year. Perhaps you can see a small stack of dishes on the table. Corelle came out with a design with blue and yellow so Sunny got a present. Ha! And there's a new set of salt and pepper shakers too.

One thing that does show is that these three windows have the frames mounted. Last year, I couldn't use the rear frame because of the problems with the wall going around that curve. If you could see it close up, you'd notice that it looks pretty weird. But it makes it much easier to put up the curtain, so I attached it anyway. 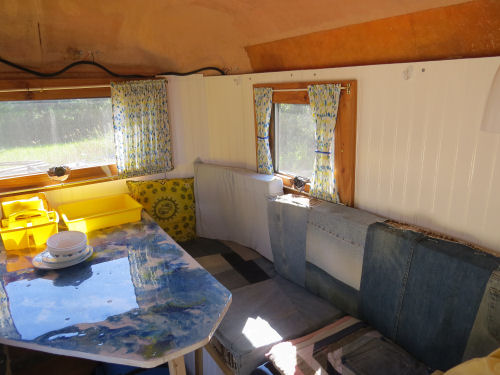 There are almost no changes in the kitchen end. Just the addition of the electric outlets and that little hanging basket thing. We'll see how that works. I was in such a rush, I didn't even move the last few tools out of the way for the picture, and the wires aren't all fastened up yet. If you don't know what it looks like and care, just click on the 2020 tour link. It's all the same. 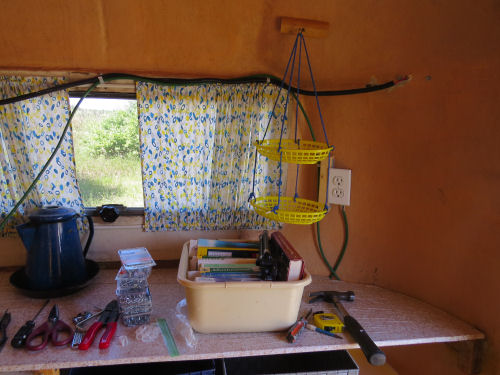 As a reminder, the huge changes were outside with the completion of the paint job, and re-wiring to have LED lights.

I was shooting to leave at noon, and made it at 5 pm. Hey... this is me. At least I got out of here on the day I planned. Tonight I'm with Chuck and Sylvia. They have been very patient with my ever-changing timetable. 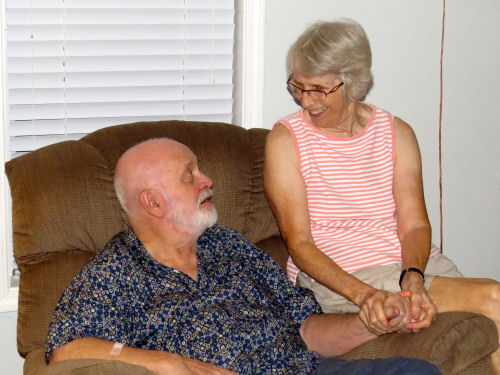 I'll tell you that having a distinctive trailer is going to be interesting. On the way here two different people engaged with me. One gave a thumbs up, and one yelled that he'd like to buy my trailer.

OK, I am d-o-n-e. Four days of full-tilt working and packing have gotten me to the ragged edge of tired.

It looks good. I love that table. Safe travels

Ann and Lin! Hugs to both of you- one of you for real today!