In theory, wiring a trailer is easy. In actual fact, it wasn't too bad, but it took a long time. First of all, can you see that the right tail light is brighter? That's showing that the blinker works without doing a video. Yippie! 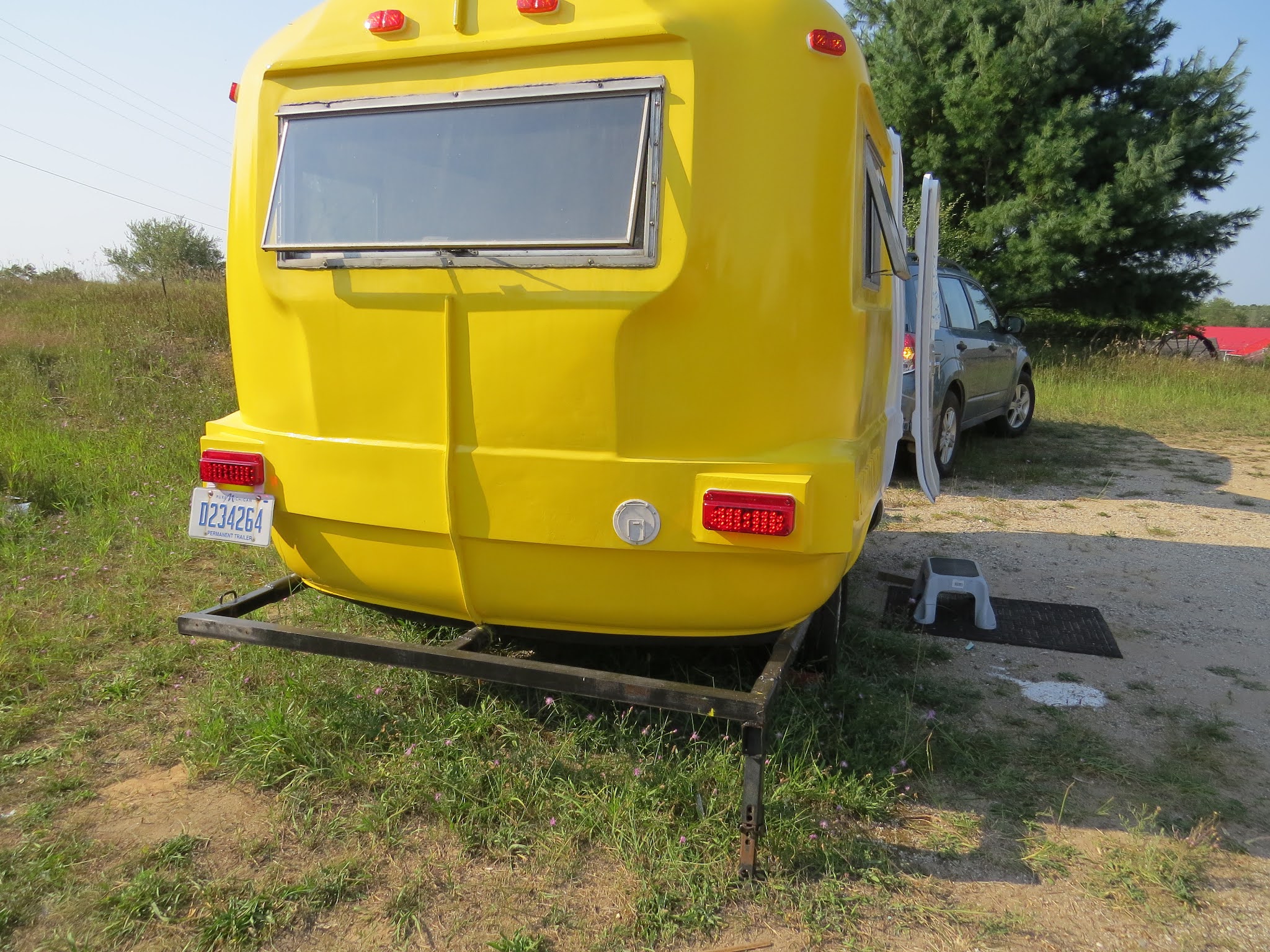 The first thing I have to say is that the new lights I got were packaged so cheaply they didn't even have a piece of paper to tell you which wire is positive and which is the ground. Only two wires on the clearance lights. The taillights have three. Which is the turn and which is the brake, eh?

Well, I went back to Amazon, and in the descriptions of the products, it does tell, but it just seems like a lot of hassle that could be made easier with a little help. The wiring harness came with a LITTLE piece of paper telling you which wire is which. It's so little I had to use a magnifying glass to read it!

But finally, I striped out all the old wires, and was ready to go. I'll remind you of the reasons I wanted to replace the wires. The old ones were a toggled-up mess with different gauges of wire and splices everywhere. Every joint was covered with electrical tape. That's supposed to be good, right? But they were peeling, and even places where I had replaced the tape were peeling. I think it just gets too hot. The other reason I wanted to do this was the plug. The old one was badly bent, and I always prayed when plugging it in that the lights would still work. 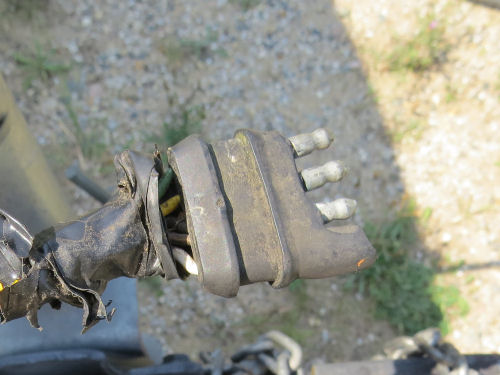 The harness I bought was a kit, and I have to say that I'm sure it's fine for LED lights, but the wire is pretty thin. Supposed to be 16-gauge, but that seems to me like they cheated a little. There was just barely enough wire because I needed to take both the left and right wires down the left side because of difficulty getting over the door.

One thing the trailer did have was a piece of rubber hose that the wires had been run through to get from the plug to the hole where they enter the trailer. I liked that fix, and managed to thread the new wires through it by dropping a cord with a sinker through it while letting it dangle off the deck rail. Then I wound the wire with the cord, and pulled the wire through.

I zip tied this to the hitch. 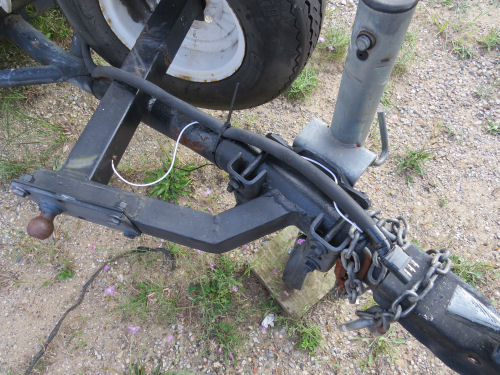 For the interior connections, I used butt connectors where it was just two wires joining. I never knew how much I needed a heat gun. I've used it for several things now. One of them is to shrink these connectors after the wires are clamped in. 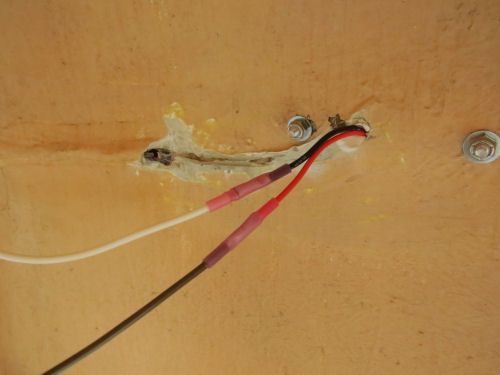 Where a wire Ts into another wire, the process is easy, and then you just have to seal it. What did I do instead of the peeling electrical tape? I bought liquid electrical tape. It's a real mess to work with, and I'm not sure I've done a good job. I put on three coats. Maybe I'll add another tomorrow. But it won't peel 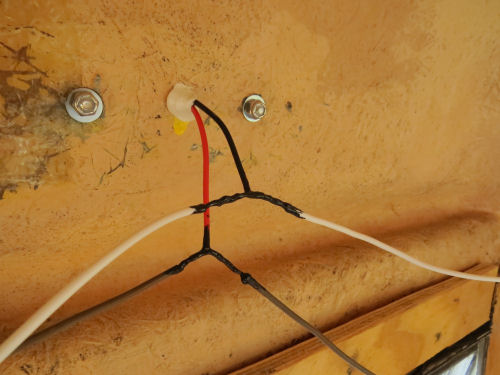 Here's one of the taillights with both kinds of connections. 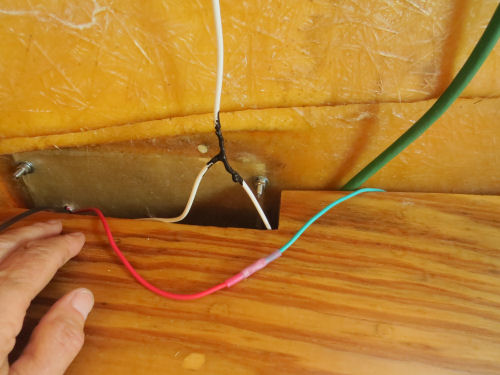 When I got it all hooked up, I had a moment of panic when the lights didn't come on. But I just didn't have a good enough connection for the ground wire. Made that better and everything was great.

There is no other news. Trailer work is all I did. However, I did pace myself a little better in the super-hot middle of the day. I did require extra sugar (cookies) and extra salt (crackers) to keep up this level of activity. We'll see how many pounds I gain from that indulgence.

Aeons ago I installed a wiring harness in an old pickup truck, so when I say kudos to you that comes from someone who knows. (Especially the paucity of directions. What? We are supposed to intuitively know how to wire a vehicle?)

I wouldn't have a single clue as to what to do with any of the wires. I had no idea there was such a thing as liquid electrical tape.

Lulu: "Wow, it sure is a lot of work to set things up to let people know which direction you're planning to turn. Dada says lots of people in cars who don't have to do any of that work still don't bother to do it!"

Vanilla- it's all very confusing. White is supposed to be ground, unless it's black, or in the extension cords I used to wire the trailer interior the ground was green.

Lulu- your Dada is a very observant man