The Not So Quality Part of Yesterday


There was one part of yesterday that was sad, but I'm going to turn it into a learning opportunity. The warm sun called out the snakes as well as my turtle. I saw three different ones, and all were dead in the road where they had just been trying to take the chill off their bones. Literally. Snakes are cold-blooded. Two were garter snakes and not so good to look at. The other one wasn't.

This is a blue racer. Very much alive. Picture taken several years ago. 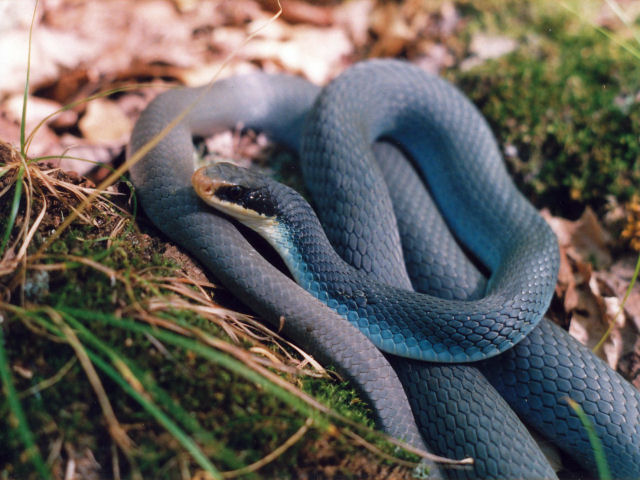 This is not a baby blue racer. Picture taken yesterday. Looks alive, but it's not. Also, you might think I'm nuts to point out that it's not a blue racer. It looks very different.

However... Baby blue racers don't look anything at all like adults. Really small ones like they've been covered with those little checkerboard Italian tiles like you see in ethnic restaurant floors. I know this for a fact because once long ago some little boy brought a blue racer in the house where it got loose. Turns out it was a pregnant mama, and she had a whole swarm of little blue racers under the piano. Blue racers are ovoviviperous, which means they don't lay eggs, but the young are born live.

At the time, I never thought to take pictures of the wonderful mass of worm size babies. Perhaps I didn't have any film. It was back in those days. Remember them?

Anyway, between the checkerboard stage and the adult stage there is a phase that looks a lot like this small snake. I wanted this to be a blue racer to show you, but I didn't want it to be a blue racer because they are becoming quite rare. I really hate seeing them killed in the road.

So the good news is- this is NOT a blue racer, but it took me all evening to figure that out. You might wonder why it took so long. Well, when you are trying to learn something without someone who really knows how to point out the things to look for, it can take a while. Now that I have it figured out it seems quite simple.

This is a baby Northern Water Snake, Nerodia sipedon. And it doesn't look much like the adult of that species either.

I have some decent pictures of adult Northern Water Snakes, but I'm out of time to hunt them up tonight. And the best pictures I ever took of them were with my very first digital camera that saved pictures to a floppy disk. And the disk got corrupted. That's really sad. Lin, you need to cover your ears, because they were of one of these snakes eating a frog.

And unless you are a frog or some other small critter, these snakes are not dangerous, although they will try to bite if you pick them up, like any snake. However, they are not poisonous.

Anyway, the adults are much darker and the bands fade and become barely visible. They may approach pure black in color. Each scale has a little keel that breaks up the light so they look much duller than many snakes.

Back to the one I found yesterday. After I realized it was dead, I had the chance to look at it really carefully, and take several pictures. Good thing I did. Here's the key feature that cinches the identification as a Northern Water Snake. See the pattern on its belly? 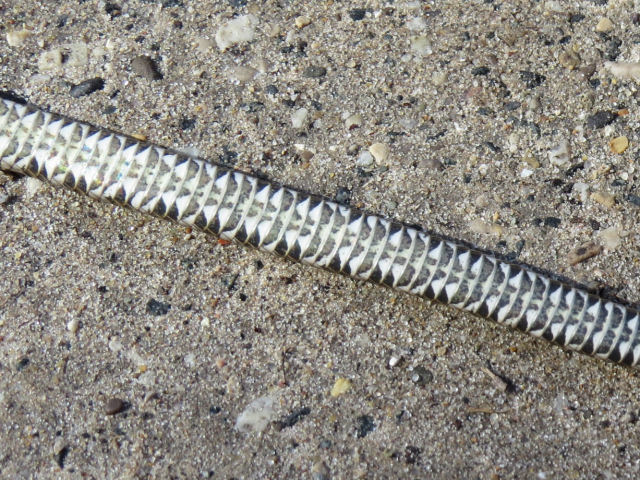 Those little half moons on each side of the center line are definitive. Even the adults have them. They may range in color from light rusty, through brown, to black.

So now you know.

Email ThisBlogThis!Share to TwitterShare to FacebookShare to Pinterest
Labels: learn something new, snakes

Such beautiful creatures! And, despite the rhythm of life (and death), they offered you a gift. Thanks for sharing that with us.

An ovoyikemporous snake in the house? One thing about your nature studies they are thorough. Subject not high on my list of favorites, but such reptilian creatures are part of the ecosystem, too.

Interesting information and photos.. I hate to see any animal dead in the road..even the snakes.. Great photos. Enjoy your day!

My Mom shared a story from her school days she was with her best friend (L) on the friend's family farm. Soon they heard L shouting and laughing as she chased a blue racer across a field. Soon L's tone changed as she came running back with the blue racer chasing her.

i'm not a big fan of snakes but the markings on them are very interesting.

My neighbors always had snakes and I can remember searching for a lost one in their laundry room. I'm not sure if we ever found it.