Backpacking- Beginning and Day One


This is going to be a WAY longer than usual blog post just because I feel like giving you more than the highlights. It's almost going to be a trail journal, which are mostly boring, but someone might be interested. I'll try not to get bogged down in trivia.

I made the effort to get myself and my gear organized to go on a two-day backpacking trip. I was highly motivated by the North Country Trail Hike 100 Challenge (hike 100 NCT miles in 2016). I'm in danger of not completing it unless I get busy. That just won't do! Although I've hiked 250 Buckeye Trail miles this year, they are not miles that are concurrent with the NCT, and I'm way behind.

This is a cheater pic. I did take it on this hike on Sunday, but I'm presenting it out of sequence, just because it's so beautiful, and it pretty much shows how I feel about the North Country Trail at any given moment. It just calls to me. 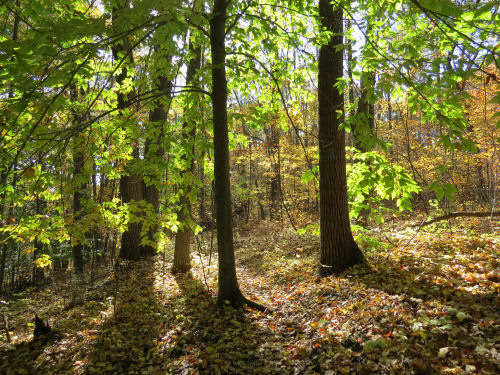 So I left Saturday late afternoon (it gets dark about 7 pm), and was dropped off at 96th St just after 5 o'clock by trail friends Michael and Michelle Sweet. That's the Lake/Newaygo County line. 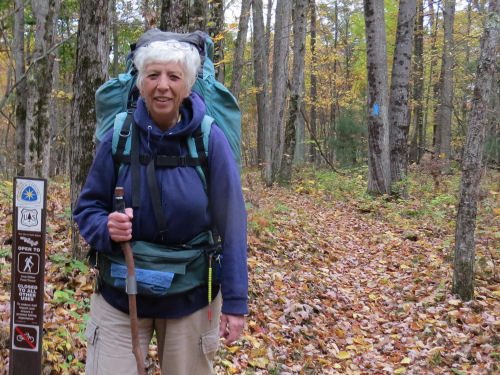 My goal for Saturday was to get just far enough in that I could call it a start and get camp set up before dark. I walked a half hour and started looking for a place. Dispersed camping is allowed in the Manistee National Forest, but you are supposed to be 200 feet off the trail. I found this nice little spot to tuck in. I'd already eaten, so just had an apple for a snack (my one weighty piece of food and I knew I was going to eat it right away), and read for a while.

The temperature got down to 36 where I was, and I was mighty glad I did take the extra thermal blanket or I would have been cold. My sleeping bag doesn't have the insulating power it did 25 years ago. Ha! I'm thinking of replacing it with a very expensive one.

The campsite picture was taken in the morning as I was heating water for breakfast. 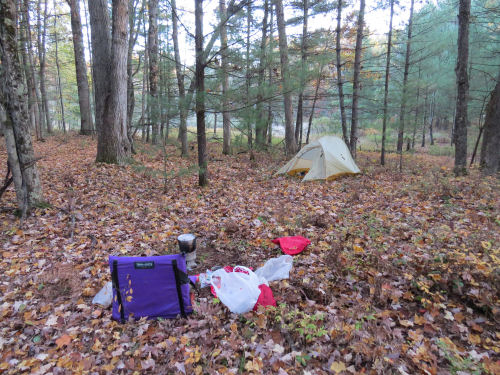 Here's the same spot just a few minutes later, just as I was getting ready to leave. This is called "Leave No Trace." You want to leave a dispersed site so that no one will be able to tell you were there. Sometimes the grass might be flattened a bit, but you should make no permanent changes. In the fall it's easy to fluff up the leaves and your presence becomes invisible. 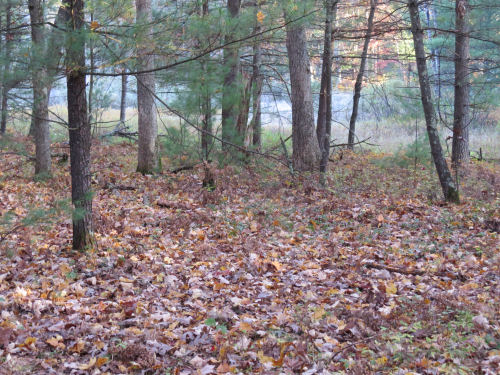 The temperature was up to 39 degrees F when I began hiking. I was only a few minutes down the trail when I realized that there had been frost in low areas. 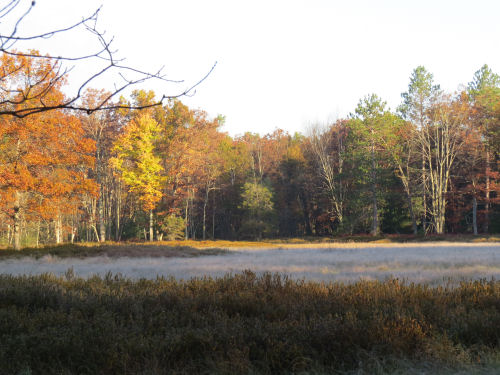 Even though it was still really chilly, I stopped at Cedar Creek, the first stream, to fill my water. I have a couple of different purification systems, but I took the Steripen to treat my water with UV light, and because there was a fair amount of debris in the water I also filtered it through a plain old coffee filter. 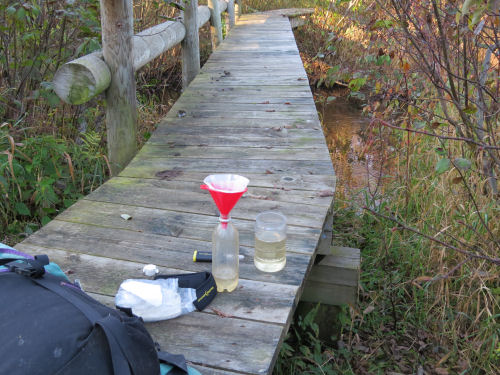 I did make one concession to the fact that I haven't actually backpacked in a couple of years. I took a short break every half hour. That seemed to work well. I didn't get sore at all, anywhere. And my planned mileages weren't long enough that I needed to push really hard.

This section of trail passes by a series of lovely small lakes. Most of my pictures are blurry though. I kept clearing the lens, but I guess it just kept fogging up. Anyway, these two closeups are a nifty trick of the morning light. No post-editing done. 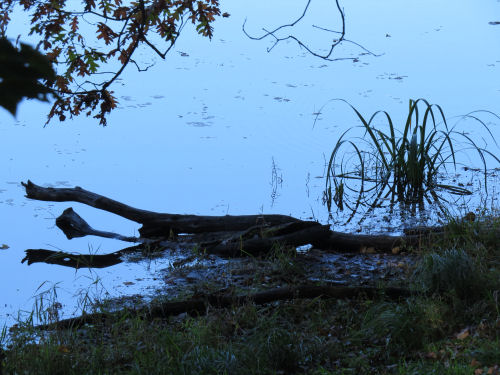 The day continued to warm until it reached a high of 63 degrees with sun. I met several other hikers, and saw a fair amount of wildlife. I'll give you the whole list tomorrow, but the treat of the day was this slim little garter snake. 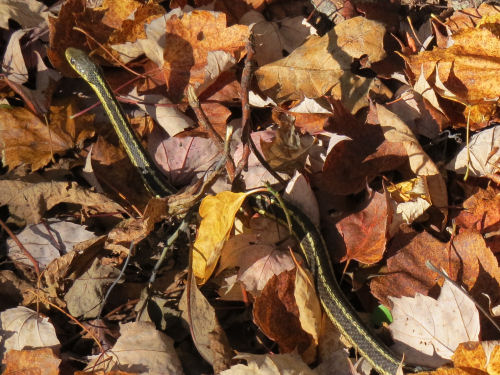 You know I love to put polka dots and stripes together, and I even got the leaves to cooperate. 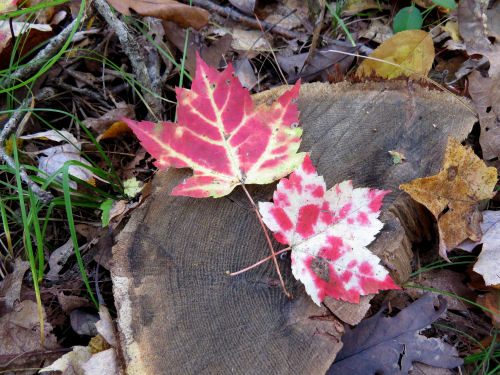 At one of my breaks I looked down at a fallen tree and saw this blue nail sticking out. A mystery? Nah. Not if you do trail work. This tree used to have an old nail-up blaze that got painted over with North Country blue, and then the blaze fell off and the tree fell down! But it was good for a chuckle. 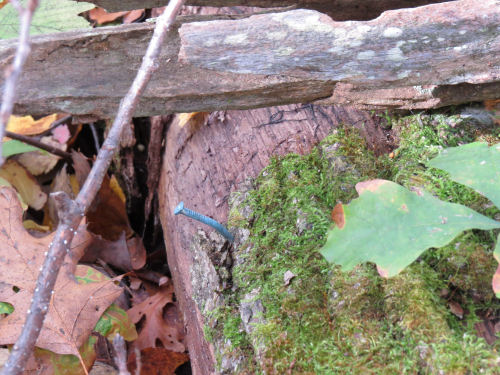 My pack (Shamu) was riding well, and feeling like an old friend. 35 pounds in a well-fitting pack with a hip band isn't much worse than 20 pounds hanging on your shoulders. Better, really, it doesn't make your arms go numb. Nevertheless, I had passed my self-prescribed goal for the day and told myself that I'd start looking for a place to camp in 30 minutes (at 3:45). However, in 20 minutes, I came to an unexpected stream with clear flowing water. 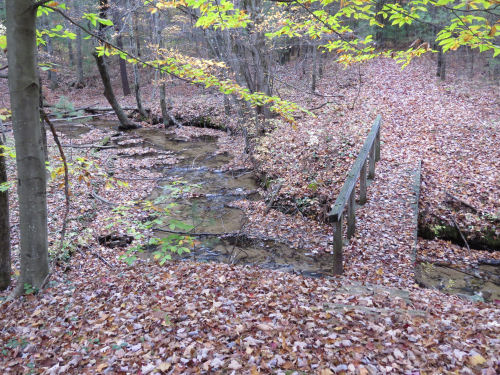 There's nothing so secure as having water near your campsite. Done deal. I nosed around and found this red pine plantation just a little bit upstream. Talk about a cushy place to make your bed! 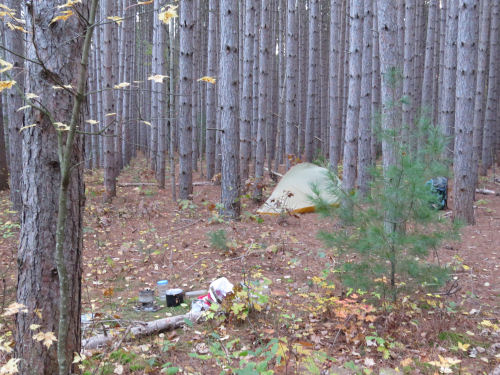 The camp chores all have to do with basic needs. Above you can see that my tent is already set up (bed made up inside, most gear put in its nighttime location). Next I fixed dinner. Beef stew with dumplings. Yum. 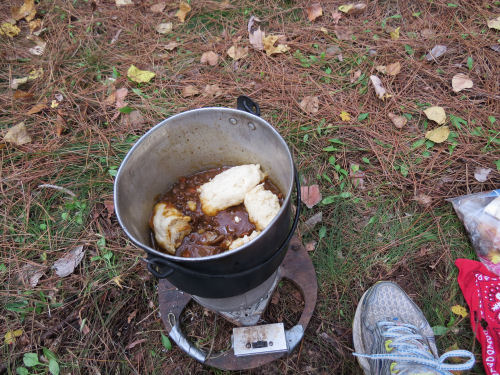 I cook with a little Sierra Zip stove. It uses wood in a firebox with a fan. It's dirty and sometimes smokey, but I like it a lot. No worries or weight with fuel. 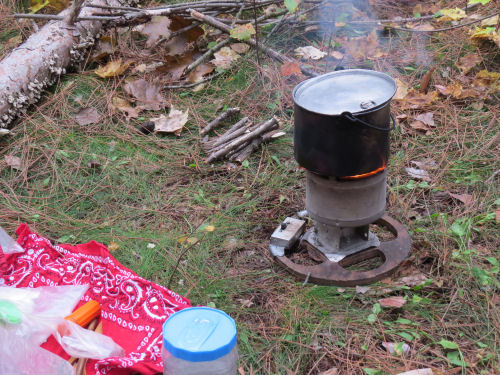 Firewood collection? Yup. All gathered and protected so it will be dry in the morning. That's it. This amazing little stove will boil 2 cups of water with just those few twigs. 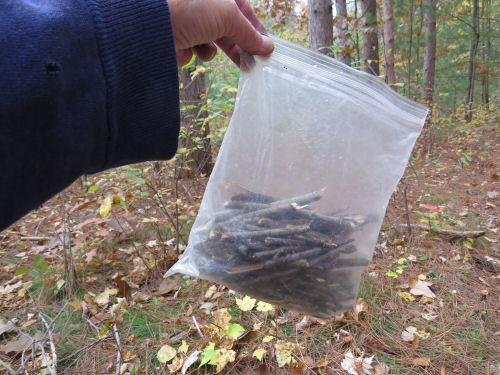 Next chore- hang the food (and trash) well away from the tent so the critters won't bother you and won't get the food. 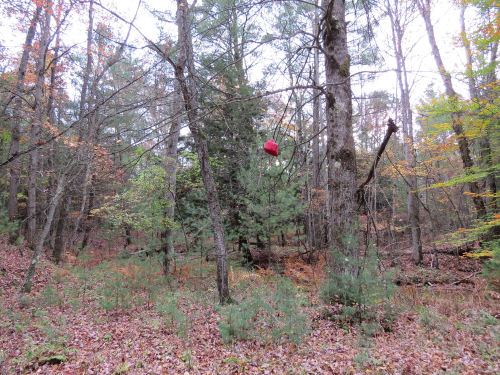 Cleanup is done, everything is stowed for the night. Now I'm ready for comforts. My chair. Cushy socks and sandals. A chocolate for dessert, cup of hot tea, and a book. Life is good! About 12 miles for the day. 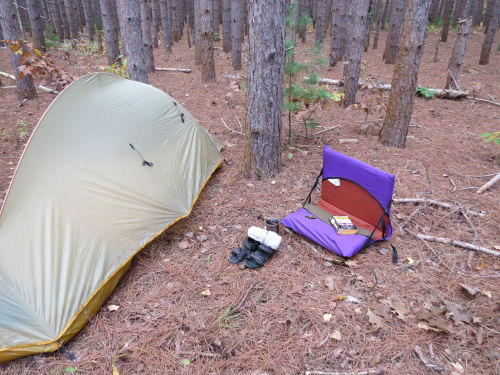 Come back tomorrow for part two unless you were totally bored! If you were, I can't help you. Haha. Because this is real living to me.

Not bored at all! On the contrary...I am envious. Wish I was backpacking and camping with you!

This isn't boring, this is great! Enjoy the detail of how you camp; it's been a long time for me! I managed a 6 mile walk last week (see my blog), and felt like that was a huge accomplishment! But I'm determined to do the entire Bruce Trail here in the valley, bit by bit. Make sure you get those 100 miles in! Enjoy your blog every day, but especially this post.

Not boring. The extra detail answers questions that I have wanted to ask. Favorite pic or pix? That's too hard to answer. I like the morning pix of water, but also the garter snake and leaves and . . .

You always impress me with your hikes. I'm pretty sure I would be a bit scared sleeping out in the woods all alone. Not to mention I wouldn't like the cold one bit