14.9 Miles and a Stong Opinion


Day three did not feel very good, but I got 'er done! My legs were very tired in the morning, and one stretch in the middle did not help. More about that in a minute.

The day was mostly overcast, but a little warmer than yesterday. Still mostly through farm country. Largely soybeans and corn. The soybeans are being harvested. In fact, as I write this a huge combine is clearing the field right in back of the campground. Hope he finishes before we want to go to bed!

But I did pass a few typical farm animals. Good old Holsteins... the standard cow of my childhood. 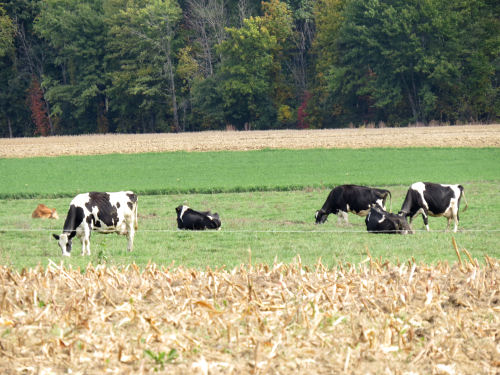 And some quakers are always good for a chuckle or two. 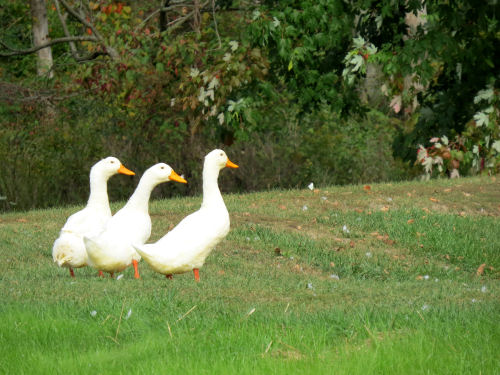 The day gave yet another bonsai offering. 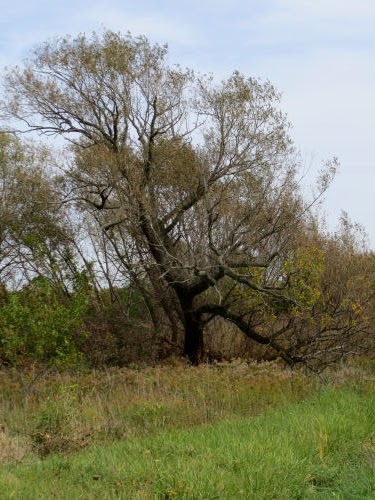 And my faithful support crew decided to come meet me one stop before the end, so I slack packed the last mile and a quarter with only my camera and belt pack. Pretty cushy! 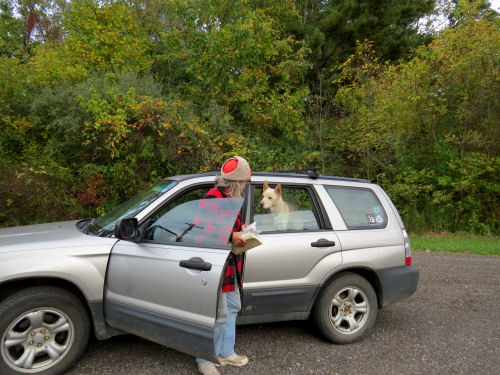 That last mile was one of the nicest of the day. It went through Spencer Lake Wildlife Area. The color is just beginning on the shores of the lake, and it was very pretty. 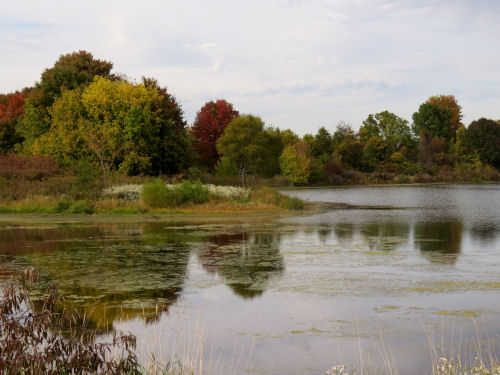 I thought there wasn't going to be a house of the day, and it isn't actually on the trail. But as we were driving back to camp this beauty appeared on a corner. It's even for sale. I'd like to buy every wonderful old house in the world like this and fix them up. I know... totally unrealistic, but I love old houses. Please notice I accidentally captured myself taking the picture not once but twice in the lower left. 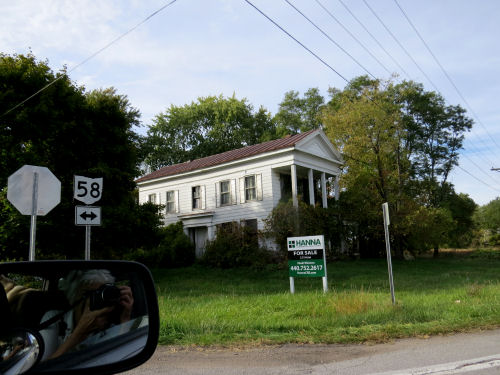 Now for the middle of the day. It was only two miles (plus a detour), but it wasn't much fun. That's not something I'd usually say about off-road trail. It was through Findley State Park. I've talked myself into giving them 4 points out of 10, but until I got almost all the way through it was only going to be 1 point.

That first point is for allowing the Buckeye Trail to come through and be off road. That's good.

The trail from the road into the park was terrible. It had been slash logged and the debris just run down with a bulldozer and left. That makes terrible footing... all you can do is stumble through. Then I got to the first parking area. Nicely marked, good signage and blazing. That's the picture I put on Facebook earlier today. Wrong. You follow that trail to the right (as it says), and it leads you to a valley where there is no blaze anywhere. So the map said the trail goes south. There was a trail going south, so I took it. After two disc golf cages and one tee, without a single blaze, I pulled out my phone and got my location on Google. Sure didn't look like I was on the trail I was supposed to be on. I considered bushwhacking east to the trail I wanted, but I'd already been in knee-deep poison ivy and the terrain looked like there was another valley between me and where I wanted to be. Could have been a swamp in the bottom of that. So I backtracked. Hunted the area where the blazes ended even harder, but there was no other blaze.

Went right back to the sign where the blazes said turn right. But now I knew that the trail I wanted was to the left. So I turned left and found that in just 10 feet or so. Not marked as Buckeye Trail, but it matched where I should be on my map. I took it.

Next issue. The park had nice new trail maps at every junction with your location labeled, etc. But they don't match the map on the Buckeye Trail maps. And, the park has named two trails "Buckeye something else" that aren't the Buckeye Trail. If you took those, you'd end up somewhere completely wrong. Finally made it to the crossing of the creek that drains the lake. Here's where they started to pick up the extra 3 points I'll give them.

Point #2 was for two good bridges. One across the creek and one across a swampy area.

Point #3 was for getting the Buckeye Trail off the bike trail and having it pretty well marked on the east side of the park.

Point #4 was for having the turn to leave the park well marked.

Anyway, by the time I got through that little section it was past my lunch time and I still wasn't halfway for the day. This does not make me a happy hiker. So I had a snack, walked another hour and then had my lunch. Ester and Jade drove by, and cheered me up. Then I walked the last five miles of the day.

Oh yes, and had to plastic bag the clothes I was wearing and wash up really well when we got back to camp. Ivy is pretty dried up for the season, but I don't dare chance ignoring it.

So, there you have today's long saga. Only one more day for this trip. That always makes me sad.

You are a trooper, Joan. All that could have put me completely off the hiking. Was it really only 14.9 miles, even with the back-tracking?

That was an adventurous day. Not one, but two bonus points for the house pic. Well done.

Whoa! Backtracking? That first sign, you know "Turn right"? Placed by someone afflicted even as I who knows not right from left. Arrows?