There is no "next" step that's completely done yet, but I've been working some nearly every day. Getting the little fussy places cleaned that I ignored the first time around is really slow.

I've worked on both paint residue removal and fussy stuff every day that I've done anything, but I'm only counting them as one or the other in these reports.

At any rate, by trying several things that didn't work well, I made my way to a process that gets the last of the thin paint gunk off the gelcoat. It also does a good job of scrubbing off any little spots that might have been missed in the scraping. I'm trying to be extra fastidious because those little spots will be places the new paint will chip if not removed.

Here are the tools you need: Lacquer thinner, kitchen scrubbies- the kind with a sponge on one side and an abrasive pad on the other, the cheapest paper towels you can find- get a few rolls because you need clean wipes constantly. Plus the Citristrip. And I did wear gloves when playing in the lacquer thinner. 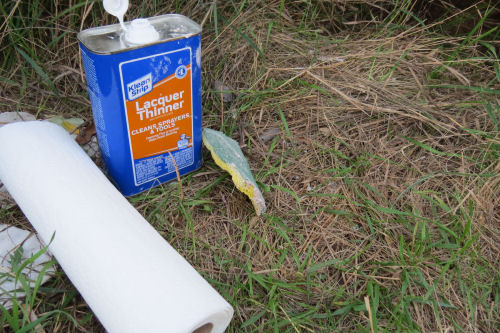 These pictures aren't as good as one could wish for. I tried to photograph an area where the residue was thick enough to really see, but it's difficult anyway. If you look at the surface in real life, on an angle, you can clearly see a dull residue even if there is no color change. And you can easily feel it if you run your hand across the surface.

This picture shows an area on the left that has been cleaned, but not on the right. 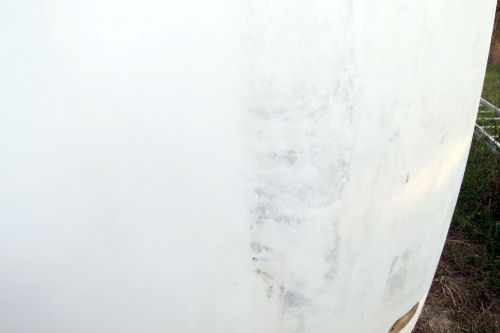 I applied a VERY thin coat of the Citristrip stripper over the area to be cleaned. Brush it out as thin as you want. Thin is good for this step.

Not sure why this picture is so overall pink unless I got some refraction from the color of the stripper. Anyway, you can see vertical brush strokes on the area I'm trying to clean for this demonstration. 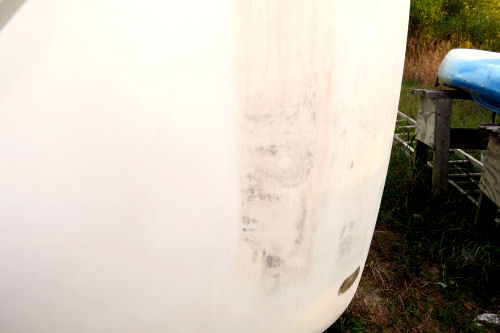 Let it sit for at least 15 minutes. Longer is fine. I liked the way it worked best when the weather was warmer and it actually dried. It made the next step less gunky.

After the wait time, pour some lacquer thinner on the abrasive side of the sponge. (Don't use just an abrasive pad because the solvent just runs through it. The sponge holds the liquid in place.) Scrub that area, adding more thinner as needed. A little extra elbow grease will get the spots you might have missed with the scraper. Again, the whole picture has a very pink cast, but notice the circular scrub marks. 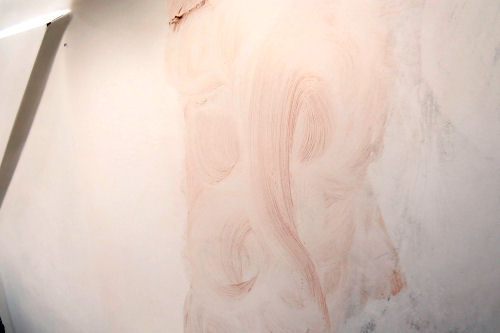 Wipe the area down with paper towels, changing them as often as necessary to actually remove the gunk rather than just spread it around.

Finally, take a clean paper towel, pour lacquer thinner on it and wipe the whole area down again. Do this until no more pink/orange gunk shows on the towel. I kept refolding the towel to get a clean face with each swipe- you can use both sides too. 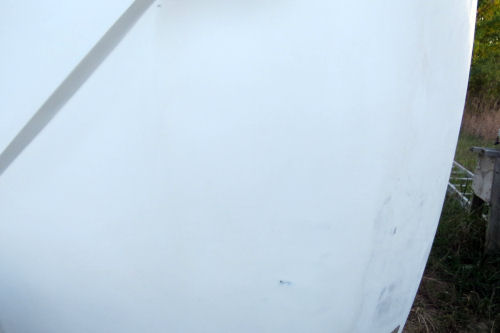 When this dries, you can run your hand over it and feel that it is really clean. You can see a faint line farther to the right that is the border with the area I just cleaned and the next one to do.

Finally, you can wash the sponge out with plain water to reuse the next day. Just make sure it's mostly dry before you use again. Rock hard dry, however, is not good. The solvent actually doesn't have any ability to moisten the sponge part.

So, how am I doing? Sigh. Not even halfway. That said, this is pretty easy, so on the days I work, I'm trying to spend more actual time on the fussy and hard parts to clean. A few places are turning out to be real dogs. More on that next time.

Accountability report:
Worked all day.
Came home and worked on trailer until dark (which is getting really short).
No writing has happened, but I could get a few words banged out before going back to work for the night. It's possible.

The last time I did work like this was when I was a teenager, and it was very very hard. The end results are worth looking forward to though.

You're doing great with this. I don't know how you do it because when I get home from work I rarely have the ambition or energy to do anything

Sylvia and I are following this story with interest. That trailer is looking a lot different from our first view of it.