A Long Ago and Late Veteran's Day Story


My family has not been known for generations of military service. That said, my grandmother joined the D.A.R. as a descendant of a Revolutionary War soldier. Maybe I'll write about that another day.

My dad was not in the service. He was too young in WWI and too old in WWII. My half brother was in the Seabees.

I only learned this story a couple of years ago when I came across this newspaper clipping in my grandmother's papers. 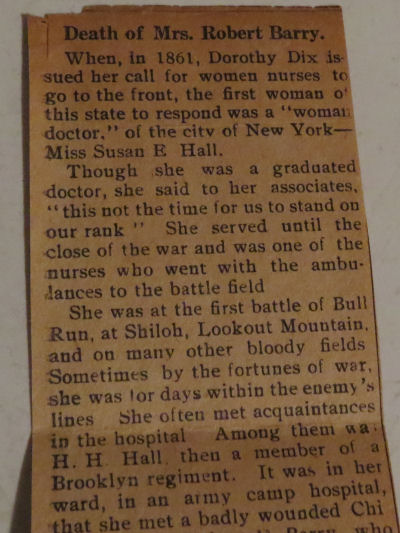 Although there is no newspaper banner or date, from reading the article I can tell it was probably a Spencer, NY paper, and was definitely in 1912. The column is a death notice for Mrs. Robert Barry, who was Susan E. Hall.

Here's how it begins: "When, in 1861, Dorothy Dix issued her call for women nurses to go to the front, the first woman of this state [New York] to respond was a 'woman doctor.' of the city of New York-- Miss Susan E. Hall.

"Though she was a graduated doctor, she said to her associates, 'this is not the time for us to stand on our rank.' She served until the close of the war and was one of the nurses who went with the ambulances to the battle field.

"She was at the first battle of Bull Run, at Shiloh, Lookout Mountain, and on many other bloody fields. Sometimes by the fortunes of war she was for days within the enemy's lines.

"She was a recipient of many honors. Possibly her most cherished possession was a gold badge, (only five were ever granted) which was given her for her distinguished service in connection with the Twelfth Army Corps.

"She never could forget the horrors of the civil war. With tears streaming down her face, she would sum up her stories of war times with 'There should be no more war. War is terrible.'"

It also tells that she nursed a wounded Chicago soldier, Robert Barry, whom she later married.

The article also mentions that she had a "very notable" collection of autographed photos from soldiers and other tokens. I hope some museum has that, and I wonder if I could track it down.

Yet another really tough lady in my lineage. Wow.

She has a honored place in the Hall of Heroes.