Tonight I went to the local college production of Grease.

I might as well start out with two bottom line statements. I don't particularly like the story line of this musical. In fact, I don't like it very much at all. That said, this was a truly outstanding production.

The pictures I have are a function of pure luck- not necessarily related to major points of the story. I took lots, but in most cases the low lighting resulted in blurry images. Actually, I expected an announcement that no photos were allowed, but there wasn't one.

This is later in the play, but it's the best picture to show the set. The live orchestra (jazz band) was on the upper level. Actors could also use the steps for staging and exits and entrances. With a basic concrete and metal railing school look, it's nevertheless quite a standard Shakespearean set. 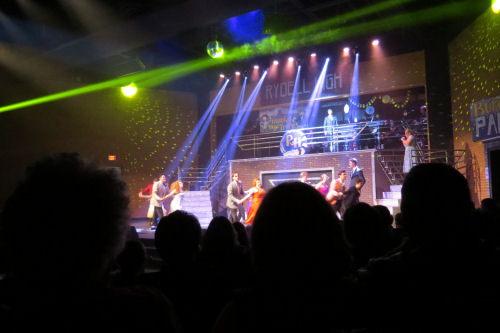 The girls, the Pink Ladies, share their dreams and fantasies at a pajama party. 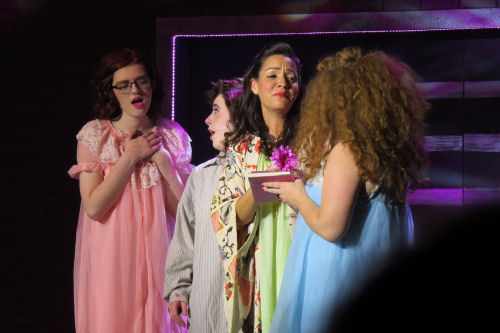 The greasers, the Burger Palace Boys, are more aggressive about what they want. This car has a fun story. It's a 1939 Dodge Coupe, cut down to become a convertible. A local auto body shop did the work, painted and reinforced it for the dancing scenes. It's pretty impressive when a real car rolls out onto the stage! 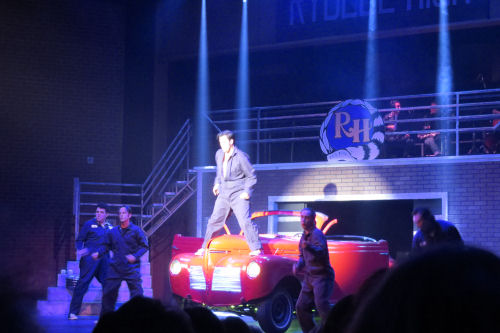 Here, Frenchy wishes for a guardian teen angel to help her figure out her life. The play delivers one by bicycle. 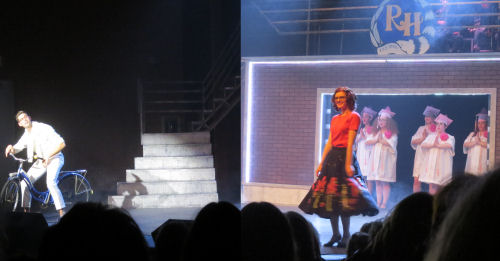 At the end, the one girl with standards and a sweet personality decides that isn't going to get her anywhere, and she joins the others in their somewhat raunchy teen lifestyle. 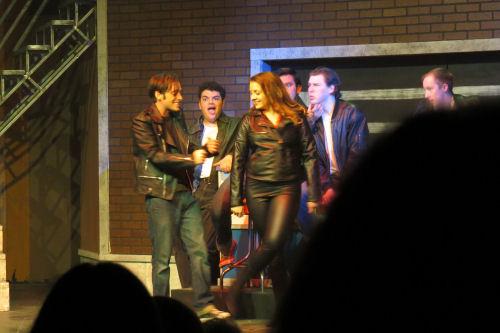 On an absolute scale, the productions of Grease that one sees on community and school stages is incredibly tame compared to the original Chicago version which was produced for the shock value. It was supposedly very vulgar and lewd.

I've always taken issue with the idea that this is really what high school was like in 1959. Of course, I don't know much about big city schools, but most of America would have dropped dead before acting and talking like the people in the play, even in the late 1950s.

That said, a lot of the music is highly popular, and fun. It's certainly a showcase of typical teen music of the era.

This production was really quite amazing for a small community college. There was no one aspect that was a weak point one needed to overlook. The kids must have worked like crazy to get all the dance routines down pat. Several locally well-known actors had parts, and they did not disappoint. Less well-known stage personalities delivered quality performances.

The play is being presented on three weekends for a total of nine performances, and seats have been sold out so far (one weekend to go). I got in by waiting around and taking a no-show seat.

(Just FYI, for contrast, the last local musical I went to was so poorly done I didn't even show you pictures.)

I've never seen Grease preformed on stage. I've only seen the movie. Glad to hear this was done well

Sounds like a fun night and a good show. We went to see a neighbor's community theater production of Legally Blonde...and that was a fun show. They actually had 2 live dogs in the show--which was funny. They did really good job though. I love a live show.