Imagine my surprise when I got home from work and there's a train parked in my back yard! I should have taken a shot without zooming in, so you'd see what I see from my deck.

I have to say that I don't think I've ever seen a train stopped here. It's single track, so there's no way they were just waiting on a siding. 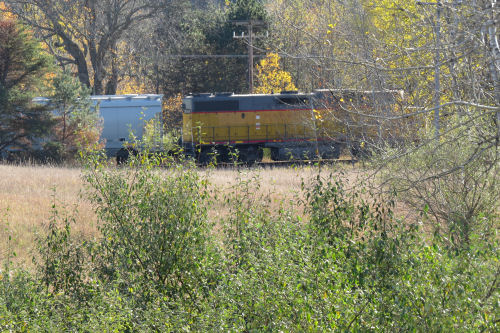 I had to go back and find out what was up.

You can see a spot of green in the window- that's the back of the engineer's jacket. 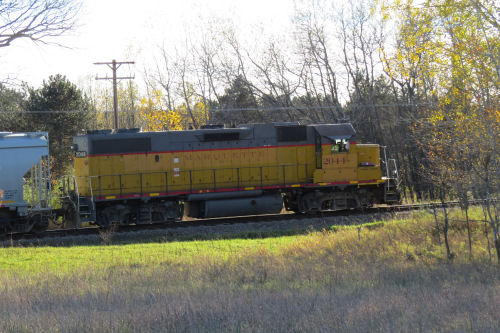 I hollered a "hello," and the engineer and conductor actually came out to talk to me. They were bored stiff. The track was being worked on between here and Ludington, where they were headed. Instead of telling them before the train left Baldwin, they were told en route that there would be a slight delay. Right. They'd already been there three hours.

I learned a couple of things. I knew Marquette Rail operated between Ludington, Manistee and Grand Rapids, but not the actual logistics. Two separate trains do the Ludington-Baldwin and Manistee-Baldwin routes. The cars are sorted at Baldwin and run by a third train to Grand Rapids.

I told the guys I'm a railfan, and had seen an engine with the new paint scheme out here only a couple of times. They said another one is in the shop being painted. So perhaps eventually I'll get to see pretty engines more often.

Told them about the fire the train caused this summer. He said that wasn't that unusual, and most of the time, they never even know it happened. Last year the train he was driving started a fire near Manistee that burned about 3 acres. Who knew that diesels caused so many fires?

Offered to make them some coffee, but they said they were good. 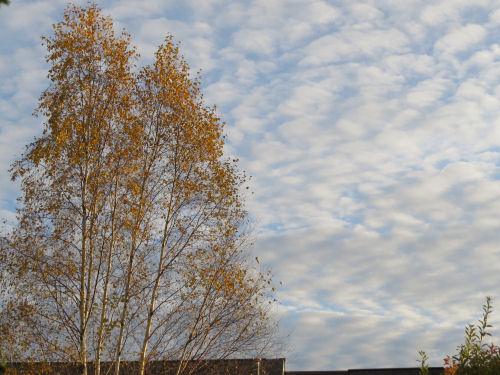 Accountability Report:
Worked all day. Did some stuff this afternoon- I may tell you about that tomorrow.
No writing, although I have an hour yet before I have to go to work... we'll see if I can talk myself into doing anything. I have hopes for tomorrow afternoon.

Sounds like an interesting encounter. EMD GP-35? Did you ask if you could go inside the cab? If the engineer was really bored he might have let you drive the engine a few feet.

The first thing I said to myself when I saw your post was, " Ooh, a train!" I think, or at least hope, that most people think trains are fun. I would have never thought to talk to anybody on the train. It seems all the interesting stuff happens to other people. Maybe it's because I don't talk to people enough.

How annoying for them that they had to sit there all that time. Good for you though that you got to chat and learn a few things. I'm sure they appreciated the company too

That was a very fine meeting. How fortunate you were to have a chat with those fellows and increase your knowledge of their work.

hello sharkbytes its dennis the vizsla dog oh hay wow most peepul only hav model trayns at there howses and luk yoo had a reel wun!!! with peepul inside of it and evrything how kool is that??? ok bye