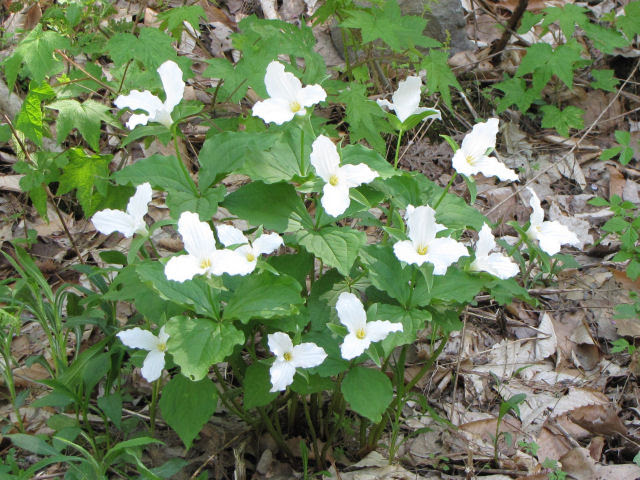 I decided to go for pretty flowers today. I've now seen five different kinds of trilliums along the North Country Trail, and we saw three of the kinds on this hike. The above picture is the most common of the showy flowers, the large-flowered trillium. It almost glows white in the woods, and often covers whole hillsides with its bright blooms. I suspect that most North American readers have seen this one. 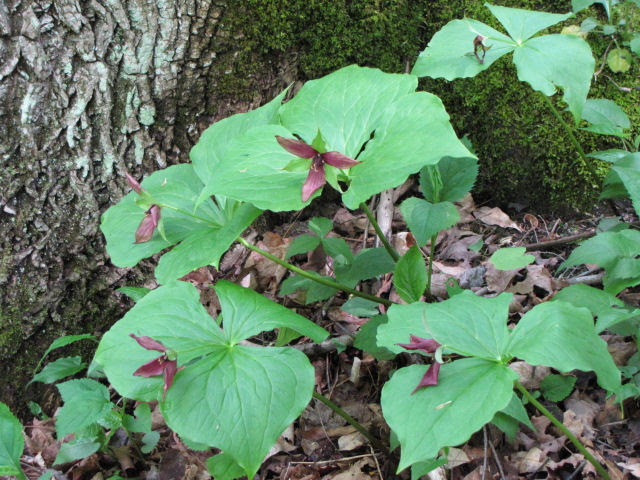 Perhaps you've seen this one, too. It's less common, but not really rare. This is the red trillium, or wakerobin, Trillium erectum. The flowers smell bad. I've seen it more often in New York than Michigan, but it is found here. In the picture above, it's almost at the end of the life of the bloom, and they are starting to fade a bit. 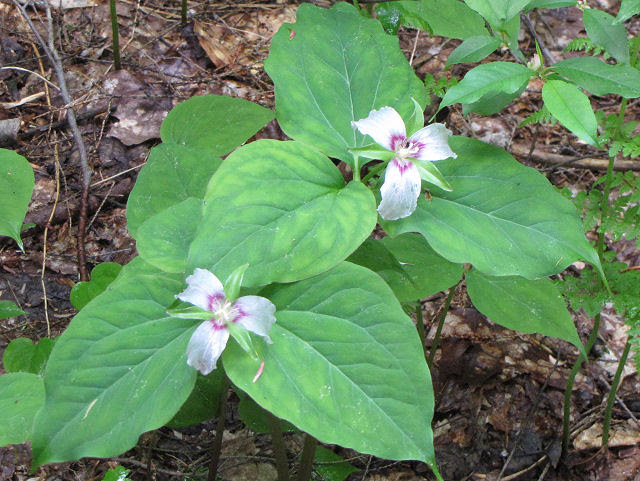 Finally, I saw this painted trillium, Trillium undulatum. Although the blossom is really on its last legs, it's memorable because it's seen much less often. I studied the picture really carefully to be sure of the identification, because the white one often fades to pink as it ages. But I feel pretty sure of the identification. The band of pink evenly spaced around the center of the flower, and the pink stamens, instead of yellow ones. I don't think the picture is good enough to put on my photo pages because the flower is in bad shape. Hope I see another one some time! 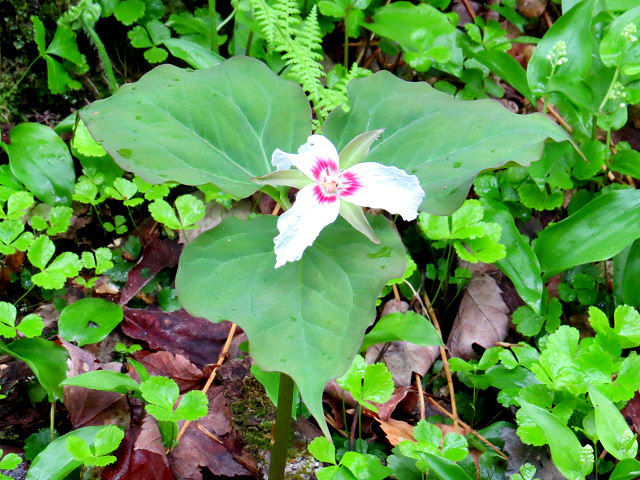 Here's a closeup of the center. The flower really looks like it might have been frozen, especially since that top petal is just flopped over the back of the leaves. But you can see the pink stamens, and the definite pattern to the pink band. This is only the second time I've seen this trillium, ever.

The other two I have seen in the past are nodding trillium and sessile trilium (or toadshade). I think that only leaves one for me to add to my life list, the prairie trillium.

Pretty exciting to be adding flowers to your collection. How nice for you. I had a good day with Poetic Shutterbug, looking at flowers, as well, at the Botannical Gardens. We did a lot of laughing!

I'm sure that I have seen these but at the moment don't really recall. They are pretty, probably one of those things that I see all the time and just over look.

Your are having different flowers that I won't find over here.

Both you and Ratty had forest flowers today--I LOVE those! I am always amazed at what grows under the tall trees and dark canopy of a forest.

Trillium is a lovely gal,
I'd like to think that she's my pal.

Ann- well, I suppose I should have said northern North America. Maybe they aren't where you are.

rainfield- it's true... I think trilliums are only here.

Lin- Ratty did one of my favorites!

Chuck- what a nice rhyme for such a favorite flower of many.

I would love to see the trilliums but your photos will do as I love to see what others are seeing on their patch.

I've been watching for trilliums now that I know what they are. I'm glad to see these great examples. They'll go a long way to helping me remember.

Carol- I hope to get pics of all the kinds I've seen on my photo pages this summer. But... we'll see how much I get done.

Ratty- Seems like you should be seeing lots of them... it's probably too late now in SE MI though.