One of the funniest species of domestic bird on the planet has to be Guinea Fowl. I encountered some on a farm I surveyed. 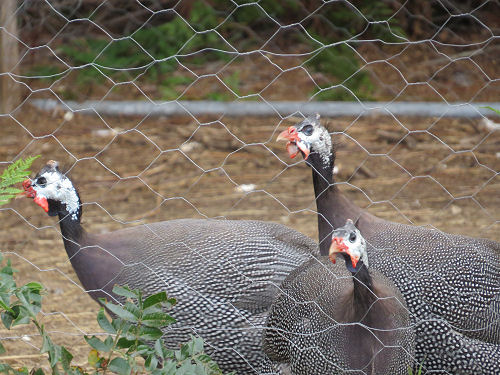 I should have made a video, with sound. They make a noise like a thousand squeaky gates and run around bobbing their heads as if they can't decide whether you are a threat or a possible source of food. 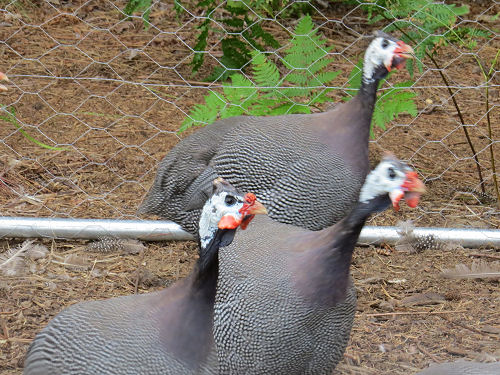 Here's a plus. I just learned they eat ticks. Lots of ticks.

Not the first time I've seen them, but I don't see them often enough to get used to.

By the way, some blog I used to read regularly talked about getting Sebastopol geese- the ones with the fancy feathers. I saw one of those too! If you are still stopping by here, remind me who you are and leave a link.


Out doing assignments today. One property had six outbuildings, all in disrepair. That makes for a lot of work for me taking and processing and labeling pictures. The insurance company only sees a broken window frame and peeling paint. But my "other" set of eyes liked this picture a lot. What do you see? 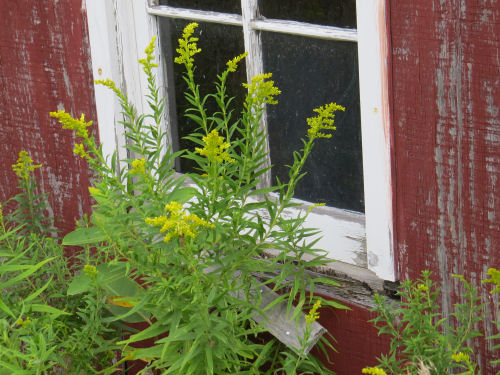 Off for a night of work very soon.


Or, White-lined sphinx moth, hawk moth, Sphingidae. To be specific Hyles lineata, one of the most common of the sphinx moths.

Actually, I just wanted to show you some chicory because I love the shade of blue, but something flew into my picture. 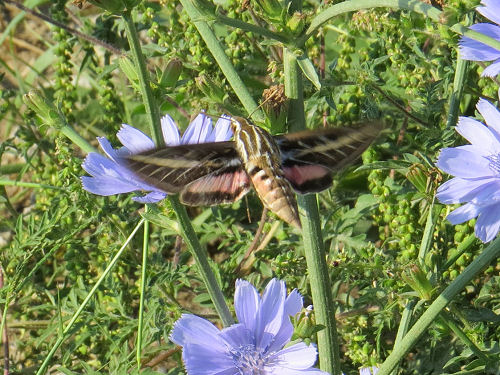 These moths are large, and they flit and hover, so they are sometimes mistaken for hummingbirds. Here's a side view. Hard to catch the wings as anything but a blur. 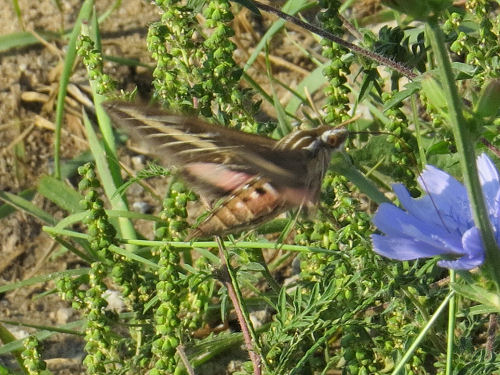 They also fly during the day, unlike most moths. It stayed at each blossom for about two seconds, taking sips. See the proboscis? 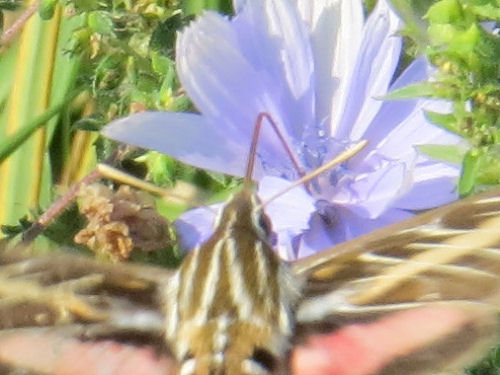 The Greek name, Hyles, was the name of a centaur warrior, and lineata just means lined. So we have a fierce-looking moth with lines. Not too difficult!

The caterpillars are fairly large and usually green with lines of spots.

Email ThisBlogThis!Share to TwitterShare to FacebookShare to Pinterest
Labels: insects


This should have been yesterday, but we've never been too fussy about the date. Om left me a message on the fridge. Pretty cute for an old guy who struggles to locate his sense of humor, eh? 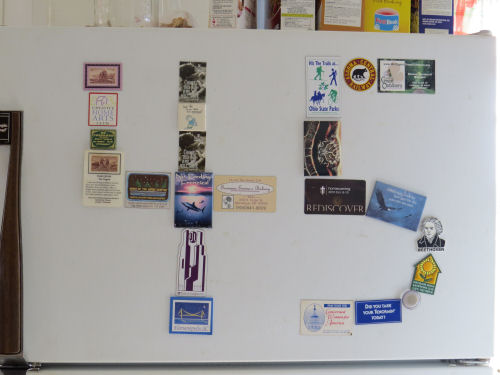 
This is one of the things I've been wanting to share. Since today was a quiet day of writing with no new pictures, it's a good day for them.

Lowell (Michigan) high school students recently painted a series of murals which have been mounted on the outside wall of the headquarters building. I like the story they tell. 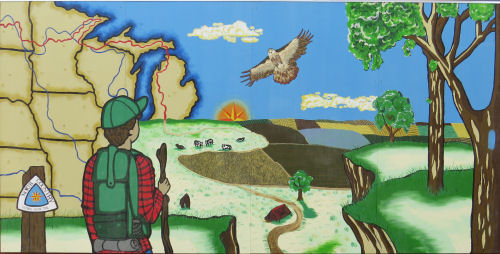 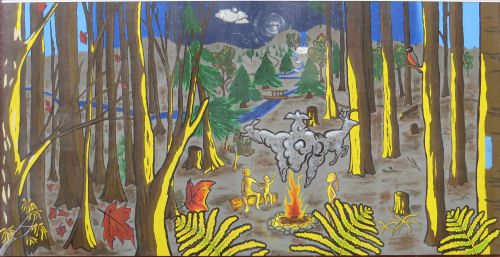 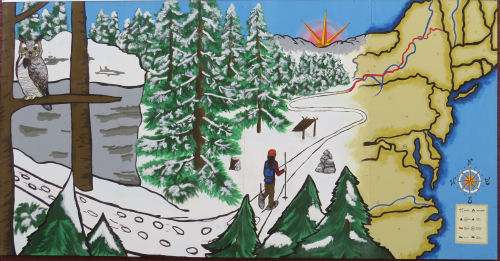 Back out on assignments tomorrow. 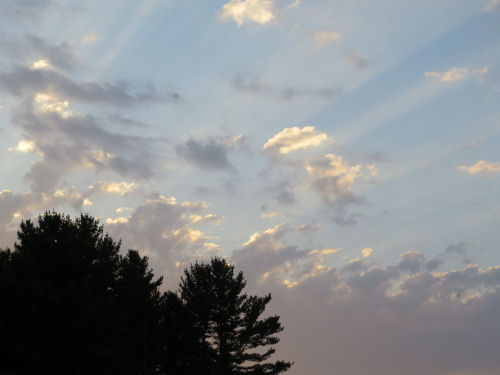 Return to Paris on Two Wheels


Om and I managed to plan a bike ride today. We continued south from where we left off last June on the White Pine Trail.

We began at Reed City and rode to Big Rapids and back for a total of 25 miles. Interestingly enough, the midpoint was through the small town of Paris where I "took you" in January 2012.

There is more to Paris than met my eye on the highway. There's a large and family-friendly county park there. The trail goes right through it. It's also the site of a former state fish hatchery, and the old ponds have been incorporated into the design of the park. 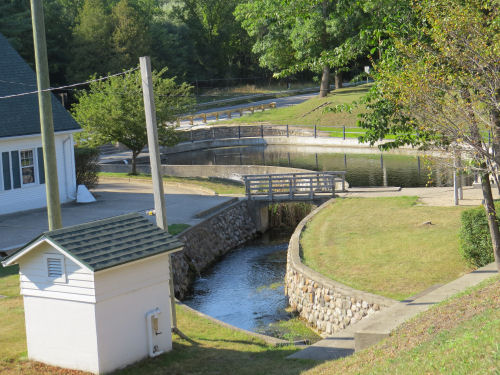 This section of the trail was a lot prettier than the last one. There are quite a few pieces that are nicely wooded. All second growth, of course, since it's a former railroad line. The pieces with trees are very appealing, and the shade is really nice. I didn't tell Om to wear a red shirt, but it makes a good picture. 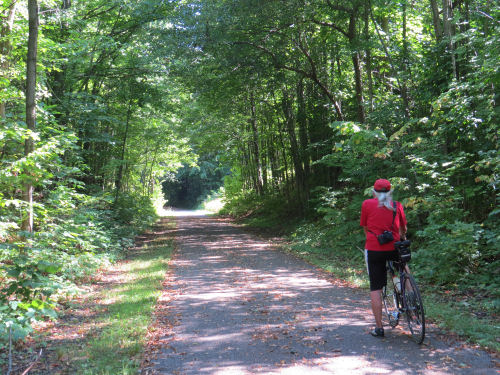 When we reached Big Rapids the trailhead is out of the main part of town. Big Rapids is a college town (Ferris State), and decent size, but you'd never know it from the trailhead. That's also because of it being a rail trail. They go where the railroad went- usually through the industrial sections. The old depot is still standing, but in need of serious work. However, damaged sections were carefully boarded up, as if someone is trying to keep the weather and vandals out, so maybe there are plans for it.

Omer contemplated the information on the kiosk for a while. 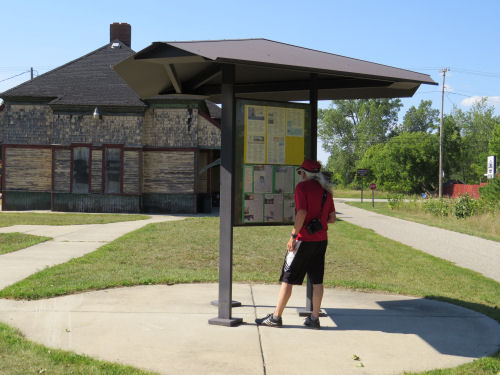 We were hoping to eat at Pere Marquette Catering Company in Reed City when we got back there, but they were closed. Instead we grabbed a sandwich at a sports bar. The food was good, but it was seriously noisy. A wedding party was celebrating, and the bartender actually finally told them to tone it down a notch. I was going to be good and eat light, but the patty melt sounded so good, I gave in. And it was served with homemade potato chips!

Another great bike ride! (And I'll be using these trips on the White Pine Trail for my monthly newspaper column this month, so it was a research trip too.)


At the conference last week, most people stayed on campus at Slippery Rock University. But Marie and I chose a less expensive option. It's one of my favorite places. The North Country Trail Association has two buildings along its length. NCTA doesn't really want to be in the business of dealing with buildings but the two are pretty special.

One of them you've seen at Great Lakes Hikes Gathering.

The other is in Pennsylvania, and the NCTA leases it from the state for a dollar a year. In return, we restored/renovated it and run it as a hostel/rental.

I'm talking about the Davis Hollow Cabin. The log portion was built in the late 1700s and the stone addition in 1901. 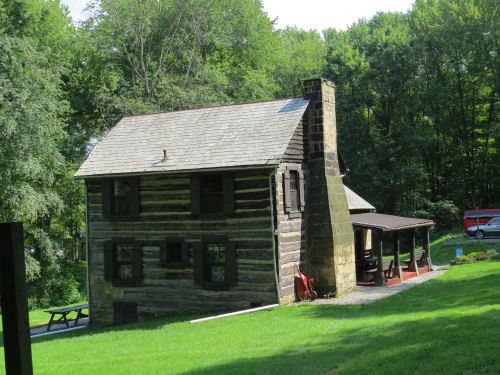 The upstairs has two bunkrooms. There are bathrooms and a kitchen, but you do have to walk down to the marina on Lake Arthur to shower. Consequently, it's very reasonable to stay there. Plenty of amenities for us!

I love the living room. It's the full two stories high. I didn't manage to take a nice overview picture this time, but I did get a shot the chilliest night when the guys lit a fire. 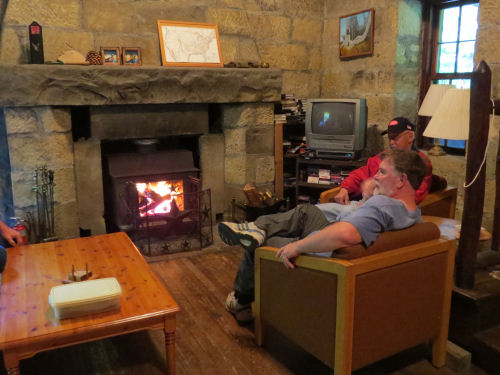 We really had it made out there. It was far enough off campus that we had to allow for a bit under 30 minutes of driving time to get the the day's activities, but it was worth it. We had taken our own food (choosing only to pay for the two dinners that had attached programs on Friday and Saturday). But we were fed several nights by people who were there and pooling food resources. We chipped in, but we definitely got the better deal.

The cabin is about a minute's walk off the main North Country Trail, so it's close enough that even backpackers are willing to leave the trail to stay there.

Birds of the Day at Lake Arthur


These birds of the day aren't today. They aren't even Michigan. They were taken last Friday in Pennsylvania on Lake Arthur at the heart of Moraine State Park. The lake is large, man-made, and purely for recreation. It filled in 1969. 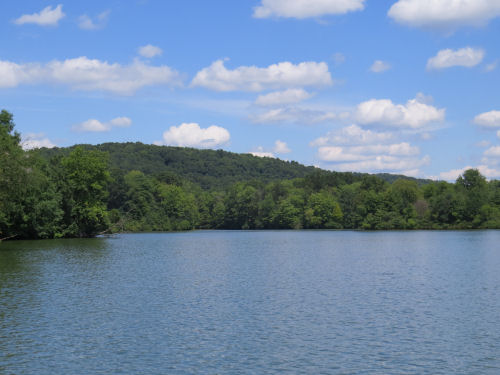 We took a boat tour- pontoon boat- no exercise at all. But it was very restful, and the lady who told us about the area was interesting and funny without using really stupid jokes like some tour guides seem to feel are obligatory. 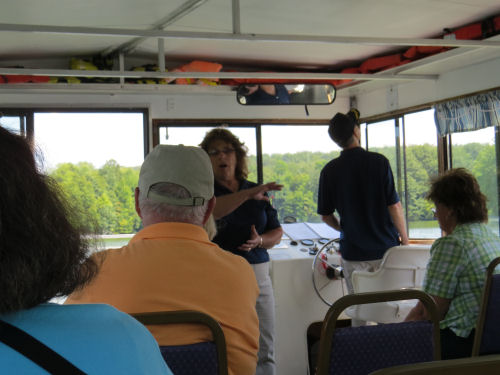 The best sightings were some large birds. I like blue herons, of course, but we have so many here that I didn't feel obliged to take pictures. I did, however, snap these two. This bald eagle decided to give us the classic pose. 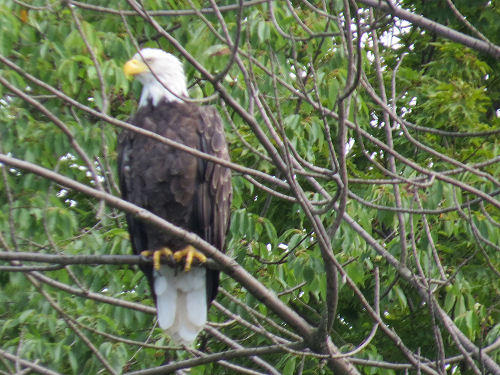 The very best, for me, was the osprey. Pennsylvania erects nesting platforms in many locations. It seems like I always see ospreys when we hike there. We have them here, but the platforms really put them on display, and the birds seem to like the accommodations a lot. 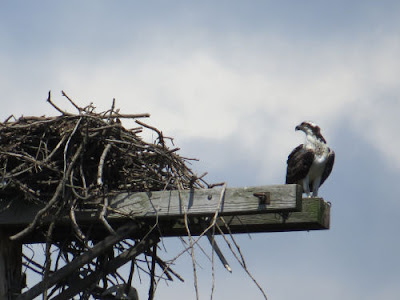 The very best picture, without a doubt is the osprey coming in for a landing. 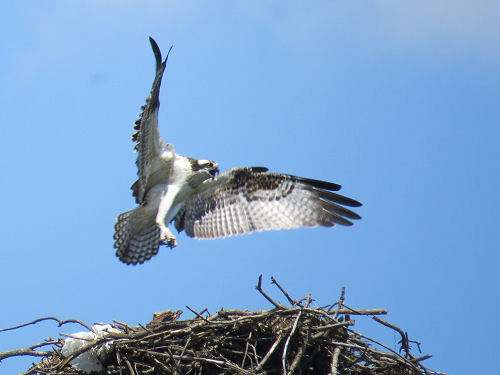 I have to confess to being slightly under-enthused about getting back into harness here at home. Sigh.


I plan to still share some more from Pennsylvania, but I have to show you who I met tonight. I drove to Muskegon where Jennifer Pharr Davis was speaking. 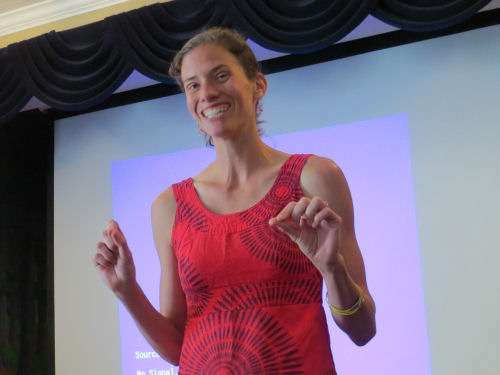 Jen has several books out or about her (I've read two, and after tonightI have a third), and also now she has added a little potential hiker to the world with husband, Brew. The little one is Charlotte, aka "Charlie." She's still on all fours, but it won't be long till she'll be hiking too. 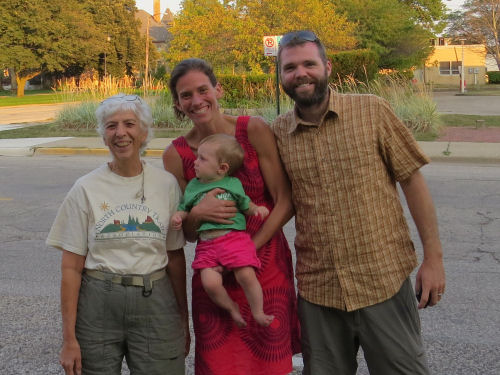 Email ThisBlogThis!Share to TwitterShare to FacebookShare to Pinterest
Labels: hikers


I am home from Pennsylvania, and spent the night last night with two of my favorite people, Chuck and Sylvia of Secondary Roads.

One of their favorite things to do is manage a garden each summer, and the amount of produce they produce (nice heteronyms) is amazing. 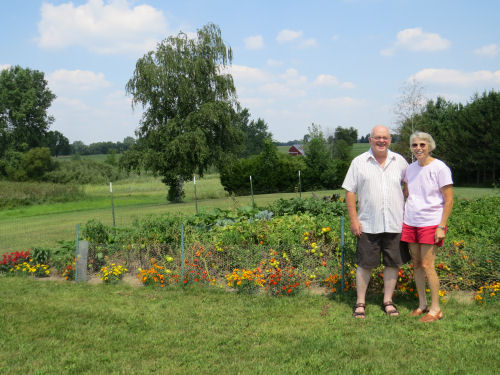 I love Swiss chard- to eat, to smell, to look at. My contribution to the day was to help pick some of the bounty and provide directions (via friend Irene) for the best way to blanch and freeze the chard. 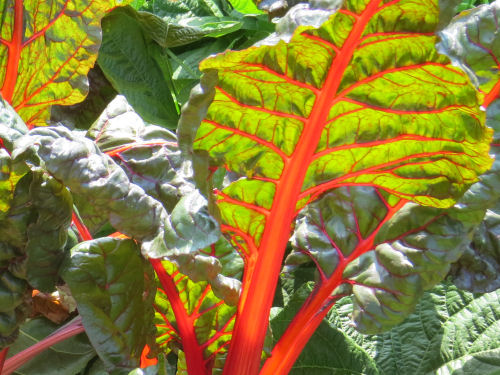 You don't need to plant a lot of cabbages when they grow to this size! You can see more about the cabbage at House Guest (which beats the heck out of being a barn guest- just kidding, Chuck). By the way, if you go there, look carefully at the second picture and you will discover that this was indeed the 2013 meeting of the Blog-Posting Murderers Fest, as Sylvia is slinking in from the right with a sharp knife. 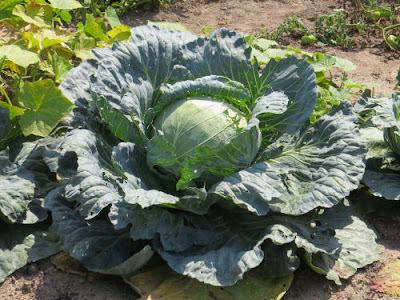 The edge of the garden has to have marigolds to help hold the insects and the bunnies at bay. It's not shabby that they look great, too. 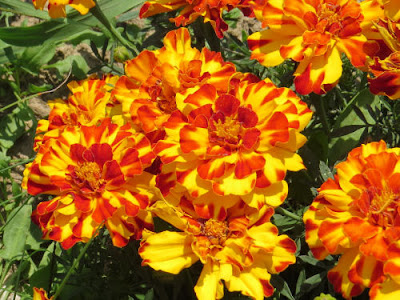 After Sylvia and I picked a number of things, we divided them up, and look at all the goodness they sent home with me. I won't have to buy food for a week or more. 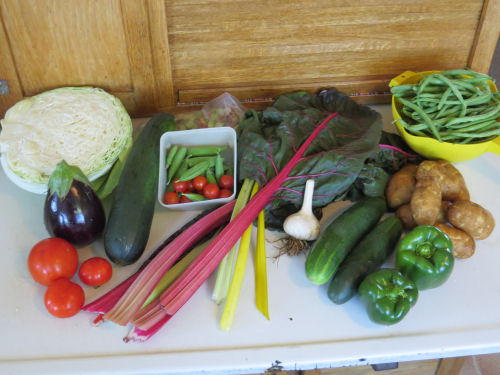 Thank you, Chuck and Sylvia. You are some of my favorite people, and I would say that whether you give me veggies or not!