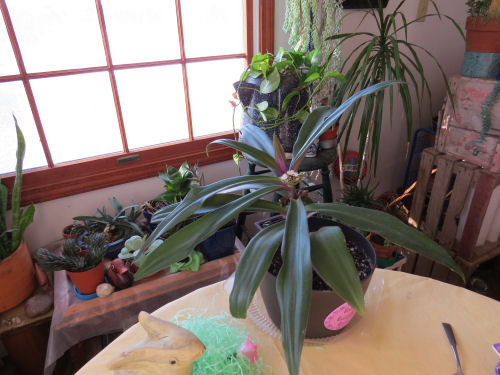 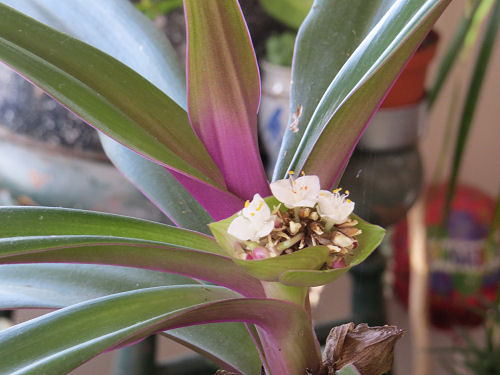 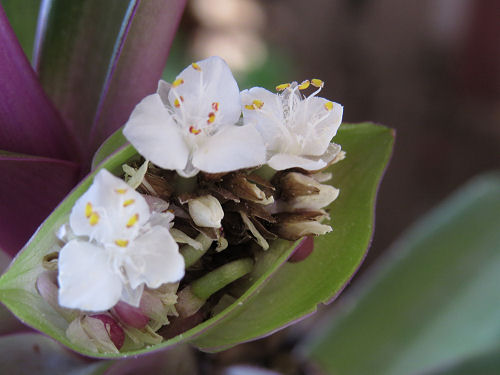 
Wonderful walk today. The temperature was in the 50s and the sun was shining. I walked about seven miles. I saw and heard red-wing blackbirds, and heard the first frogs of the year. In one lawn there were three chickens, all reddish with some gray feathers, strutting around hunting for a snack. In the very next lawn were three robins with their red breast and gray backs, strutting around hunting for a snack. It was as if the chickens suddenly shrank and became smooth and neat!

Of course I picked up empty cans. In Michigan, they are worth a dime apiece if they aren't smashed. Even if they are flat or too damaged, the aluminum can be sold for scrap. I came home with a whole garbage bag! 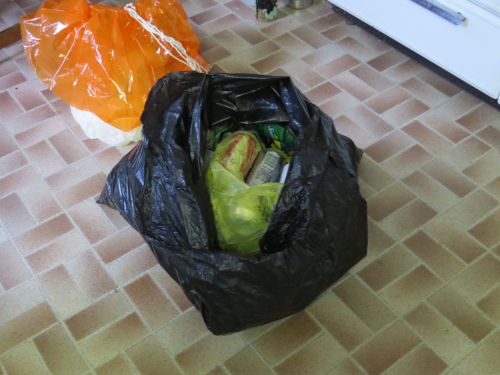 But, the best find of the day was in the morning. We walked out back and almost immediately noticed a piece of orange plastic caught in some shrubs. 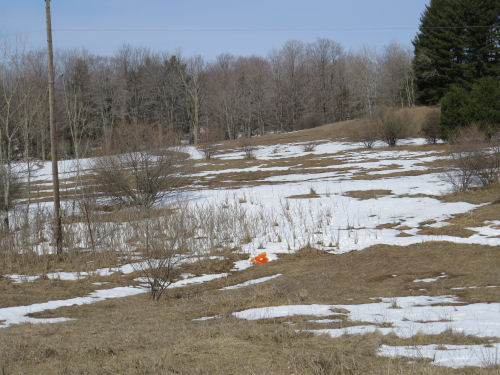 We walked closer, and it looked like an orange parachute with a wad of white fabric underneath it. 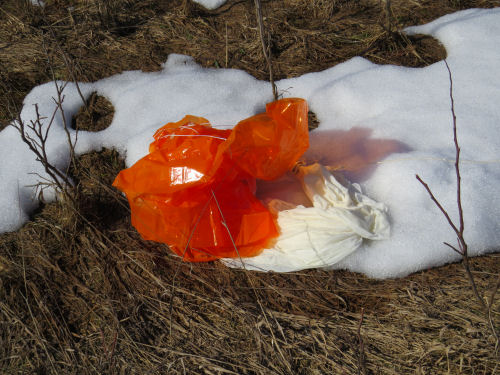 The white stuff wasn't fabric at all, but heavy white latex. I followed the squiggly string attached to it. 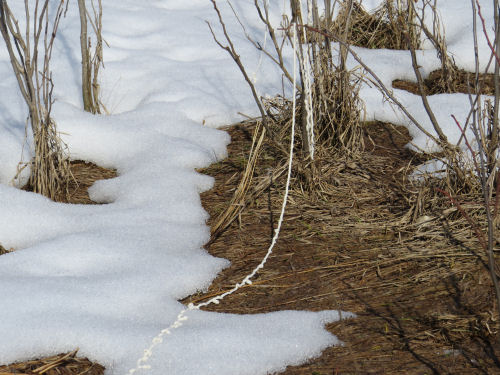 At the other end we found a small carton. 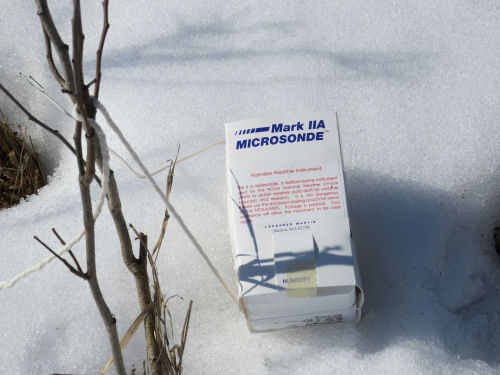 It's a weather balloon! There is a postage-paid mailer inside and a message about how it's not dangerous, but to please return it for research purposes. I've always wanted to be the finder of one of these, and now one came down in my own back yard! I only wish I might have seen it drift in.

Email ThisBlogThis!Share to TwitterShare to FacebookShare to Pinterest
Labels: recycling

Buttons, We Have Lots and Lots of Buttons


I have yet to determine when one gets enough seniority to do much of anything at work, but it definitely can be measured in the number of buttons you might be allowed to push. Meet some buttons.

The big red one is the first button everyone becomes acquainted with. It's the STOP button. Every station has one. If anyone in the room yells "STOP" anyone who is anywhere near a button hits it. The point is, shut the machine down NOW. Some paper jams shut down automatically, but a lot of problems don't, so we all get really comfortable with the STOP button.

The toggle switch with the arrow is a feeder switch. I'm now trusted to turn the feeder switches on and off when told, and sometimes the detector switches. This station doesn't have one, but they are usually in the slot that is empty on this station.

You don't see any arrows to those buttons. That's because I haven't been allowed to touch any of those yet. The green button starts the whole machine. The counter (at 0 in this picture) shows how many papers per minute are being stuffed when its running. We generally run between 60-75. Of course, that's only when the machine is actually on.

This is the main power switch for the whole machine. It actually turns off all the motors with one pull. I've been instructed to pull it twice. No one pulls that unless the big boss says so!

Today, I got to push a new button! I like it. It's the green one.

My real goal? To be allowed to drive the forklift. I've learned that one other girl is allowed, so there is hope for me. There's a lot of gender bias in general.


We finally had a sunny day today. This clump of trees looked so red, I had to stop and see what they were. It's a speckled alder, Alnus rugosa. I'm familiar with it, but don't recall the catkins looking so red. 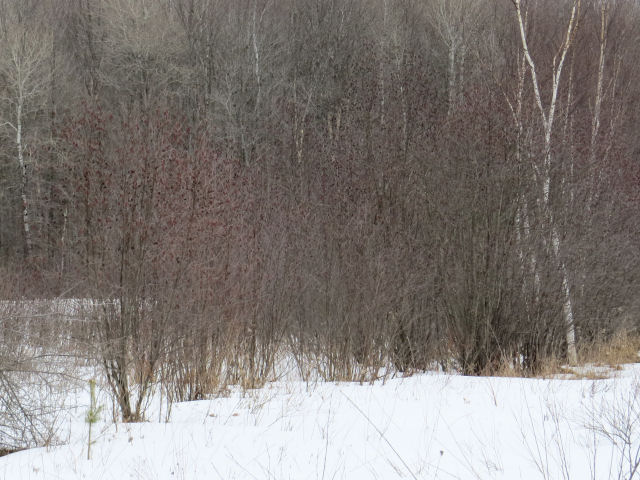 It grows in clumps, usually in the sun. It doesn't like shade. 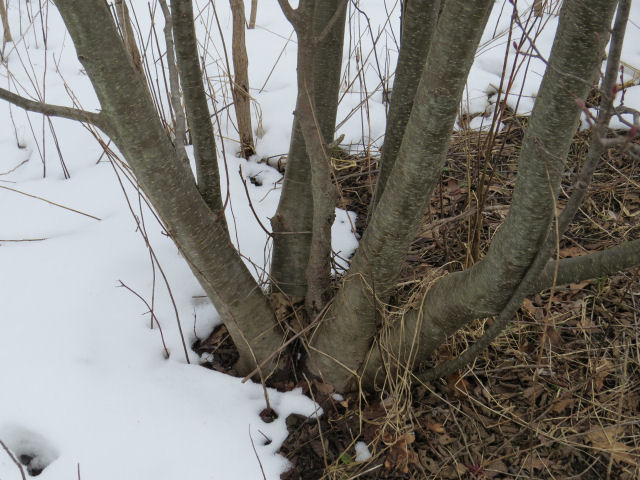 It gets the name "speckled" from the light-colored lenticels on the bark. 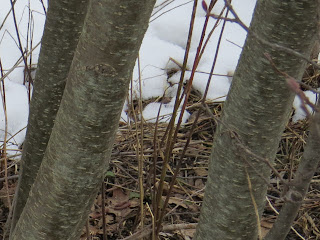 It must just be the timing. The male catkins (the long skinny ones) are very red! The small "pine cone" shaped structures higher on the twig are the female flowers. 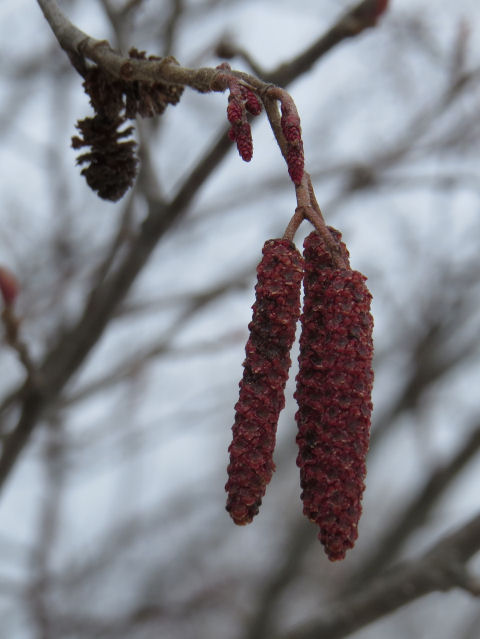 They like to grow in damp areas, but will also grow where it is drier.


Since Om and I don't get our act together to eat together very often, that's my quality event of the day. Nothing fancy- fish, potatoes, green beans, and some low-everything chocolate pudding that tastes amazingly good anyway. We found the recipe after he had his heart attack five years ago. 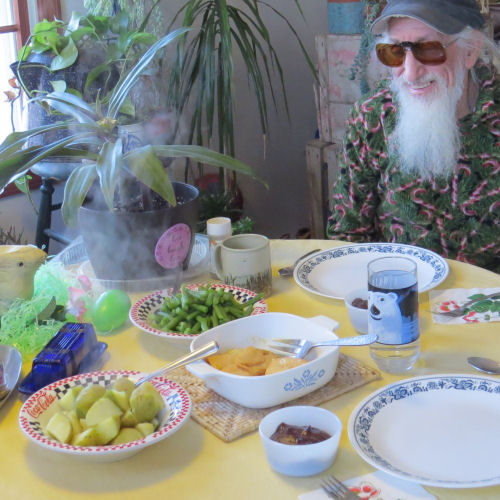 
This is one of our most common mammals, the raccoon, Procyon lotor. They are most often seen dead in the road (sorry about that). They are mostly, although not exclusively, nocturnal. Raccoons are extremely smart, and have dextrous front paws. Anyone who has tried to keep them out of garbage cans knows all about that! Their American cousins are animals like coatis, kinkajous, and ringtails. The raccoon is the only one in North America. It's easily recognizable with its black mask and striped tail. 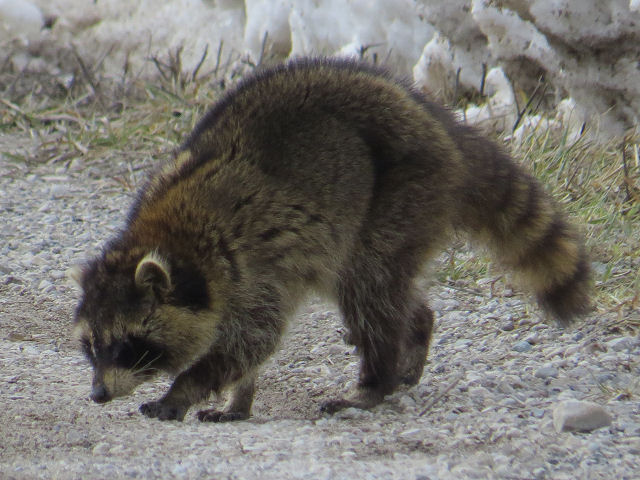 This one was exploring the dirt road. I'm not sure what it was finding, but it kept walking back and forth. They are very curious. 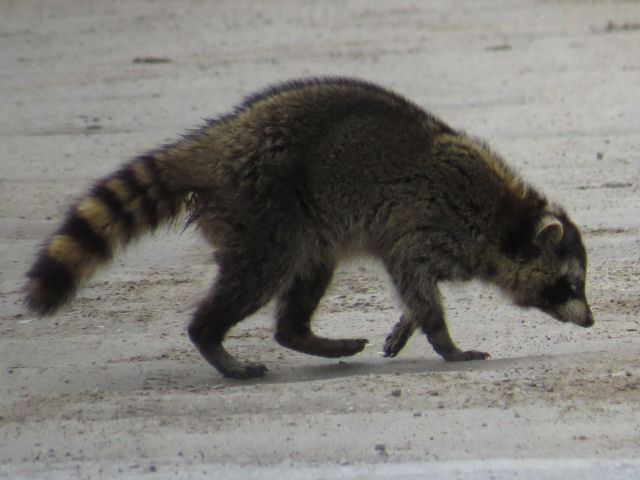 Raccoons walk on the soles of their feet, like humans and bears. It's easy to see in these two pictures. That means they have good balance to stand on their hind legs. I just learned that the word for walking on the sole of the foot is plantigrade. 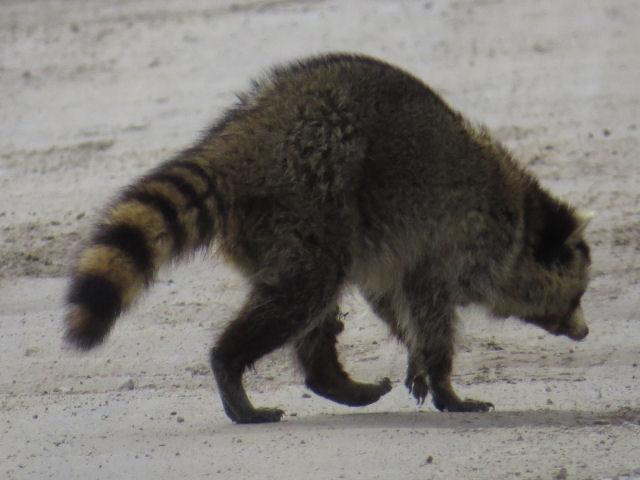 They can't run very fast, and always look awkward to me. Just an interesting rear view. 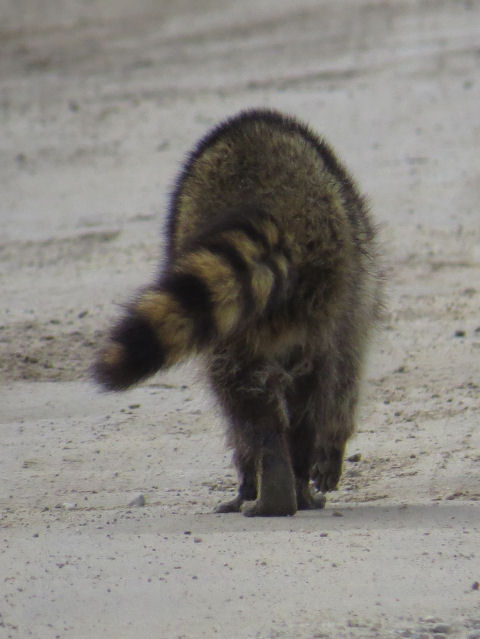 And the rabbit? Did you find it in yesterday's puzzle? I only saw it because the next thing it did was hop away! 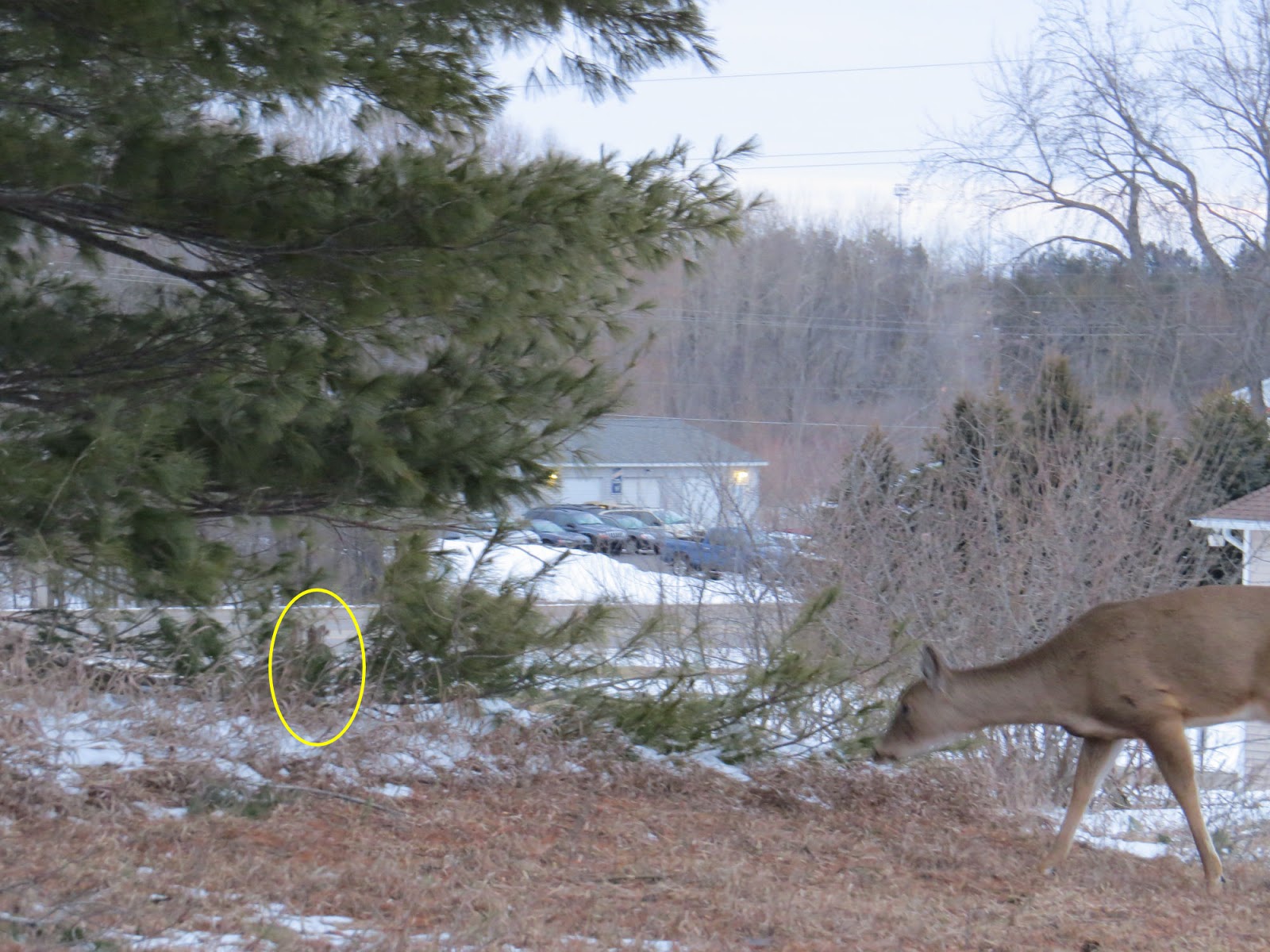 
There is a patch of bare grass outside my kitchen window. The rest of "my kingdom" is snow-covered. That bare patch has been highly popular with the locals today.

"Hey, who are you looking at? This is my spot." 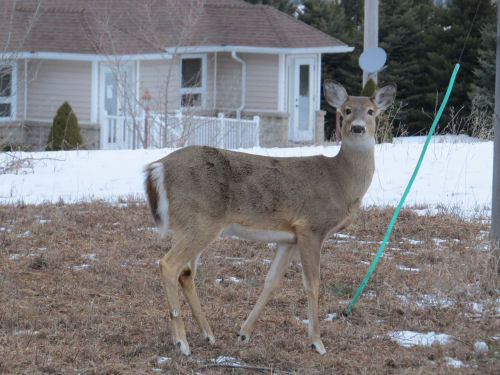 This one is a puzzle. You can click it to make it larger. There is a second mammal in this picture. Can you find it? 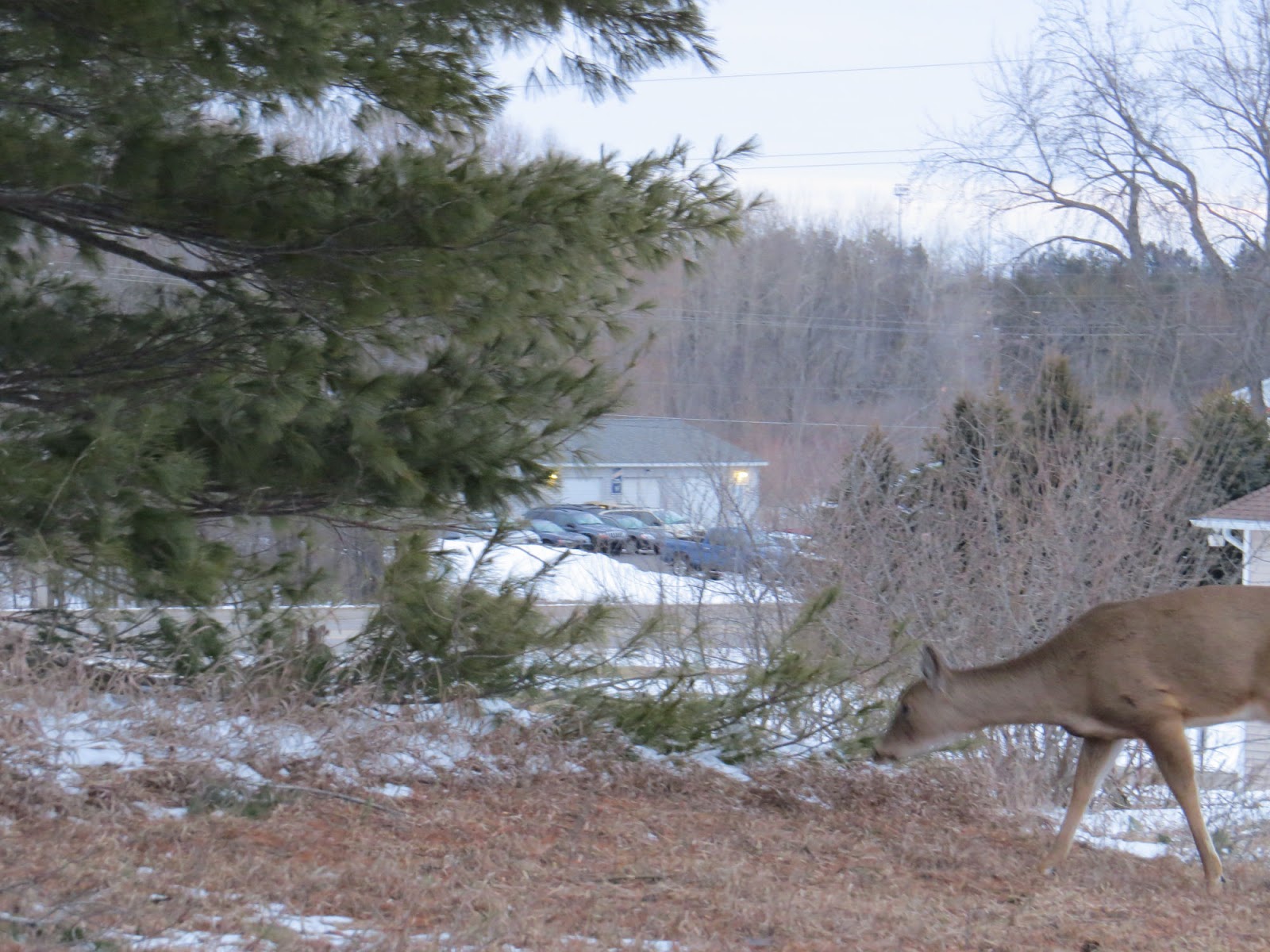 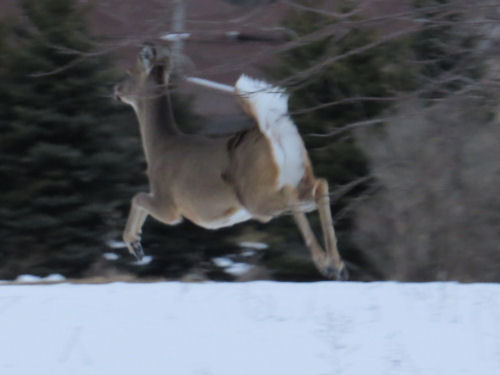 "I'm Handsome and I Know It"


One of my favorite birds is the ring-necked pheasant. They aren't native to the US, but were introduced for hunting so many years ago (in the 1800s), that they are completely naturalized.

The males are extremely showy, and the females have a more subtle beauty. Actually, "ring-necked" is applied to a lot of subspecies as well. This species seems to be "Common Pheasant," Phasianus colchicus.

This particular one sure is strutting his stuff! 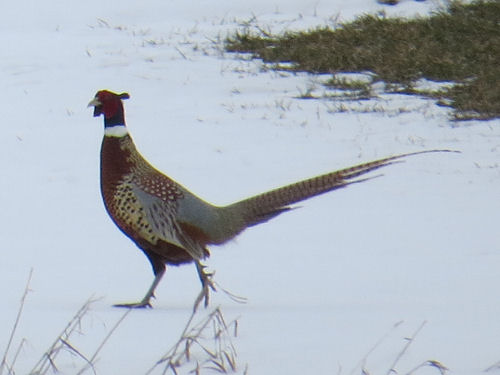 You can see a female at Hen Pheasant.

Beauty in the Most Drab Places


March is not my favorite month. In fact, it's on the bottom of the dozen. Even so, on a walk today I saw lace in the most unlikely places. First, a rotting snowbank. 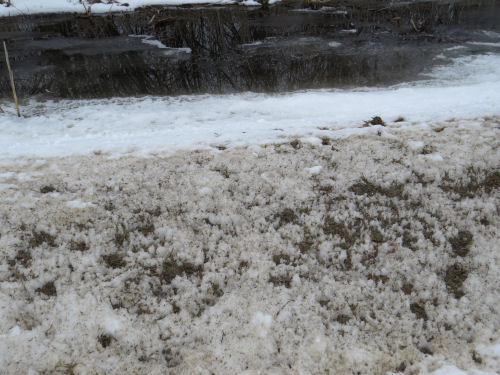 But a lacy landscape in close. 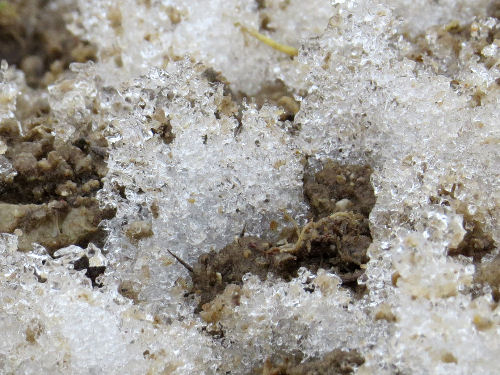 Even less likely is this clod of frozen mud. 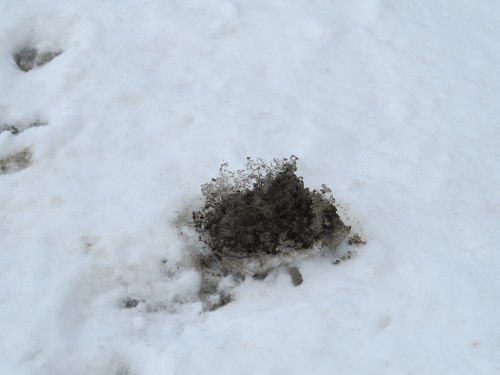 But it's the most beautiful! 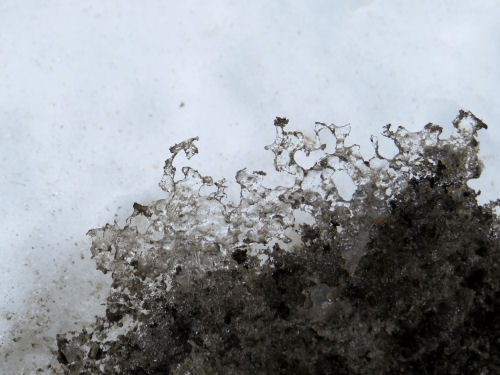 I think I'm ready for some spring-like views.


This is not your grocery store Kalanchoe. I like this one a whole lot. It's Kalanchoe Rhombopilosa, common name Pies From Heaven. I'd never heard of it. It comes from Madagascar. This one is going on my wish list. 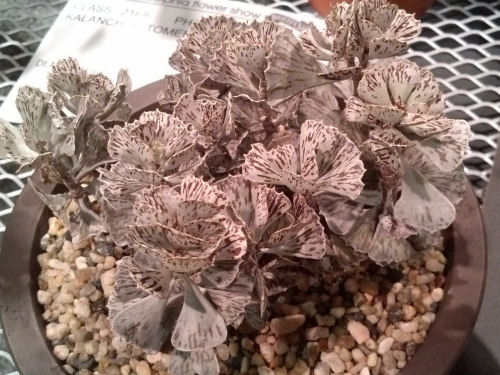 You can see a picture of the Kalanchoe Rhombopilosa blossom