Well, there seem to be just two little ones. They sometimes share and sometimes chase and bite each other. 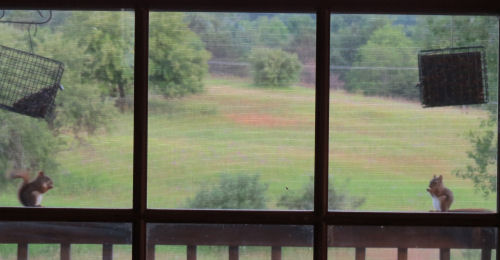 What am I gonna do?

Green Garb with a Redbelt


Just a few pictures I took walking the trail around the West Shore Community College pond. We have made it to full summer, and the color of note is green. For sure. 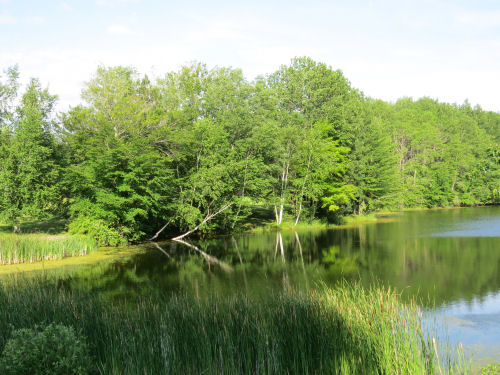 Even if you make it dramatic, it's still green. 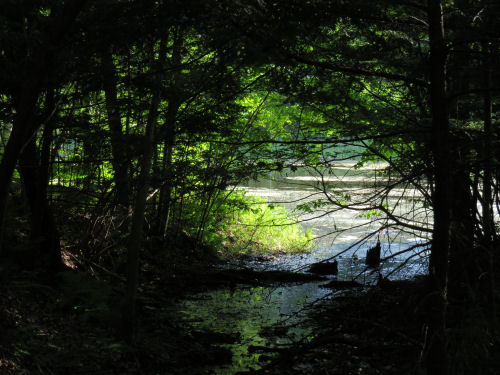 How about a red belt to go with that? Redbelt polypore (I'm pretty sure, although I'm open to correction on this), Fomitopsis pinacola. It's a little thinner than I would expect, and it must be young since the color is all redish. Older ones are thick, like a hoof, and are brown with just a red belt at the edge before the white strip. 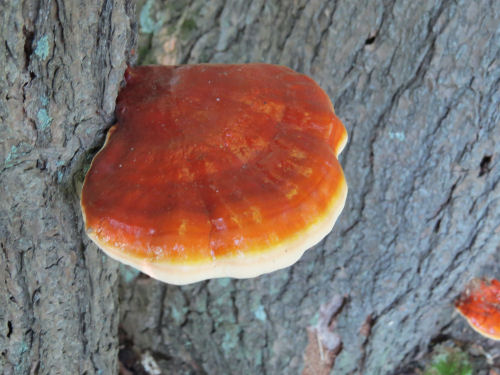 But the underside is easily identified as a polypore... no gills, just a more or less smooth surface covered with tiny pores. 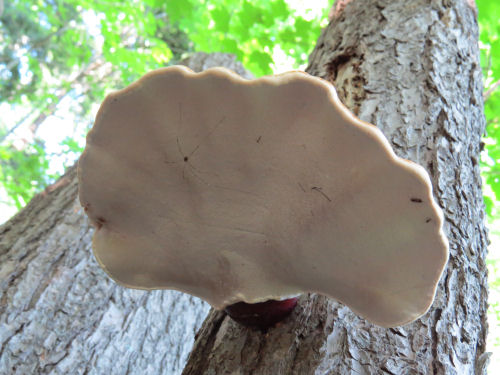 Maybe if it works hard it can be a black belt.


A friend of mine, who's in my writer group, had a book launch party this evening. She's Elizabeth M. Rosenow, Betsy. Here is her book of poems about country life, Sandhill Mist, Seasons on a Centennial Farm. 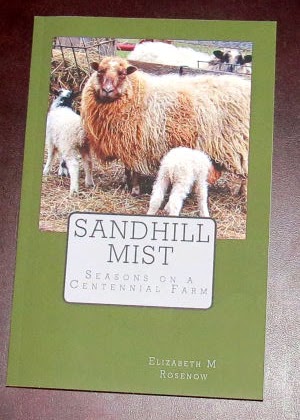 Some other members of the group, one of them my friend Ellen, organized the event. Betsy read poems from the book for about 30 minutes. 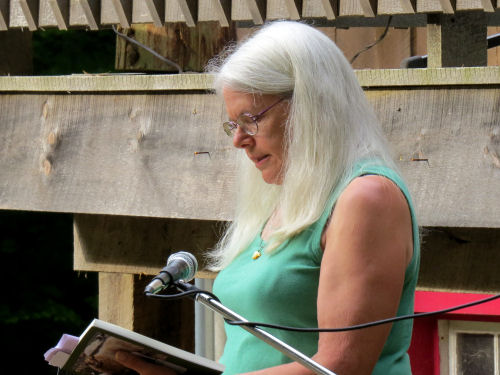 If you enjoy seasons, farms and life close to nature you'll like Betsy's work.

The party was held at the Shagway Arts Barn, a fairly new venture, out near Indian Pete Bayou on Hamlin Lake. They sell local handmade art and craft items. Lovely display, nice setting. They even have some hiking trails that I need to go explore. 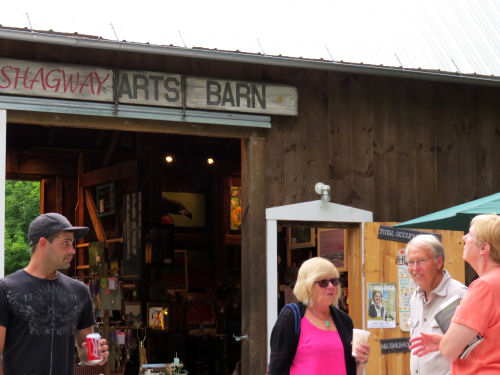 The evening began with live music by Cheryl Wolfram- a fitting collection of songs for the occasion. 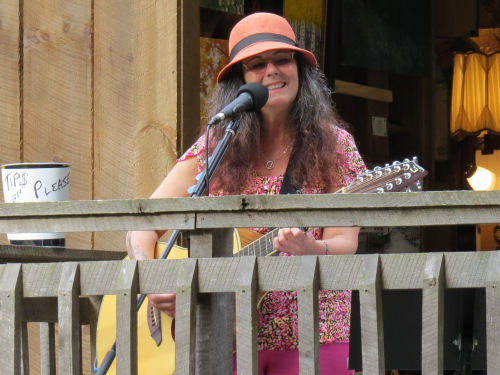 After that, Betsy read, and then we all had cake! The cake was decorated with sheep. Why? you ask. Betsy is the friend who has the Icelandic Sheep.

About 30 people attended, a nice turnout for a first book by a local artist. 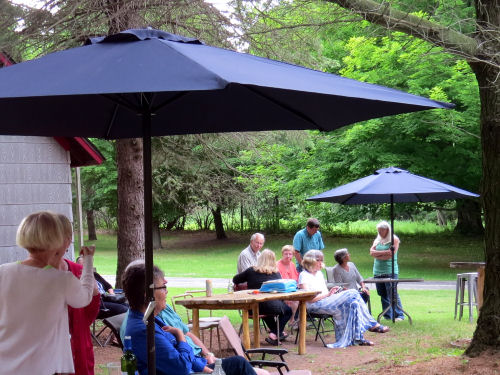 She sold a number of books, and we all congratulated her. Way to go, Betsy! You can find Sandhill Mist on Amazon. You won't be disappointed.

It's a Perfect Match


I managed to catch a monarch butterfly on a milkweed plant, required in their life cycle. It's even at a little different angle from most butterfly pictures. 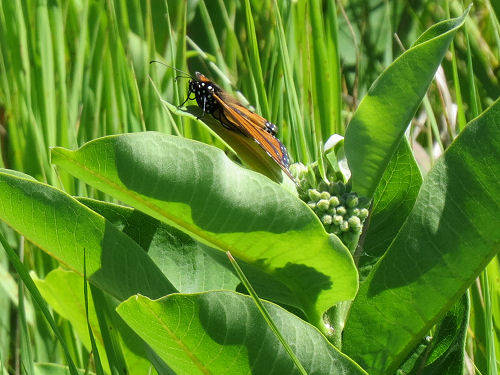 It was another beautiful day. A little hot, but the evening was cool.


I was out doing assignments all afternoon, and then had to go out in the evening again. It was one of those perfect summer days... warm with a light breeze that kept it from getting too hot.

I was out in real farm country... acres and acres of fields and orchards. Red barns, big trees shading lawns. 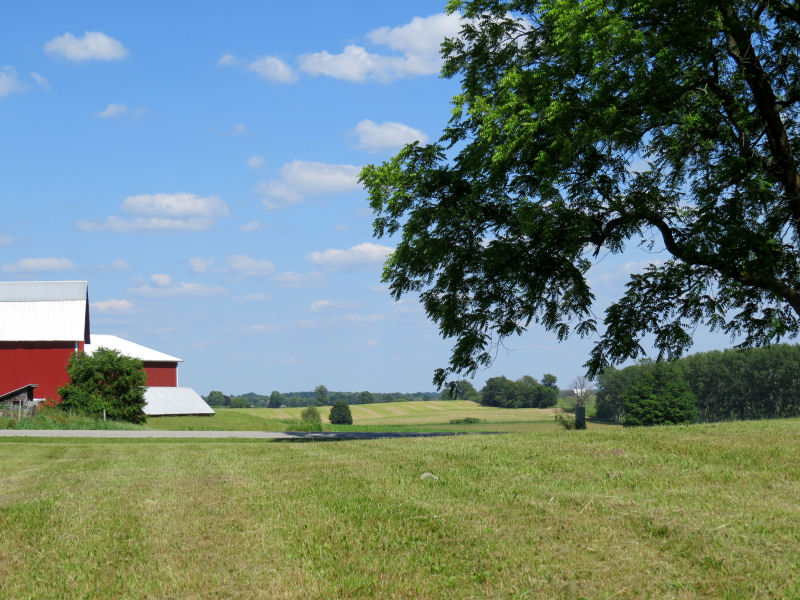 The wheat isn't quite amber yet, but it sure was waving. 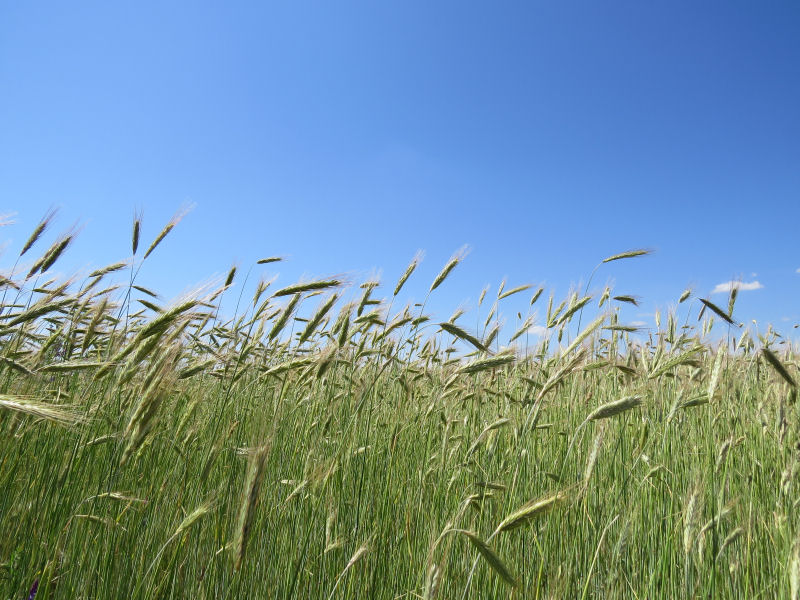 Coming home across Longbridge...Pentwater in the sunset. I caught a big bird in the shot. 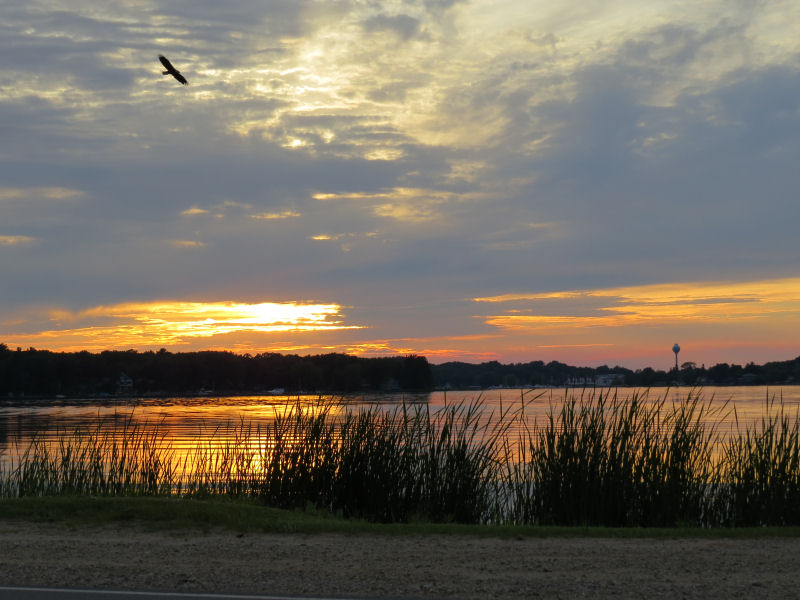 Then I looked to see what it was... Sure enough. An eagle! He scooped up a fish and flew away. 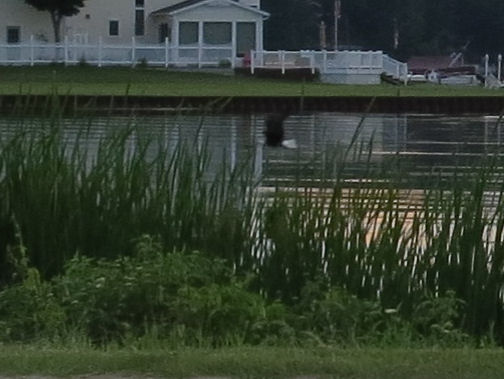 
I promised you'd eventually see the horses who lived at the farm by our campsite in Ohio. Here you go. Jen is the one in back. She's a Belgian. Nick was purchased so Jen would have a friend. He's a Haflinger gelding. Although that breed is always some shade of chestnut, Theresa and Ron looked specifically for a horse that would make a nice match for Jen.

Haflingers were developed in Austria and Italy, and take their name from the city of Hafling. They are a small draft horse, often used in military operations because of their strength and endurance. 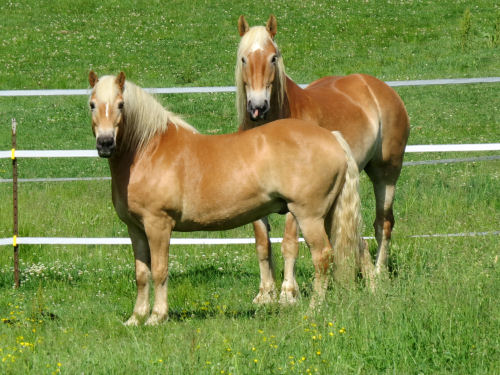 Theresa said they don't harness them together because of their size difference, but separately they can pull a cart. Both are also saddle broken. She said they are great pals and don't like to be separated.

While we were there, Ron brought in a cart of fresh hay and Nick and Jen were running along the fence and whinnying like crazy because of the enticing smells. 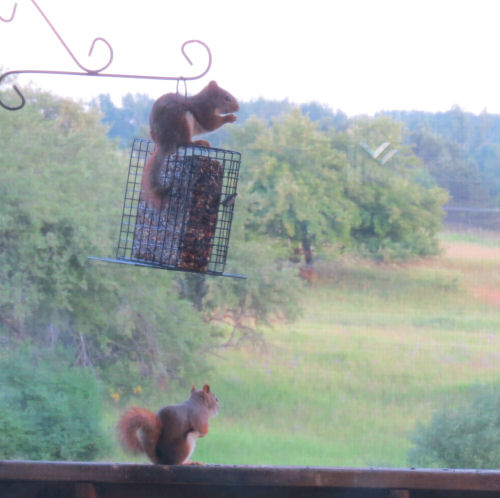 
Tonight I attended the West Shore Community College production of South Pacific. It is also the final play directed there by Rick Plummer, in his role as a professor. And what a grand finale!

It was creatively staged, with the orchestra in the center, on stage. Around the edges were small areas of scenery and settings where actors created ambiance while not, literally, "in the spotlight."

The weakest area of local productions is usually the music. Not this time. Quality musicians from across West Michigan came together to fill out the orchestra. They were seriously good. Like the Broadway musical recording good.

Here you can see the orchestra surrounded by cast members. The posters advertised this as South Pacific in Concert, and I think that's because the emphasis was on the music rather than creating a realistic set. Actually, Hollywood tried to be realistic with the original movie, and it looks pretty silly by today's standards. Like many early musicals, the plot is thin, but plots were always secondary to the music. 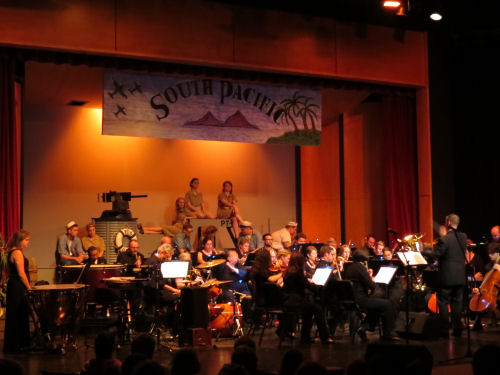 Emil and Nellie soliloquize about what life could be like together on this South Sea island. The only thing distracting about the show was the use of stand mics. I got used to it, but it seemed odd in this day and age of those nearly invisible mics actors can wear. 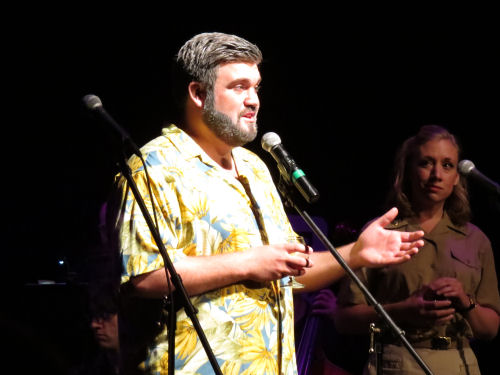 Of course, one of the most fun songs is "There is Nothing Like a Dame." 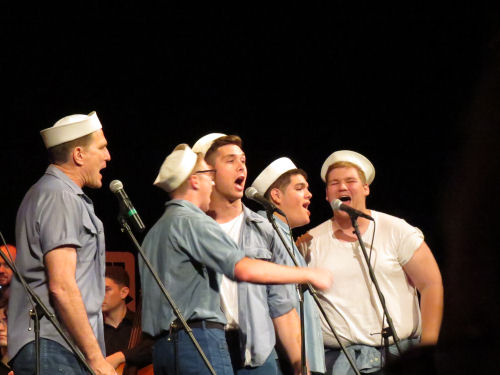 And who doesn't get that sense of longing when Bloody Mary sings "Bali H'ai?" 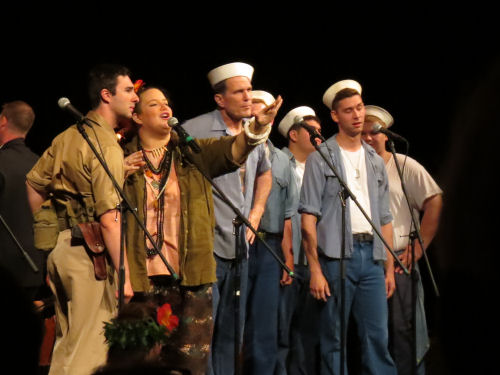 While Lt. Cable and Emil are gone to another island trying to scout Japanese positions, Nellie organizes a show for the troops. Honey Bun never fails to have everyone in stitches. 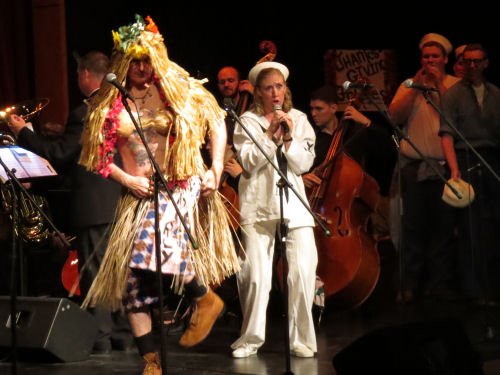 They receive news of Cable's death, no one is sure if Emil will make it back. 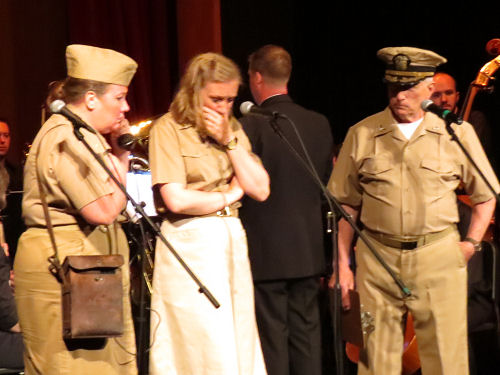 He does, and is reunited with Nellie. 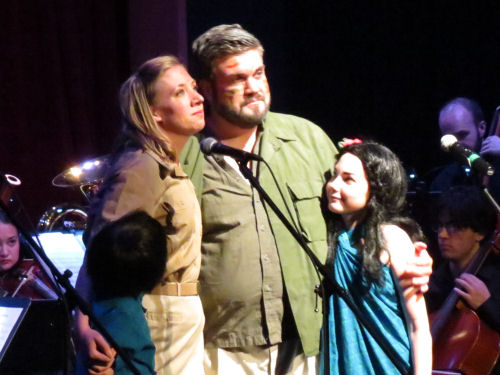 Sometimes It Comes To You


One of the big challenges of urban and suburban, or even farm country, hikes is that of finding places to pop into the woods to, well... find a tree, see a man about a dog, visit the head... whatever you call it. Pee or poo will do.

But some days you get lucky and they bring the porta potty right to you. 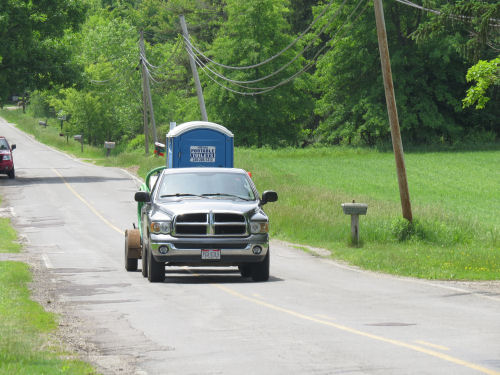 Just kidding. He didn't even stop for us. Someone else got lucky.


Just because we were hiking in well-populated areas didn't mean a lack of wildlife. Perhaps we saw more than people who whiz past in cars. I know they didn't see these beauties. The creek is well below bridge level and the deer had a nice little watering hole all to themselves in the midst of an area filled with busy traffic. 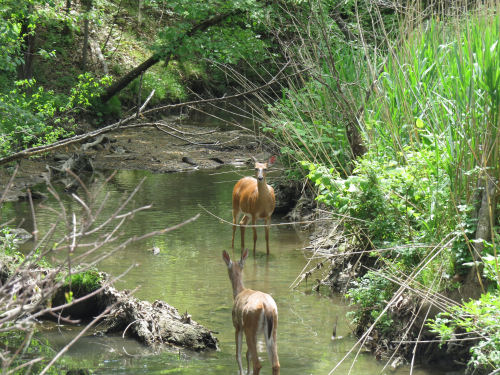 We saw quite a few great blue herons. They have become commonplace, but are still such great birds to watch. Here's a shot from a different angle than the usual side silhouette. 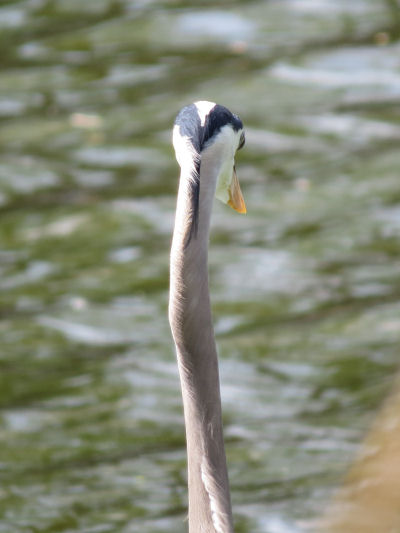 Another sad story in the road. This is a little garter snake, dead. His color pattern is a little bit unusual with the light reddish-brown and the darker spots, making him look somewhat checkered. I hate seeing snakes dead in the road. 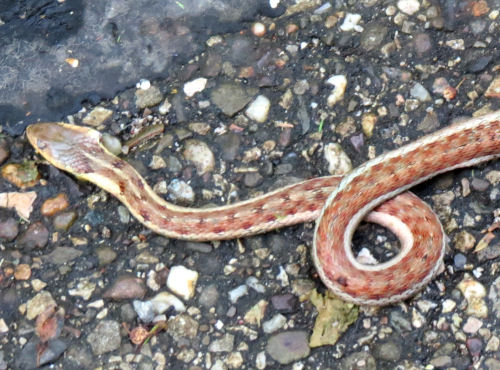 All too common are the Canada geese. Not my favorite bird. But who can resist such a classic picture with babies? 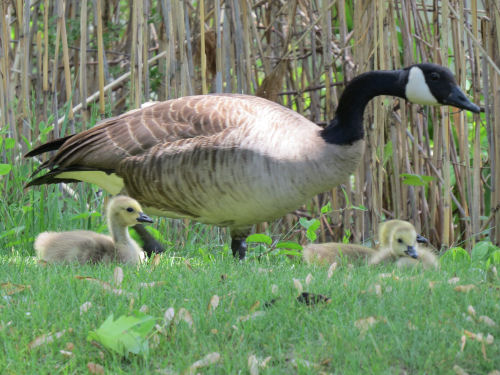 And finally, a rather unusual sighting. Rare for Ohio. A koala. 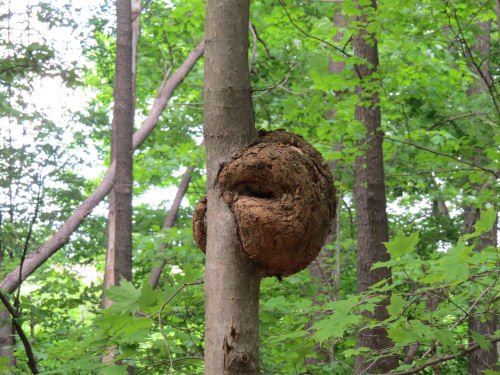