One of my assignment houses today was built just about the same time as the house I grew up in. That's not so unusual, there are about a quadjillion of them with the same basic style in the East and Midwest. The owner, Audrey, was a lady about my age, and she wanted to talk. This is sometimes a problem, because we are supposed to finish and move on as quickly as possible. But I just couldn't be unkind. The house was in pretty bad shape. I bought a couple of squash from a little table they had set up in the front yard. I eyeballed her large and handsome turkey towering over the chickens. He doesn't know it, but his days are numbered at about one month.

First of all, she said this house was one that was ordered from Sears as a kit. That was a little surprising, because the Sears houses I've seen before are all much smaller. Maybe I'll blog about this some time. But today's best story was about a tree. Here it is (ignore rain drops on the lens). 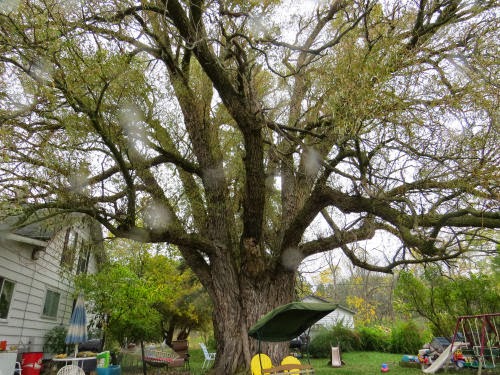 Owners, if they are home, don't usually come out to walk around with me while I'm taking my pictures. If they do, it's for one of two reasons. They don't trust me, or they are talkers. I winced a little as she watched me taking pictures of all the bad places on the roof (even worse than mine), and the peeling paint. But I have to do it. She had the usual story- they are going to redo the roof next year; it's so hard to get everything done; they were going to trim the bushes in the fall but now it won't stop raining. I can't say anything derogatory... I have the same disease.

But as we came around the corner of the house, I commented on the size of this willow tree. She said, "That tree is almost 87 years old." 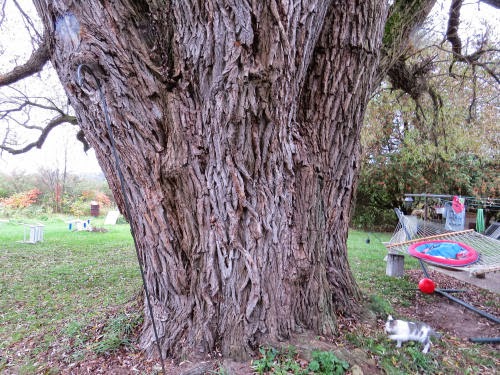 I asked her how she knew its exact age. She explained that on the day her father was born, his father took a shoot from the tree in the yard down the road and planted it in the yard of that house, in 1927. She said it now measures 24 feet around. I can believe it! 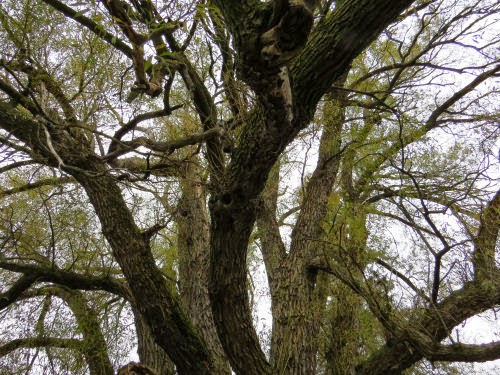 She commented on what a great climbing tree it had been for all her children, but now you need a ladder to get up into the branches. I asked, "It's a black willow, right?" 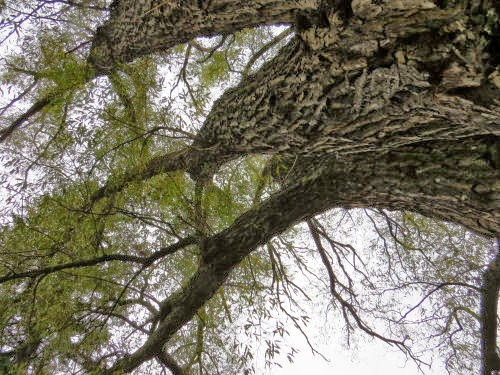 I'd never heard of that, so I looked it up. It's a cultivar of white willow, Salix alba 'Vitellina', known for its golden yellow shoots. I wasn't paying enough attention when I took the pictures, and the yellow color shows up better in the spring anyway.

I think it would be amazing to have a tree that was planted on the day you were born. I wish I'd thought of it years ago and planted one on the days our boys came to live with us.

Hope she does manage to get the roof fixed next year. The tree is in much better shape than the house!

This makes me think of the weeping willow on my old family farm that my aunt planted. I drive by it often now and think of her.

Yea its amazing to have a tree planted the day you are born.

that is a pretty neat idea to plant a tree on the day someone is born.
I remember a willow tree in the back yard of the house I lived until I was 5. I loved that tree

My kids also had a climbing tree. It was blown down in a storm in 2006. Too bad. It was a beautiful tree.

Nice story! When we were young, my parents used to get live Christmas trees and then plant them in the back yard after Christmas. The last time I visited their old property, some of these trees were over 50 feet tall.

We planted a redbud in the yard when the kids were little..but I don't remember how old they were when we did. It was very tiny though, and we put that little sapling in the garden to protect it. Joe even thought a bird sat on it and killed it....but no...it's still going strong!