Four Years is Better than Three


I'm trying to find some way to stay positive about the water situation, but I confess to feeling a little bit whine-y. We haven't had water since Friday evening. I'm not feeling whine-y about the actual lack of running water (I've lived a lot of my life without water in faucets- see Houston, We Have Soup), but more about the level of my involvement in fixing the situation.

I'm more willing to spend the rest of the winter without water than I am in messing around with the well pit again. I realize, this is not an acceptable answer, but it's how I feel. 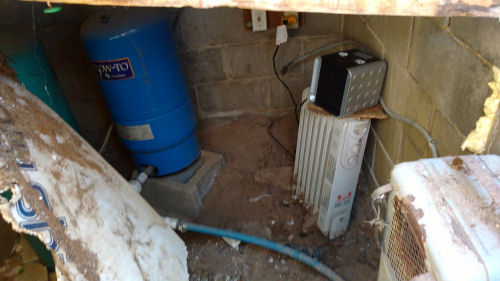 Of course, the lack of water was discovered after dark. I went out to see if the cover I had rigged over the hole after the last episode had gotten compromised, because nothing froze two weekends ago when it got SO cold. The cover was fine, and everything was frozen in around the edges, and it was dark, and I had to go to work. End of Friday story.

Saturday, I was pooped- that was the day I pretty much stayed in bed and read a book. Omer left a message on the pump guy's machine.

Of course, they didn't call Saturday or Sunday.

Monday, Omer left on a trip. I talked to the pump guy and he won't even come till we've checked to make sure it isn't frozen. I tried to explain that once I open this cover, it's just going to be fairly unprotected until it can be closed up tight again. There's no hatchway or door. It's layers of boards, tarp and styrofoam insulation. Basically, they don't care. They aren't coming until I check to see if it is frozen.

But, you may recall that I was doing Girl Scouts all day yesterday.

I finally managed to talk myself into going out and opening the hole this morning. Frankly with my iffy shoulders and wrist that hurts all the time, I won't exactly say that I'm getting too old for this, but it's not a lot of fun.

Anyway... I took the shovel and went out and got one corner open. I guess the heater could have failed in the last week. Some animal has dug in under the block walls and added about 6 inches of dirt to the whole floor. The bottom of that oil-filled heater was buried fairly deep. Would that make it fail? I pulled it out of the dirt (you can see how deep it was by clumps stuck to it.)

I have a little ceramic heater, so I put that in there and it's blasting on high. No water yet... If it's not thawed by morning, I think I can tell the pump guy that I tried.

So, the only good news here is that I thought we last had pump problems three years ago, but it was actually just over four years. Time flies when you're having fun (or water).

That does not sound like fun. Around here if we don't have water we have to look to see if we paid the bill. Having city water does have it's advantages.

Ugh. I hope they come out and fix the darn thing soon!

Life without water can be difficult. Been there. Don't like it.