I found the old pictures, so here is the journey I want to take you on. Lots of pictures, but I think you'll see why. Just beyond the parking lot of the Matthaei Botanical Gardens, and adjacent to the Plants of the New World Gateway Garden is a wetland bursting with, um... wetland plants. 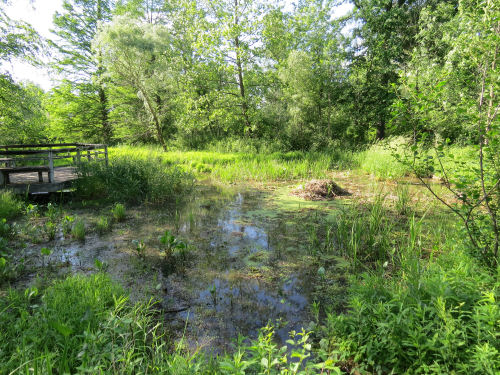 It was not always so! In fact, it wasn't even wet. There was a small drainage ditch that crossed the area and dumped into Fleming Creek. And that was the issue. At the time, MBG used a reverse osmosis system to treat the water used on the plants. Once a month the tanks flushed and spewed out rusty water and a lot of calcium carbonate (chalky water). It was unsightly. Fleming Creek is one of the few remaining wild watersheds of SE Michigan and the Watershed Council was up in arms.

The solution was determined to be a constructed wetland to filter out these contaminants with long-term monitoring and quantification of the environmental health of the water. This was exactly what I was studying, and Dr. Robert Kadlec set me up to oversee the project. He planned the size of the wetland needed to do the job, and we started from scratch.

First the site was cleared with the exception of a couple of trees. The pictures of construction were taken in 1995. 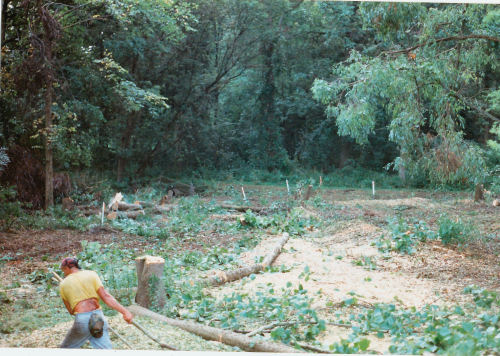 Next came the hog hoe to shape the pond. The construction crew was very careful and managed to save both the trees we wanted and didn't compact the soil around them so much that they later died. 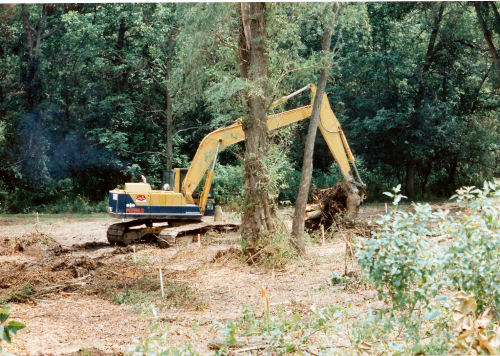 Slowly the deep hole (about 3 feet) began to fill. 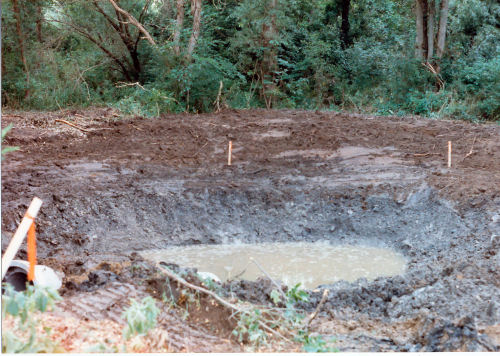 The crew still had to construct the outlet weir that would let the water drain to Fleming Creek. 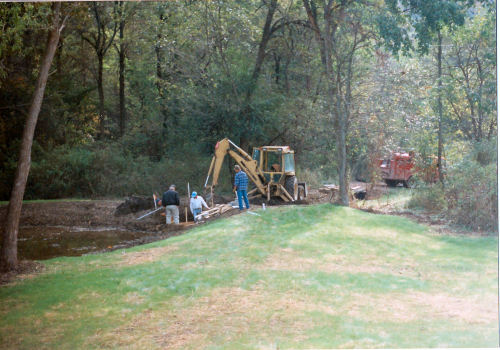 Then a new entrance to the trails was designed, with a bridge across the constructed wetland. 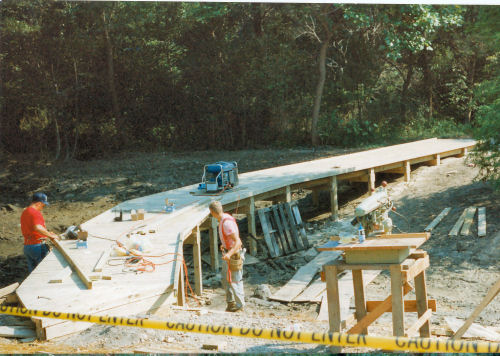 By the summer of 1996, the pond had filled to the desired level and I was trying to establish native plants along the edges. The ducks found the water immediately and raised babies that summer. 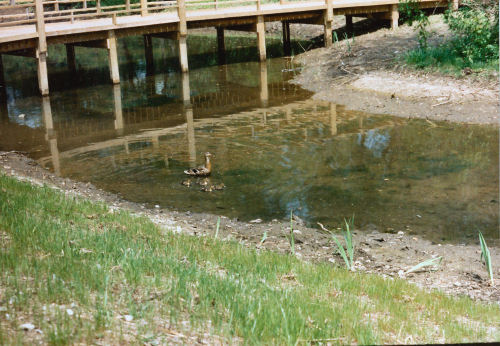 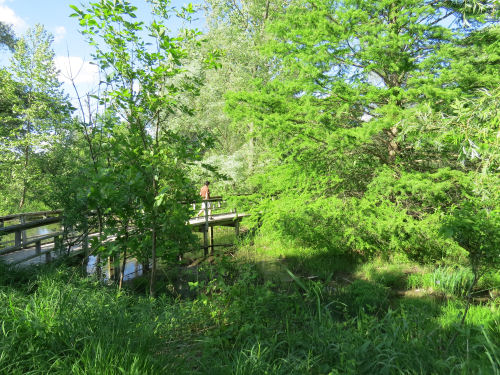 The largest and deepest area of the wetland. I worked like crazy to get various kinds of reeds, rushes and sedges and other flowering plants started there. Some came in on their own. Some I planted. I spent hours and hours (days) pulling non-native plants. 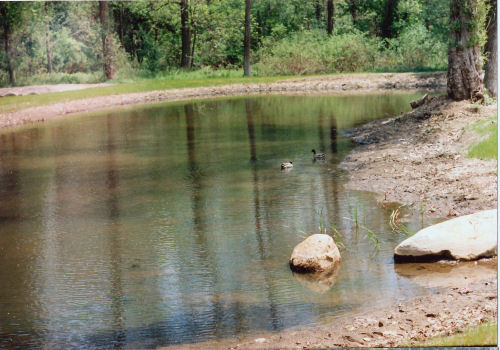 This is the same area last week, although taken from the other direction. 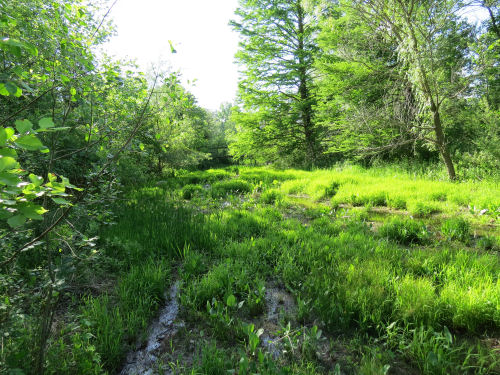 This is one of the trees we worked very hard to save. It's a baldcypress, Taxodium distichum, far north of its native range. So this is a specimen tree, and it likes to be damp. There was a lot of concern about whether it would survive the construction trauma. 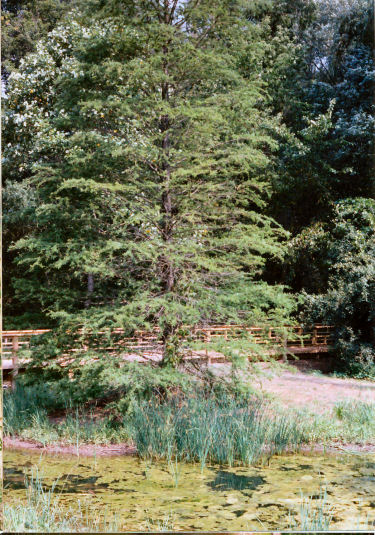 How do you think it did? 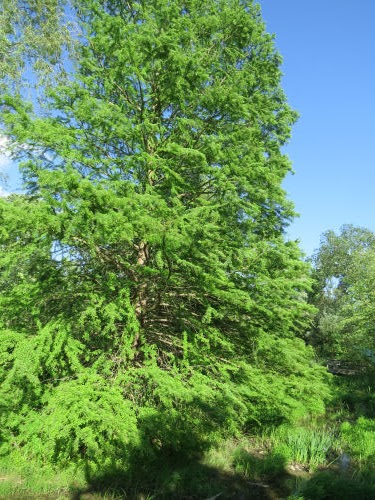 Several years after the wetland was built and the monitoring was ongoing, an effort was made to make the entrance more attractive. Mike Hommel, MBG staff, designed this wall, and then I built it. I envisioned it covered with Virginia Creeper. Guess what? It is! 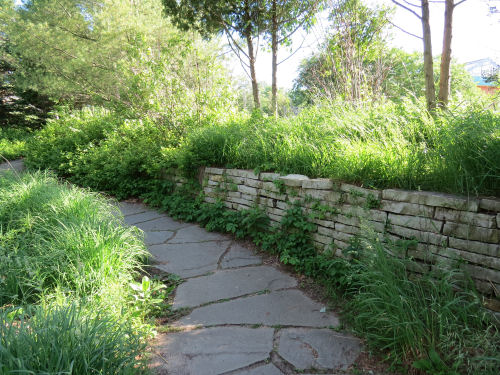 A lot of the plants I worked hard on are gone. Funding to keep up the attempt at maintaining native plants ran out. But I could still see evidence of some of my plantings.

The monthly monitoring determined conclusively that MBG was having no deleterious effect on Fleming Creek. I returned to Ann Arbor once a month for several years after the project was completely finished to pull water samples and do the tests. I had a laboratory and a desk.

I'm pleased to see that the project is still doing its job. It's not surprising how much it's grown in over 22 years, but it was still a bit shocking. I wonder if there might be an aesthetic reason to deepen a spot in the middle again, but all those plants are doing exactly what it was designed to do.

Made me feel good.

Great story. They have started using wetlands in Texas for tertiary water treatment with great success. One of these surface flow wetland has become a huge bird sanctuary. Wetlands are great...

I can only imagine your feelings when observing the fruit of your labor a couple of decades later. This is an interesting story well told.

John- That's great news! Wetlands for water treatment were, I thought, going to be the focus of the rest of my life. Then I got offered a job building and managing web sites... and on and on through whatever wandered my way.

Chuck- it was a bit amazing. I hadn't been back there in over 10 years.