One more day of Matthaei Botanical Gardens "big picture," posts, and maybe a few more individual plants tomorrow. There is so much I could share from there, but other things are happening too, so I don't want to get totally hung up in Ann Arbor.

Anyway, I'll start with the bonsai collection. When I was there it was kept in a sealed off courtyard and the public only got to see them a couple of times a year. There's a club that meets regularly to work on these little trees. A few of the specimens were ones that were started so long ago that I must have seen them way back when.

However, I think my favorite is this one, begun in 2004. I'm drawn to the style that looks like miniature landscapes. That's sometimes called Penjing. I like the design aspect of the single trees, but ultimately the landscapes make my heart sing. This is a larch, Larix laricina. Keep in mind these are real trees, carefully trimmed so they look full grown but are only about two feet tall. 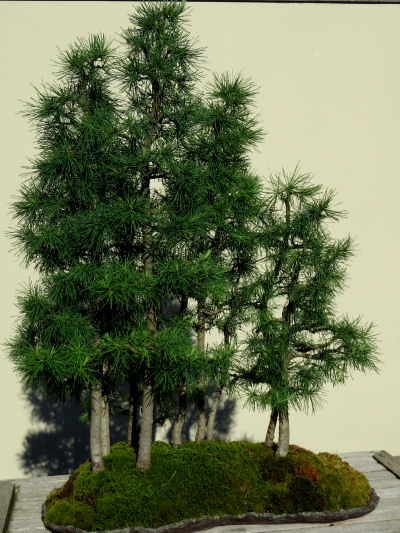 There is a small rock garden. I also love rock gardens. This one is not my favorite style, but it is more traditional. There was one section that had some lovely blooms. 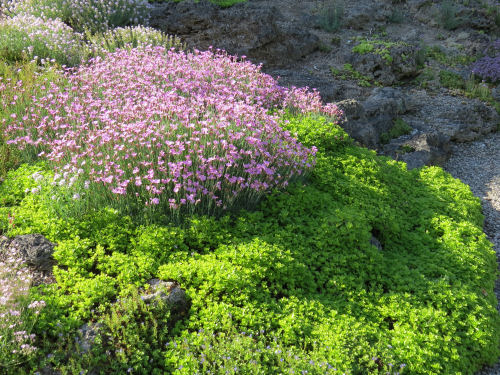 I also wanted to show you the inside of the Conservatory, just to give an idea of scale. This is the tropical room. There is a similar-sized temperate room and a smaller desert house. 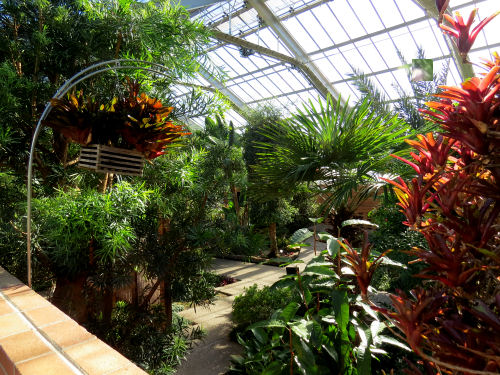 But I saved the "best" for last. It's only best because I also have a strong personal connection with this garden. It's a traditional Tudor Herb Knot Garden.

The knot is in the center design. This one then has four large beds arranged around the knot with paths between. The beds are divided by fragrant, medicinal, kitchen, and everlasting herbs.

The thing is... this garden was built from scratch during the years I worked there. See all those border plants. You might recognize the boxwood with the lighter green leaves. The other border plants that look somewhat blue-green are lavender (herb- pretty purple flowers- lovely fragrance). Care to guess how many of them it takes to surround those garden spaces? I don't recall the number of boxwood, but it's 2000 lavender plants. I know. I planted almost all of them. In one day. In the rain. I only helped with the boxwood... not nearly so impressive a memory.

But, again, from nothing, this is now a beautifully designed space with mature plants and plenty of educational opportunities. 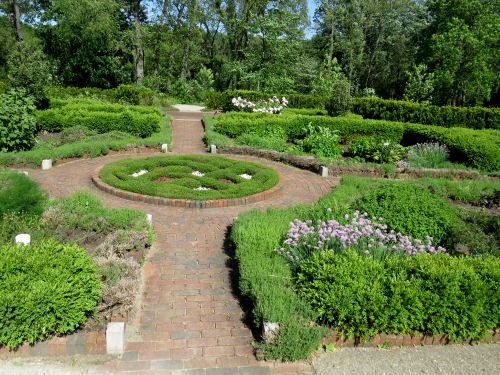 In other news: I did a bunch of stuff for the Writers' Rendezvous, did some other little tasks that seem to take more time than they should, and wrote a chapter in The Bigg Boss. That took a while. I wrote half of it, scrapped it and started over because it was boring- a real snoozer. The newer version is much better. Called my friend Ester, and she helped me craft a missing piece of this entire book to make it immensely better!

I've always been fascinated by bonsai trees. It's amazing what they can do with them.
That garden in the last picture is amazing and that's a lot of lavendar to plant in one day

HI Ann- Bonsai are very cool, indeed. Re the lavender- yeah I was wet, muddy, and totally beat. And I was about 23 years younger.