Here's some of the local (in back of my house) wildlife of the past week. Nothing new, although one of them did something new.

First up is a female widow skimmer dragonfly. I actually got really good pictures of both the female and male in 2011. So, if you want to see them better, follow the link below and click on the thumbnails. 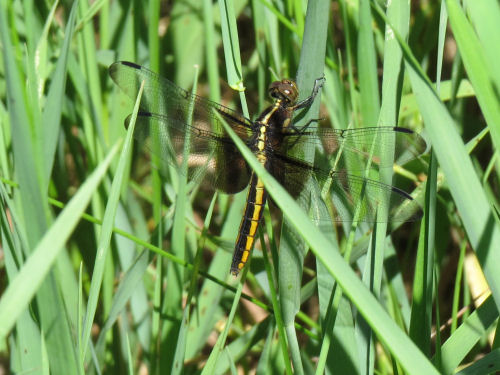 Next, we'll do the plain old whitetail deer. Lots of them, but they do have a certain charm (until they eat all my plants). 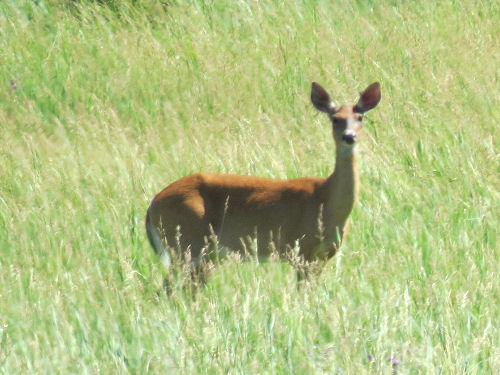 The dead branches at the top of one of my aspen trees is a favorite spot of the birds. Today, a flicker took advantage of the perch. 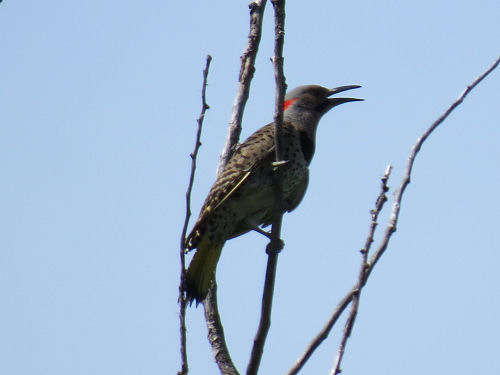 Now it's back to the insect world. This one is a little creepy, but interesting. This is a bracken fern covered with rose chafer beetles. These are annoying brown beetles that will eat certain plant leaves so fast you can almost see things defoliate. They love roses, but also hollyhock and birch. Well, I guess they also like bracken. At least for mating. The ferns in this area were black with pairs of beetles. That's better than all over my rose bush. They don't bite, but they fly and they tickle when they land on you. 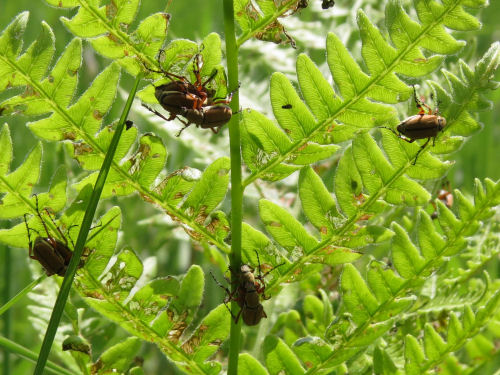 Finally, the oriole. Not that this is a great picture. It's not. But it's the solution to my mystery singer. For weeks, there has been a bird here singing twitter, twitter, cheep, cheep. Over and over and over. I could not identify it or find it. I asked real birder friends. I tried to record the sound (with no success). At long last, yesterday, I heard the singer, saw it fly to the aspen, shot a picture and wow. It's the oriole! This is the first time one has ever stayed to nest around my house. I hope I can find the nest this fall to show you.

He wasn't doing a typical song for an oriole, but they are highly variable. I did find a similar one on youtube, so I'm really sure it's my mystery bird. 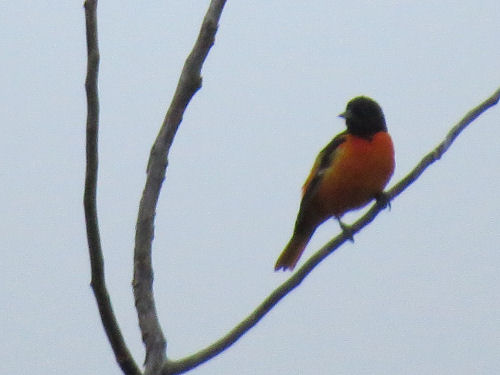 Saw two sandhill cranes today too. The bird I have not seen or heard this year is the meadowlark. Seems odd. They have always been dependable regular visitors.

In other news: I did some things for the Writers' Rendezvous and wrote two chapters in The Bigg Boss. Also made more rhubarb granola. This batch has more rhubarb, and I like it. I have a trip coming up. Not far away, but I'll be gone nearly a week. I think I'll be able to blog though. Stay tuned.

I count the wildlife I encounter each morning when I walk. The orioles have been numerous this year and I have really enjoyed the sightings along with their calls.

We get dragonfly nymphs in the pond each year. They are scary to see...but lovely once they hatch.

Hi Lin- The dragonfly nymphs are the real predators of the pond. They are like meat-eating dinosaurs!