Ester to the Rescue


Today was all about the almost final approach (tomorrow is the final approach) to the Writers' Rendezvous on Saturday. It was a little bit nuts, and Ester upheld her reputation of coming to the rescue.

First, let me point out that we took time to go get some yummy deli items and eat them at the beach for dinner. 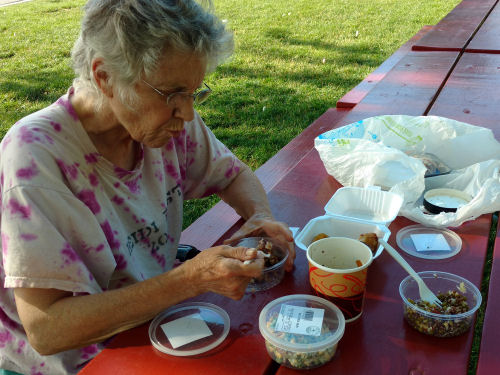 I spent most of the day making cookies. All the rest of the minutes were spent answering emails and putting out fires in relation to the Rendezvous.

Here's the biggest snafu, rescued by Ester (who is coming to help with my book table on Saturday).

So... if one needs office supplies here, one is up a creek. A few years ago, Staples came in and built a small store. This put the local office supply place out of business. Then Staples left. Sigh. I have a business account with Staples on line so I can get free overnight shipping with a minimum order. No problem. Needed colored paper, name tag holders and a couple odd things.

Ordered them Tuesday. They didn't come Wednesday. Tracking said they were delivered to the wrong address. Try again today.

They didn't come today either. Tracking sent me a text that they had just been delivered. Not. This was at 4:00 in the afternoon. I immediately got on a chat with Reynaldo at customer service (I prefer that because they have to type in English no matter how they pronounce the words). He confirmed it was delivered to the wrong address AGAIN. I said "I NEED MY STUFF!"

Meanwhile, I realized that Ester was on her way here and was nearing Muskegon... last chance for an office supply store. Reynaldo said his computer system was acting up and he couldn't figure out where my order had gone, they would re-send tomorrow. I said "NO!!!!!"

Meanwhile, I'm texting Ester furiously to Stop... wherever she was. I caught her just at the Muskegon turn! Reynaldo asked me what I wanted to do. I said, "Issue me a refund." So he did.

I gave the order number to Ester and she got the stuff in Muskegon. She said they were falling all over themselves trying to be accommodating about the order. They only had more expensive name tag holders, but they gave them to me at the same price. Meanwhile, I got an email from Staples that my refund came through, and if the items ever showed up at my house, I could just keep them too.

They'll probably keep my business, since it's the only place I can get overnight delivery on my toner cartridges, but it was good that they tried hard to make it right. Shhh, don't tell them I'm stuck with them anyway.

So once again, Ester saves the day!

We spent the evening putting together info packets for the authors.

3 cheers for Ester and a thumbs down for Staples. That's pretty bad that they delivered to the wrong address not once but twice.