In my dream world where I can have the plants I want and they actually agree to grow, I have lovely shade garden of hosta and heuchera. That's plantain lily and coral bells in common names, although most everyone I know uses the name hosta. Anyway, both are grown more for the lovely leaves than the blossoms.

Here are some healthy hosta at Dow Gardens 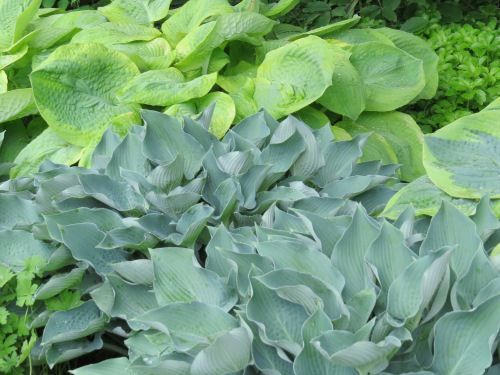 All along a sweeping driveway. 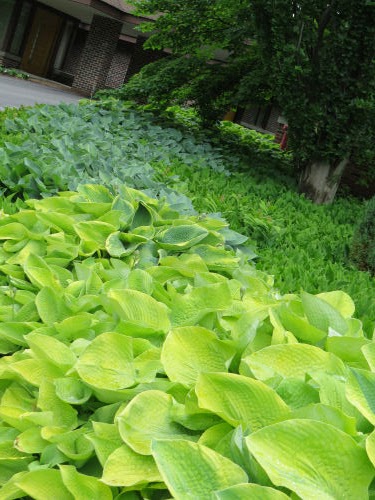 This is a really intriguing color of heuchera which would be wonderful with a dark green hosta. This is called 'Caramel.' 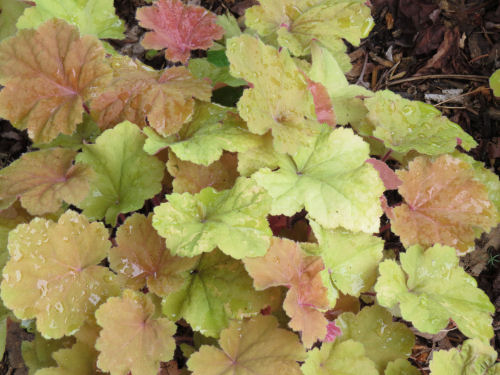 And here's another one that was just getting established in a new bed, called 'Solar Power.' 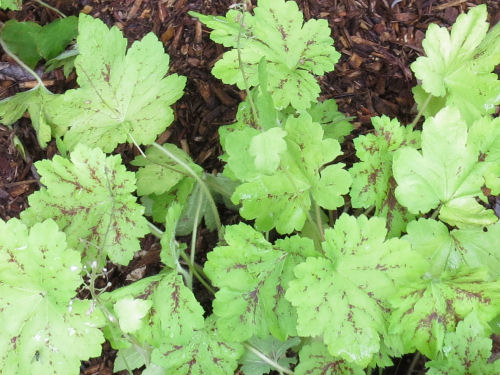 Now for the reality of what I have. OK, I do have a nice bed of Francee hosta. This is one of the oldest and most reliable of the hostas. The deer eat it down and it comes right back. The big one in front of it may be 'Seiboldi.' 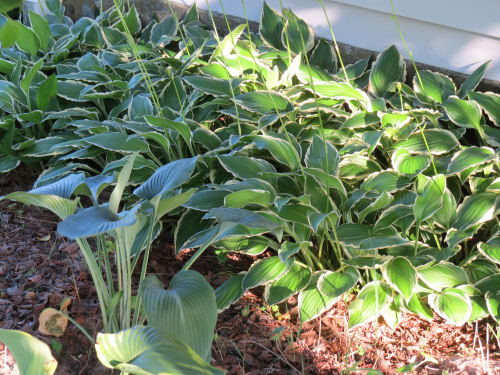 Then, here's a fairly healthy patch of a blue one I bought. That gives me two choices, and it doesn't really look like either one, but I think it has to be 'Blue Dimples.' The leaves should get more of a seersucker look, but they are the wrong shape for my other choice. 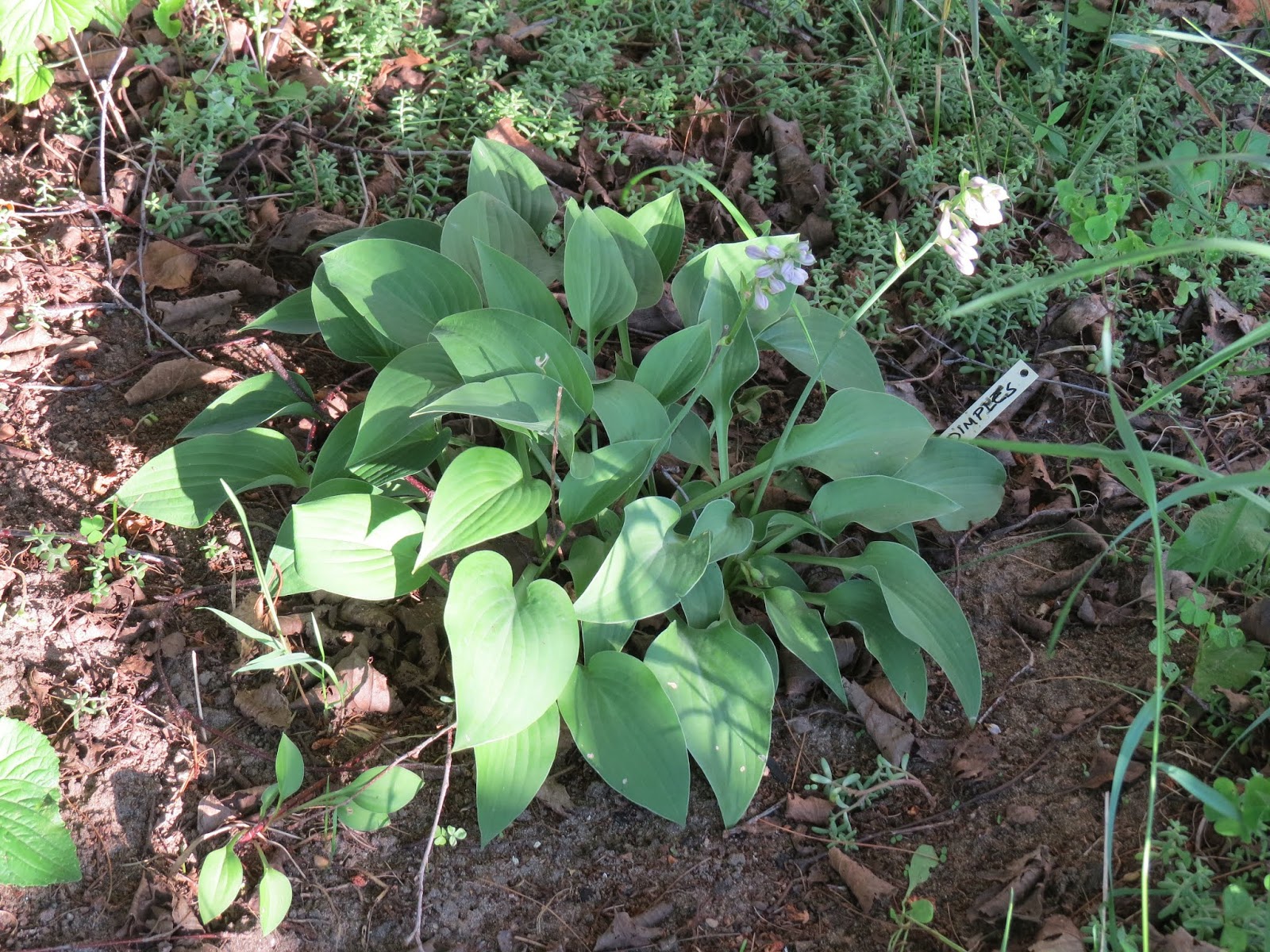 I actually have a few other little puddles of hosta, but the light isn't good right now to get their pictures. Maybe another day.

I will just point out that except for 'Blue Dimples,' I think every single hosta I've paid money for is now dead. I was trying to buy one hosta and one heuchera a year, but that sure didn't work out.

And the heuchera? I have one left. It is one I bought, so I'd like it to survive, I'd like it to get big and lovely. I showed it to you last year, and it's still almost exactly the same size. This is 'Cathedral Windows.' 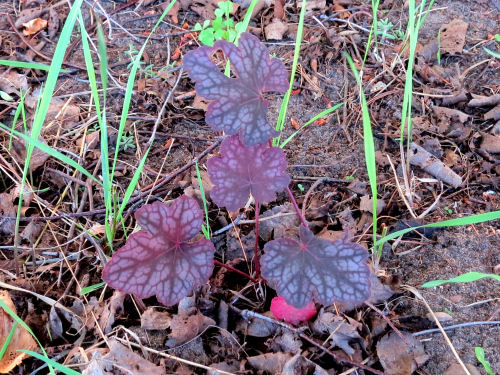 Well, for right this minute, the one garden looks tolerable, and I'm watering it. Yeah, me.

In other news: I worked most of the day at Shagway (and there was good customer traffic), got a fair amount of formatting done on Bigg Boss, I made new flyers for the Dubois Files books, I got some groceries (and a very bad take-out dinner that was SO very bad I'm going to complain about it), and now I have to pack for the Lakeshore Art Fair in Muskegon. I'll be there selling books Friday and Saturday.

I'de have lots of plants and flowers growing in my dream world too...lol
I do have hostas though. The ones I bought all died but the ones I have now were transplanted from someone else and they have done really well.

We've had a lot of rain and sunshine this summer, so my garden is incredible. Just last night, we noticed all the pink flowers are starting to bloom--coneflower, monarda....it's beautiful. I don't have much shade, so not too many hostas.

I have a theory on hostas: There are only 2 types of people--those who want to give hostas away and those who want them. I have to split the ones I have and end up tossing them because nobody wants them. I may have to bring you a carload next time.

Lin- not sure I can handle a carload, but I'd sure take a couple variegated or interesting ones.