Dogs of My Life- Jeremiah 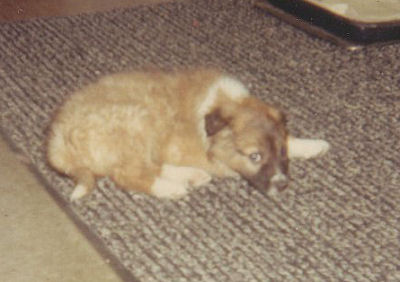 Meet Jeremiah, the third dog of my life, but the first that I owned as an adult, and had full responsibility for. He was a gift from Om's boss, on our first Christmas together, in 1968. His nickname was "Germ." We lived in married student housing, and many of the others had children. They loved having a little furry puppy to play with.

It was very difficult for the kids to understand why they shouldn't play in the street, since it was a little-traveled gravel road. But one day, they were all playing in the road, and a car clipped Jeremiah. He wasn't even a year old.

He mostly had a head injury. Just as it's not a good sign when this happens to humans, it wasn't great for a dog, either. He did recover, but he was never quite the same. The children really understood about the road after that!

The next trauma was one of the more bizarre stories of my life. We were getting ready to move to Michigan, in the fall of 1969. We were doing errands in Marion, Indiana, about 30 miles from where we lived. We were on the sidewalk, and a larger dog came out of nowhere and they started fighting. Jeremiah was losing, and he ran away. We hunted and hunted, but could not find him. We knew he was hurt, there was blood on the sidewalk.

We had to move to Michigan without him. A friend from Indiana kept hunting for him. I was crushed, with the intensity of the young. I prayed and prayed for that dog, as if he were a human. And, in what still seems miraculous to me, a full month later, our friend Harold found him hiding in an abandoned basement. He was thin, frightened, and his coat was matted with partially healed wounds. Harold made the six-hour drive to bring Jeremiah to us. 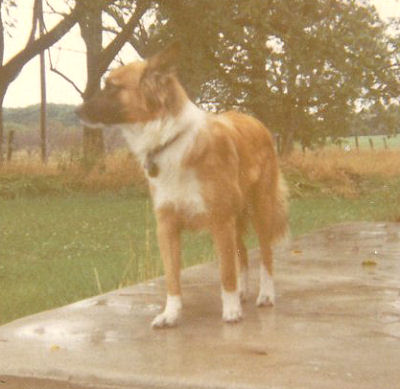 Here he is, at the first place we lived in Michigan. He looks fine, but he was always strange after this. He was fine with us, but would get spacey from time to time. Not exactly a seizure, but something not quite right. 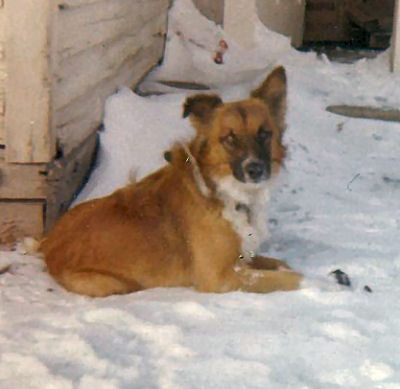 This is just a nice shot of him. 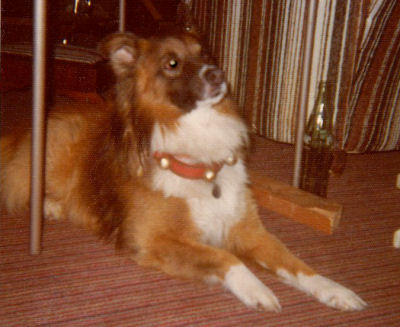 Here's one of the last pictures. He's wearing jingle bells on his collar for Christmas. Talking about past dogs is always going to be sad in the end, because "past" means that they have all died. Yet, this death was surrounded with more angst than others. I had to choose to have him put to sleep. After we adopted Steve, it became apparent that Jeremiah was not going to be able to adapt to having a baby around. He actually bit baby Steve in the face, and that was the wake-up call.

My head knew that there was no other choice between the baby and the dog. My heart couldn't understand why I had to choose to surrender the dog that had been almost miraculously given back to me.

A dog is our best friend. My pet dog always barks to welcome me back from office everyday.

Jeremiah was a very pretty dog. It's always hard to make that decision to have a dog put down under any circumstances. They grab your heart so quickly and there have been several over the years that have left me with some very wonderful memories.

Jeremiah was a lucky dog to you take care of him after his injuries which altered his behavior.
What a tough but necessary decision.

Oh wow. What a very difficult decision that must have been. But it was only in his best interest to have him put down. Apparently he was scared of the baby, and who knows if his past traumas caused him to be that way. You loved him and took care of him better than anyone else could have--he was lucky to have you.

What a heartbreaking situation that must have been...

Poor little guy. I'm glad you got him back.

rainfield- yes, that's one reason I never make it very long without a dog.

Ann- he was a beautiful dog! And he would stand proud with his nose into the wind.

Jean- We knew he wasn't right, but never thought it would come to such a hard decision.

Lin- He was probably getting worse as he aged, it was just hard to admit it.

Ivy- Life is made up of hard and harder choices, isn't it?

Jeremiah certainly was a beautiful dog. It's amazing he even survived the accident, then to live alone after you all had moved away. I know it broke your heart to have to put him to sleep but you really had no choice. I am so anxious to have a grandchild but I worry about how Alex and Laura's two dogs will be with a baby.