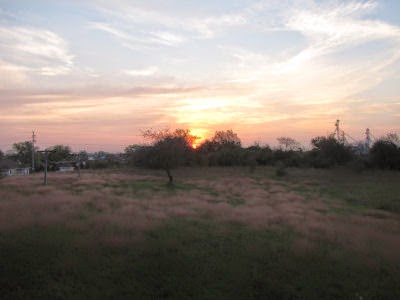 This is a variation of Kitchenhenge, but today, the first day of fall, has something else really interesting going on.

It's called a Super Harvest Moon, when the full moon of September also falls on the Autumnal Equinox. It hasn't happened since Sept 23, 1991, and won't occur again until 2029!

As if that wasn't enough, there is a rare conjuction of the planet Jupiter with the moon. I'm not set up for night photography, at all. But I went to those kitchen steps. The time was 94 minutes before the official equinox. If I had remembered I would have tried to get an earlier picture with the big orange moon. But then I would have missed Jupiter. It's the brighter of the two dots below the moon. I have no idea what other star the camera picked up. But I'm just happy to have caught these two events. 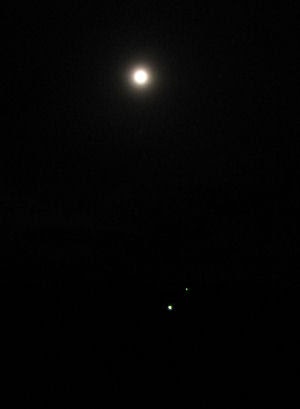 What fabulous photos, Shark! The nighttime shot is incredible!!

﻿-Check out the link for info on my blogaversary giveaway:
http://rnsane.blogspot.com/2010/09/flash-55-friday-happy-anniversary-to-me.html#links

It was our Mid-autumn Festival yesterday (22th-Sept).

We see big bright moon on this day.

Thanks. I am not set up for night pictures either. I took a picture of it.I am linking to your site for my Skywatch Friday post.I have a couple of good sunrise pictures given to me by a neighbor.

I've been watching the Moon's approach to Jupiter. Thought I'd try for a shot of them tonight.

Wow, I have just looked out at our moon and sure enough there are the stars you mention.
Love your pics. Fascinating post.

I was looking at Jupiter last night too! I'm trying to take a photo of the moons :-)

I always miss the cool stuff. I did however see the fabulous orange moon

Love this time of the year (mooncake festival around here)! Even if we don't really get an autumn, the equinox still affects us (longer nights and cooler weather). That's a really cool picture. :)

Carmen- Thanks! I was really lucky in that it wasn't too cloudy at the critical times.

rainfield- how interesting that you celebrate this day. I've seen it on several blogs.

Russ- Thanks a bunch! I bet a lot of people will have pictured it.

Chuck- I'll watch for it.

Glynis- Isn't that cool- you and I can both see the same moon and stars and planets?

John- I see that you caught them!

Ann- You can still see it just post-full.

Ivy- I love that name "mooncake"

vanilla- I am almost straight north of you, so our sky times should be about the same.