We get Sundays off on the A-Z Challenge, but since I try to post every day, I'll bring you a Modern Fairy Tale from Saturday.

Once upon a time, there was a common gray tree frog, minding its own business. And yet, this was a slightly ditzy Hyla versicolor, prone to making less than perfect decisions. However, in its defense, it had never been accused of being OCD.

The frog's name was Post-it. Mama had once gotten lost in an office and had taken note of potential names for sticky things. It was always so difficult to name several thousand babies every spring! Generally, mother frogs don't get too involved with their babies, but this mother was trying hard to be a super-mom. She'd listened to the boastings of several, that day in the office.

That said, Post-it wasn't exactly the roundest egg in the mass.

On the day of Post-it's adventure (if it wasn't all a bad dream), he was sleeping peacefully on the end of a roll of plastic that seemed something like a tree. It was growing out of a small pond surrounded by plastic. The pond was in a dark, damp building which made it pretty safe, under most conditions. Post-it later regretted that he had felt too lazy to change his colors so that he blended in better.

Because all of a sudden he felt himself flying into the air. He'd never taken that long of a jump before, and it was scary. Then... instead of his cool, dark sleeping spot, he found himself out in the bright sunshine. He had no idea how he'd gotten here. 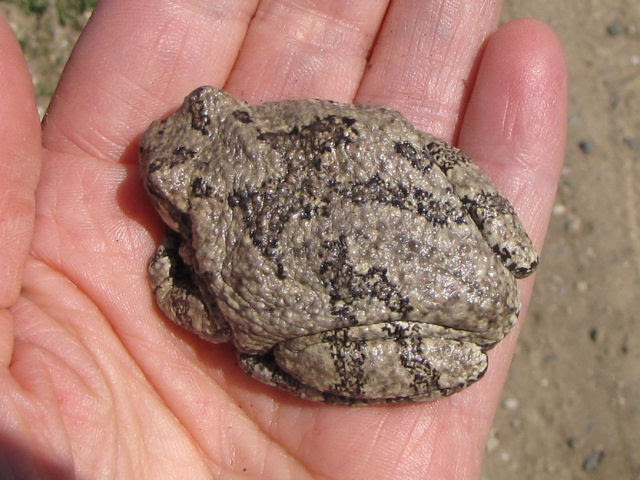 But at least he wasn't falling. He was sitting on something warm. Oh, and light colored. He was supposed to try to change colors. "If only I'd paid better attention in versicolor school," he thought. But it was just too much trouble.

It briefly crossed his mind that if he'd followed the teacher's advice to sit on trees he would have been nearly invisible. He blinked and looked around. 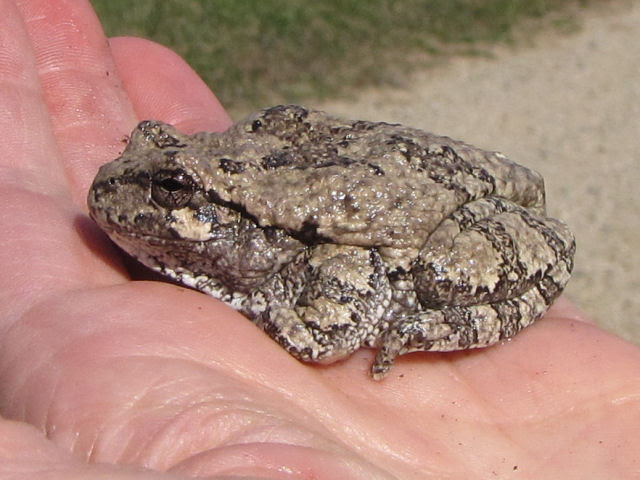 "Hmm, something nearby with eyes, too. But it's too nice a day to get worked up about it. I wonder if it eats frogs? Maybe I should think about that."

Post-it didn't have very long to think because suddenly he was turned over on his back. He'd never liked that position much, but he held on tight. Post-it was nothing if not sticky! That warm thing he'd been sitting on changed shape and pulled his legs out straight. That would scare it off. It would see those yellow flashes and become alarmed! 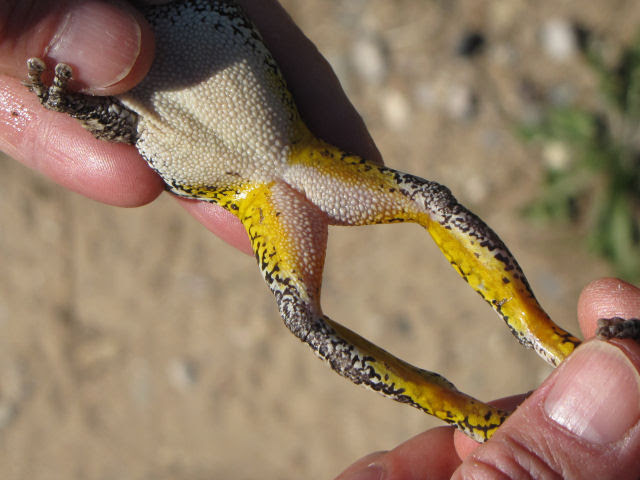 And it worked! After a few frightening minutes, the big thing let go of his legs and let him settle into a more natural position. 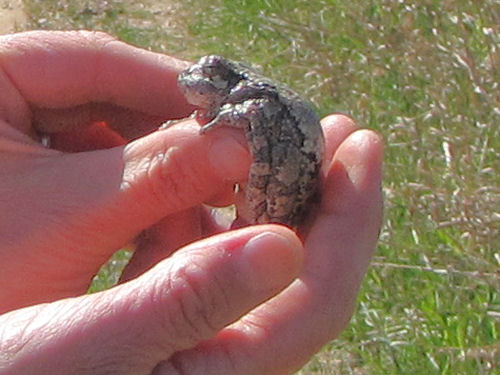 Then, the big thing lifted him up high (well, that was ok, he was a tree frog after all) and tried to kiss him. Yuck! What was the big thing thinking? He tried so hard to remember his lessons.

Oh yes, there was one about the dangers of kisses from monsters. They could change a nice wet froggy into something called a prince. The pictures in the story books had looked awful! Princes had to walk on two legs and cover their nice moist skin with something called clothes. He was glad he remembered that. There was no way he was going to let the monster kiss him. 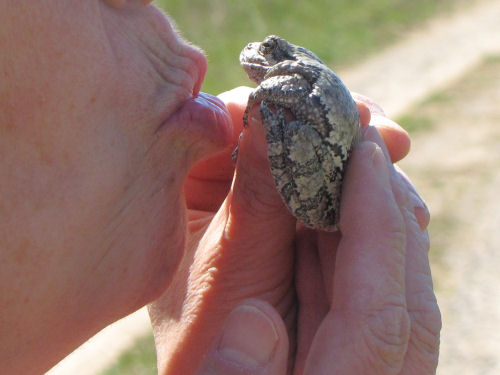 Safe. Post-it was safe. The monster had returned him to his plastic tree in his plastic pond. Being lazy hadn't worked out so bad. Maybe it had all been a dream. Maybe that last fly had been an hallucinogenic. Whatever.

Post-it had a secret anyway. He couldn't be a prince. The monster hadn't noticed his white chin. Post-it was a girl!

Hi, Sharkbytes: The A to Z challenge is a lot fun. Happy posting!

Fantastic pictures to go with your happy-ever-after story :-)

Thanks for visiting my blog. I like the froggy story!

I'll be back! Hope your being challenged!

I love the yellow legs--amazing what nature does, isn't it???

Thank you for dropping by and commenting on my picture! It has been fun on the A-Z train and I look forward to the rest of the month!


A to Z challenge
http://thewritejoyce.blogspot.com

What a cute little story. I loved it! Thanks for stopping by my place, I'll keep coming to look for more awesome writing.

From Diary of a Writer in Progress

Ha ha ha-I loved your story about Post-it. I want more!
Thanks for coming by today.

what a great story. Lucky post it didn't get that kiss, I hear princes are highly over rated :)

Welcome to the A to Z. It's a mighty big challenge! It's nice to meet you! I'm a new follower via the A to Z.

I'm trying to figure out what that damp dark building was.

Thanks for visiting my blog. I loved your story....very creative

That was a very entertaining story! I knew I'd find good things coming back here.

lol - LOVED the post!! The pics were great as well!!

Finally, the fairy tale told from the frog's point of view - and now I know (at least for this species) how to tell a girl frog!

Adorable, and a great story! I read it about three times, it's just so cute.