P is for Pere Marquette River


If you are a regular reader, you have seen quite a few pictures of the Pere Marquette River. It's one of several rivers near where I live, but it's the one closest to me, and I often walk near it. But I thought you might like to see how it fits into the state.

Here's a map from Wikipedia 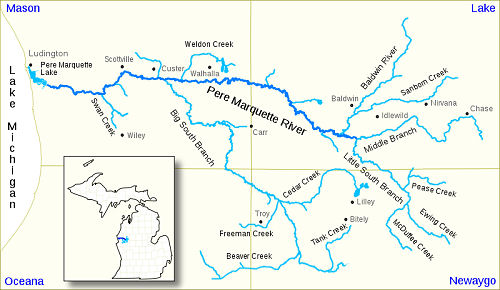 Yes, it's a little confusing with the Middle Branch and Big and Little South Branches. Don't worry about it. Along the main branch, the dark blue, from the east end of the dark blue (Where the Middle Branch and Little South Branch join) west to Scottville, the waterway is a National Wild and Scenic River. This means it has "outstandingly remarkable scenic, recreational, geologic, fish and wildlife, historic, cultural, or other similar values." There are some protections this designation brings.

I decided to show you a picture of the Pere Marquette from each season of the year, beginning with spring. I took this picture a couple of weeks ago at Scottville Riverside Park. 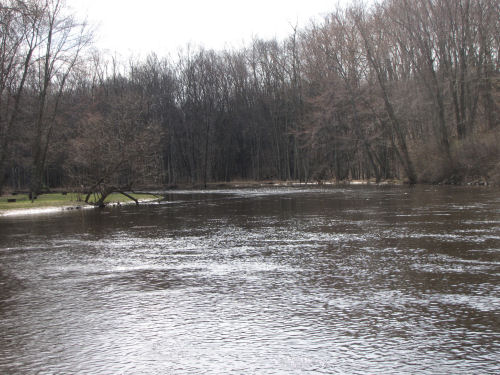 Here is a lovely view of the river near Walhalla, taken in 2007. Fishing is popular in most seasons. Trout and steelhead are the most popular fish. 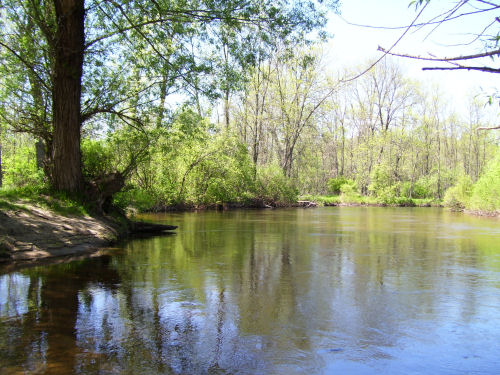 For fall, we'll go to the Big South Branch and do some canoeing. It's a great river for canoes and kayaks- lazy enough to be safe for family trips, but enough current that it's not a complete bore. As you can tell, the scenery is great. 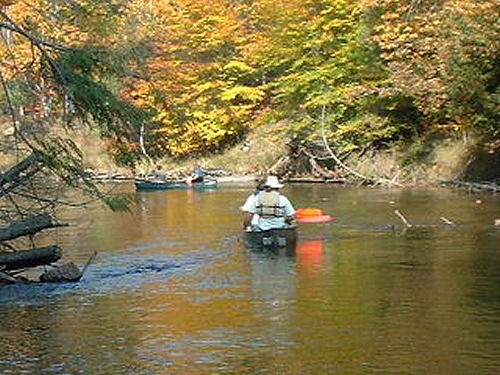 Most winters, the river becomes hushed and magical. For this shot, we are back to Scottville Riverside Park. The river is named for Jacques Marquette a Jesuit priest, who founded Sault Ste. Marie and St. Ignace, Michigan, explored Lake Michigan, and with Louis Joliet were the first Europeans to explore and map the upper Mississippi River. 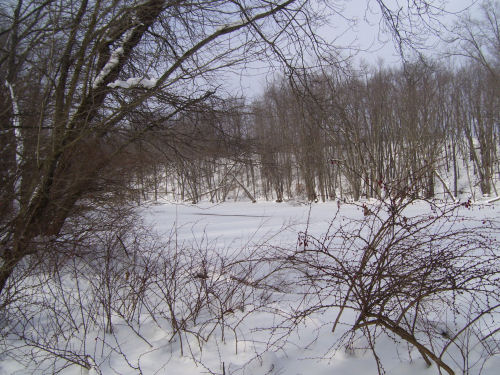 Hope this has provided a little more perspective. I added links to some previous posts about the river.

I've enjoyed this post. My husband and I like to go kayaking. Maybe we'll get to travel to some interesting rivers when we retire. Blessings!

Beautiful pictures. I would love to live nearer a river as lovely as this.

Enjoyed the tour and I got neither wet nor cold!

Kayaking. That is on my list of things to do.

Lovely pictures. I love hiking and camping. Something about the outdoors just fills me up with happy fuzzy awe.

Hi! I'm stopping by from the A-Z challenge. I'm so glad I did. Your post reminded me of the outdoor adventures I've taken with my family. I miss it. Good for you for your outdoorsy lifestyle!

Loved seeing the same spot at different times of year.

Thanks for visiting my blog! Good luck with the rest of the challenge.
-MJ A to Z blogger http://creativelyspiltink.blogspot.com/

The river is beautiful, I also live close to a river and never tire of its beauty!
Hope you're enjoying the Challenge!
Monica, Older Mommy Still Yummy

Yes! It does look lovely!

Paying you a return visit. I live near the mighty Tennessee. Your river is beautiful.

Thanks for the visit to my blog, I too am trying to read as many blogs as possible.
Loved your post. The pictures were gorgeous and I love maps. I am a map geek.

Beautiful river! Thanks for stopping by my blog today & leaving a comment!

Rivers are amazing. I love floating down them.

Love the photos- actually the map too. Thanks for sharing.

Thanks for stopping by my blog recently! I enjoyed your pictures - looks like a peaceful place to go relax :-)