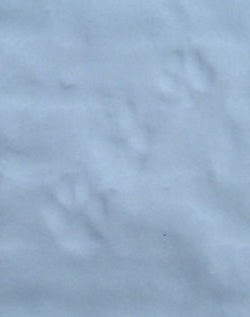 Today I want to show you some more of what I saw yesterday on my hike. I don't think it's cheating to count it for today because I'm still pretty excited about it. One reason winter is so great is because it's easy to see where animals have passed, and some of the things they have done. All of that evidence is called spoor. This is a word that comes to us directly from Afrikaans. So the footprints you see here are not only tracks, they are spoor.

First of all, these are dog-family tracks. You can see the pad and four toes. Usually the toenail marks will show too, since dogs can't retract their claws like a cat. Here, it's pretty hard to see the toenail marks, I think because the snow was packed from the passage of a snowmobile. There is also a ridge on the heel pad of the fox, which does not show well in these prints either. The larger print is actually from the front foot, it just happens to be behind the smaller hind foot print in this picture.

For a short distance yesterday, maybe a quarter of a mile, a snowmobile had run along the same line that I was following. This line of packed trail made a very convenient run for the fox, and probably for some other small creatures that the fox hoped to catch. In my last post about a fox (on my property) someone commented that they would not feel as positive about a fox as I do. But we are not overrun with them at all, and they do a fantastic job of keeping the mouse, rat and rabbit populations stable. Every animal has its part to play.

You may be wondering how I decided that this was a fox and not just some small dog, especially since one can't see those distinctive ridges on the heel pads. The answer is in the scat.

Now, here is where some people may lose interest in this post. But if you just accept that natural processes are part of life then you may find this as fascinating as I did. Scat is simply what wildlife watchers call the excrement or feces of an animal. Knowing what this looks like for various species will give you a lot of information. This can be particularly true in the summer when you may find only a pile of scat, with no visible tracks. Anyway, the picture below is where I first noticed that a dog-like animal had been on the same path, and not too long before I was there. 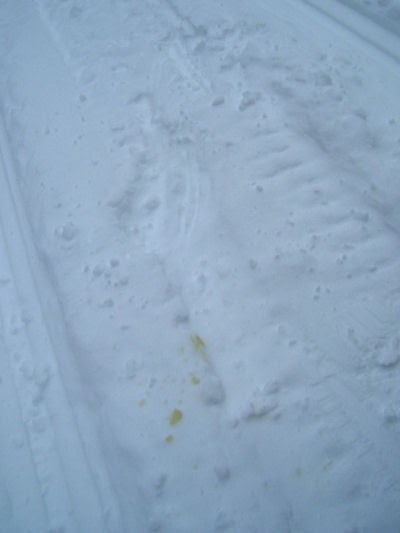 Here you can see where the fox urinated and then made scratch marks to try to cover the spot. It's not clear why canines do this, although one species of female dog has been observed to do so when it is in heat. A little farther down the trail, I found a similar spot that I did not picture. 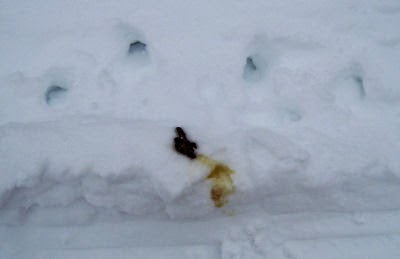 And finally, the fox stopped to defecate. You can see where it planted its feet. From the pattern with urine so near the scat I am guessing that this was a female. And the shape of the scat itself was the clincher that this was a fox, not a dog. Fox scat has pointed ends and is usually filled with hair from all the smaller animals that it eats. Domestic dog scat has blunt ends. A close look at the scat confirmed both of those traits.

The fox and I both followed this snowmobile track until it made a right turn in a direction I did not want to take. The fox, too, did not like that direction, but she bounded off into the woods to the left leaving deep belly prints as she made three initial leaps. Then she resigned herself to walking through the belly-deep snow, and plodded away into the trees leaving a furrow of her passing.

Makes me rather miss living out in the countryside and in regions with real seasons; down here, you just don't get this kind of thing.

I thought I was following the CSI series; good analysis.

Hi Ravyn- I do love the seasons. Sorry you don't get them.

Oh, thank you rainfields. That's pretty high praise. Real trackers would say that I'm just a dabbler, but I do love learning new things, and reinforcing knowledge that I only see occasionally.

oh, this remind me of the footprints on snow i saw when we were up in the Sierra, when I saw it I got scared right away I told my hubby we'll back off and go back to our car, when he asked me why, I told him "I saw black bear footprints", he looked at the footprints and laughed telling me it is small to be a black bear :) anyway i enjoy reading your post. you're very analytical and i admire your love for outdoors, i wish to reach your age and still be up and hiking steadily.

I always like visiting your blogs because you get excited by the same things I do. Finding little things like this are a highlight and I appreciate that you notice them also! It's joy to stop here each day.

Wow, Lin- that's pretty heady stuff. Hope I can live up to that... but just going outside often makes it more likely that I'll be in the right place to see some nifty things!