Last night Om and I went to the local high school production of Flowers for Algernon. It's a pretty heavy play. The plot follows a young man of low intelligence who becomes the subject of a medical experiment. (It's set in the early 1950s) The operation has been performed on mice, most recently one named Algernon, and has been a huge success. They have received permission to test it on a human. 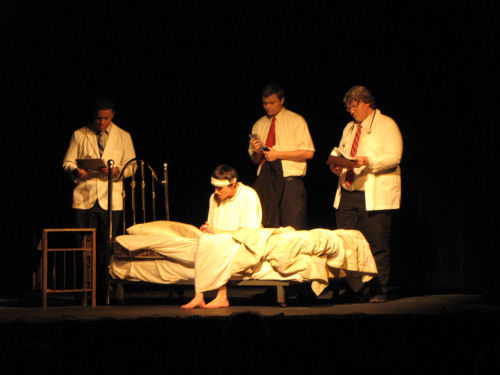 After surgery, Charley begins to get smarter and smarter. He becomes more aware of his social status. He had previously believed that everyone liked him, and he now learns that people have always made fun of him. With all the changes happening in his life now, he's still an easy mark for ridicule. 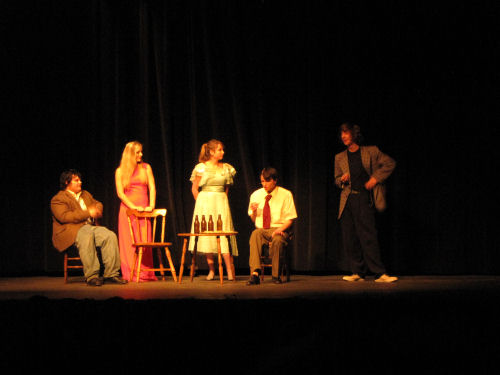 His intelligence continues to grow, and he eventually reaches genius level. However, the mouse, Algernon is showing symptoms that are alarming. When Algernon dies, Charley knows that his time as a "normal" person is short. 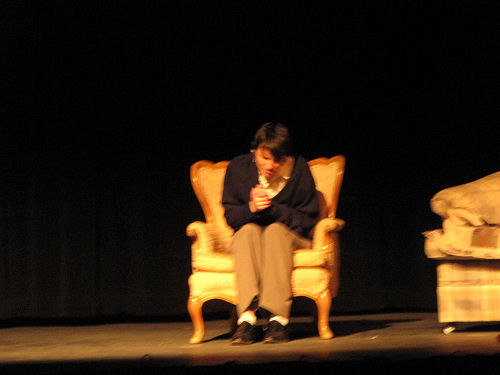 This is a serious play, more often staged by colleges. However, the teens did an excellent job last night. I would say that the five major players were as good as I would expect of college theater, and the boy who played Charley was outstanding. We went because he is the son of a friend, but he really did a great job.

If you ever have a chance to see this play, I highly recommend it.

It is indeed a heavy plot and sad. But true! They say better are those crazy for they are always happy and not disturbed by man's mean behavior sometimes.

I like going to plays but never saw this one. It sounds really interesting! I'm going to see "The Best Christmas Pageant Ever" for my birthday in December at our local community theater and am really looking forward to it!

Very heavy for teens to be tackling. Sounds like a great story line.

Okay, to say I "enjoyed" that story wouldn't be exactly true. Like Brave New World another difficult writing, it has stuck with me for years. What a great opportunity to see it as a play and I'm glad the young people did a good job - certainly a heavy subject!

I'm not familiar with the story but it sounds like an interesting one. Glad you enjoyed the play

Wow! It's sounds like a great play! Don't you love high school productions? I do. We go to them all. Em just played in the pit for our musical. I love how talented the kids are at that age.

What a nice night out for you!

Very heavy material, this play, and it's quite amazing that your local high school mastered it so well. It's nice, too, that they get so much support - and nice for you to have an evening out!