While Viburnums are the Topic...


Viburnums are shrubs. There are over 150 species, worldwide. Some are tropical and evergreen, but many are temperate and deciduous.

Yesterday, I showed you the blooms of the Maple-leaved Viburnum, Viburnum acerifolium. It's usually a small shrub. On the other hand, the highbush cranberry is more like a small many-stemmed tree.

OK... remember these problems with common names. This isn't a cranberry at all. It's just that the fruits are red and tart, so they got that nickname. I've showed you the fruits before. This is a picture from February 2010. 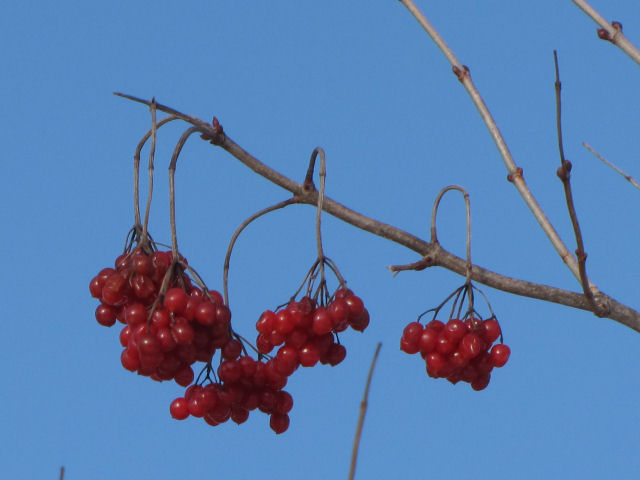 Then, there's another issue. The North American native shrub is Viburnum trilobum. The Old World variety is Viburnum opulus, or is it? The problem is that the two are nearly indistinguishable, but some people claim that the berries of the North American variety taste good, and the others don't.

And then... the European ones were brought here and planted, so they got mixed up too. The ones I see here were almost certainly planted as ornamentals, but I can't really tell that they taste bad. I haven't been motivated enough to pick a bunch and make something. I should, though, because that would be a real test of the taste. Not like just eating one berry.

Some taxonomists now say that trilobum is only a variety of opulus.

At any rate, they have beautiful flower corymb. Isn't that a great word? It's a loose, branched head of flowers with the lower stems growing longer so that the head is flattish. 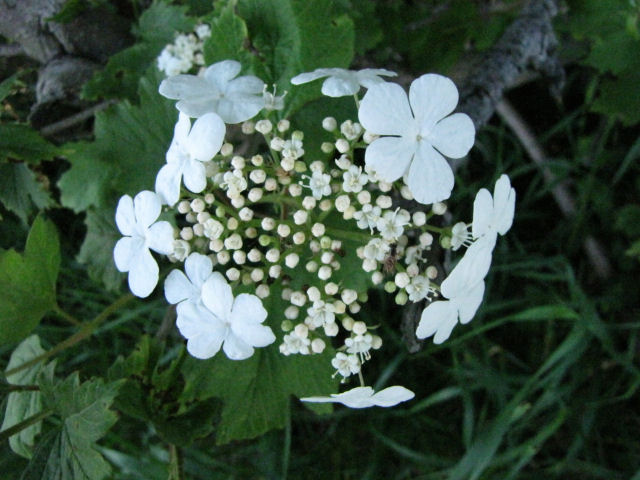 And the corymb has a secret. Those lovely outer flowers are sterile. They are just for show, to draw in insects for pollination. The real flowers are those little guys in the middle. Only a few are open yet in the picture.

Anyhow, the red "cranberries" are still a great temptation.

Well all that sounds to me like it makes it very confusing to correctly identify which is which. The flowers on that are so pretty.

oh i adore these wonderful plants and trees--gorgeous!

I grow one variety but can't remember the name...for fruits for the birds. They are pretty shrubs.
Great info that I didn't know about this plant.

rainfield- yes. I'm going to really give them a try this fall.

Ann- that's the point, you can't tell them apart